Blue Demons CBI journey marches on with matchup against Longwood 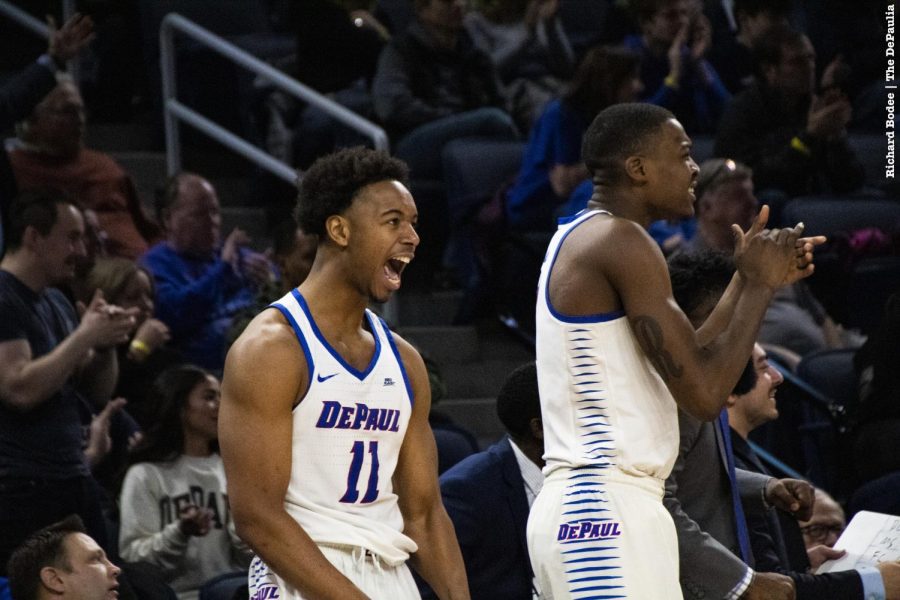 DePaul squares off against Longwood on Monday night in the quarterfinals of the CBI tournament. Richard Bodee | The DePaulia

The most eye catching aspect of the Longwood Lancers, the DePaul Blue Demons opponent for the second round of the College Basketball Invitational, may be the name of one of their star players.

Junior point guard Lorenzo Phillips goes by his childhood nickname Shabooty, staking his claim for best name in Division I college hoops. He played his first two seasons of college basketball at Trinity Valley Community College outside of Dallas before transferring over to Longwood and exploding for 13.8 points, 4.7 rebounds, and 3.8 assists in his first season of Division I ball this season. His efforts earned him Newcomer of the Year honors in the Big South Conference.

Devin Gage, Eli Cain, and the rest of the Blue Demons will have to figure out a way to slow down Shabooty when he and his teammates roll into Lincoln Park for a 7 p.m. bout at McGrath-Phillips Arena on Monday. NBC Sports Chicago Plus will televise this game. This is the first ever meeting between the two teams. DePaul defeated the Central Michigan Chippewas 100-86 last Wednesday in the first round of the CBI tournament. DePaul is 13-3 all-time in games played at McGrath-Phillips Arena.

Since they entered Division I ahead of the 2004-2005 basketball season, this is the first time that the Lancers have qualified for postseason play of any kind. Their 90-68 blowout of the Southern Mississippi Golden Eagles in the first round of the CBI, a team that finished with a 20-13 record and in second place in Conference USA this season, was perhaps the Lancers most impressive win of the season.

In head coach Griff Aldrich’s first season at the helm, the Lancers finished the regular season with 16 wins, their second most all-time (in the Division I era) and a significant improvement on the seven wins the program posted last season. He is a finalist for the Joe B. Hall National Coach of the Year award given to the top first-year head coach in the country. Aldrich was the Director of Basketball Operations for the University of Maryland-Baltimore County [UMBC] team that pulled off a historic upset of No. 1 Virginia last season in the NCAA tournament.  The Lancers 5-11 record in Big South play was good enough for ninth place out of 11 teams in the conference. They bowed out of the first round of the conference tournament after losing 77-71 to Hampton.

Offensively, more than 50 percent of the Lancers shot attempts are behind the 3-point line as they broke school records this season in both 3-point field goals made and 3-point field goals attempted. The quantity (27.1 3-point attempts per game which is 22nd highest in the nation) offsets the fact that they are just average percentage wise from beyond the arc at 35 percent.

On Jan. 31, coach Aldrich dismissed his leading scorer Isaiah Walton (17.8 points, 6.5 rebounds per game) from the team due to failure to meet team expectations (the last game he played this season was Jan. 26). The Lancers are 3-7 since his dismissal.

After sleepwalking through the first 14 minutes of the game, the Blue Demons offense came to life reaching triple figure scoring for the third time this season and pulling away from the Central Michigan Chippewas to earn a first round win in the CBI. The nonchalant 33 points Max Strus poured in puts him at a 27.8 point per game scoring average on 50/50/96.2 shooting splits in five games in the month of March. The Lancers will likely employ junior JaShaun Smith to slow down Strus. Smith has good size (6-foot-5-inches and 195 pounds), can defend multiple positions, and is athletic enough to stay with Strus (49 inch max vertical leap).

If DePaul wins this game, they’d be back in action on Wednesday night in the semifinals of the CBI.