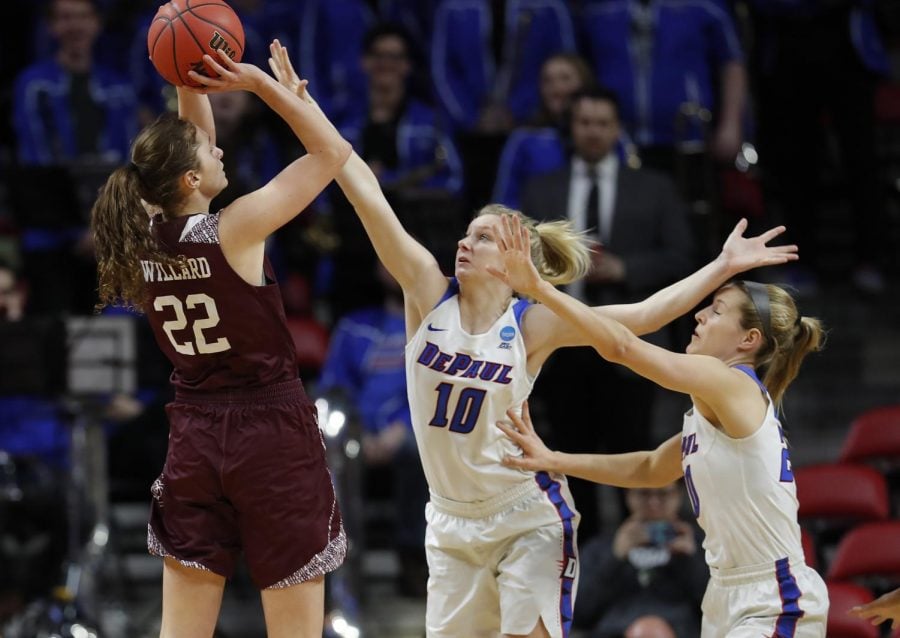 AMES, Iowa — One of the biggest reasons, DePaul had been able to turn around its season since a Feb. 3 loss to Marquette and win 11 straight game was due to an improved defensive focus and rebounding the ball.

That momentum came to a halt Saturday afternoon as DePaul fell 89-78 in the opening round of the NCAA Tournament to Missouri State in Ames, Iowa.

“Missouri State beat us tonight handily — beat us on the defensive side of the ball, on the offensive side of the ball, and they beat us rebounding the basketball,” DePaul head coach Doug Bruno said. “It’s not simple to get into this tournament, but once you’re in what you have to do to stay in is simple. That is you have to defend; you have to rebound. We gave up 40 by halftime and then gave up another 27 in the third quarter, and Missouri State put us in a position that we had to chase and we were just never able to catch Missouri State.”

Coming into the game, it seemed as though DePaul was going to have the edge from the 3-point line averaging 11 threes per game, while the Lady Bears entered Saturday’s game averaging just four 3-pointers made per game. By halftime, however, Missouri State had already knocked down five threes as they opened up a 42-33 lead.

“Missouri State is averaging four threes a game coming into this game,” Bruno said. “They had five in the first half. Manning hit a couple then there’s a drive baseline that caught somebody in the corner for one, you can’t give up 15 points from three to a team that makes four a game. We did not defend and we didn’t rebound from the get-go, first play of the game we switched a ball screen and Franklin got a put back.”

Bruno added DePaul was certainly aware Missouri State was a team that could knock down outside shots after they had eight threes in a win over Drake in the Missouri Valley Conference title game.

DePaul got off to a good start offensively, and as a result closed out the first quarter tied at 23. There was some concern, however, after the Lady Bears shot just under 53 percent from the field and had gained an early edge on the glass.

DePaul struggled to get going offensively in the second quarter as they made just five field goals, shot 27 percent and didn’t get to the free throw line once in the quarter. All of this meant Missouri State was constantly on the attack and that’s where DePaul got in trouble.

“Missouri State was getting the ball out in transition and finding the open players really got our defense scrambling,” junior forward Chante Stonewall said.

The Lady Bears outscored DePaul 19-10 in the second quarter and built a margin that was too steep for the Blue Demons to climb back into the game. Despite some spurts of good offense and defense in the second half, DePaul never got closer than seven points in the second half as they continued to struggle defensively, giving up 47 second-half points.

Coming into the game, head coach Kellie Harper said while DePaul came in on a lengthy winning streak, she felt like they would present problems for DePaul given their style of play

“I do feel like we were not the best matchup for them I felt like the way we play was going to counteract some of the things that they do well against other teams,” Harper said. “We’re pretty aggressive offensively and we play at a pretty fast pace and we felt like we were going to be able to match that. I was hoping we could match it for 40 minutes, I knew we were going to match it for 30, it’s that last quarter that DePaul usually separates themselves from their opponents and our team once we got to that point they just gritted it out for the last 10 minutes.”

Missouri State is the lowest ranked team remaining in the NCAA Tournament and will be the ones to square off with Iowa State on Monday night after the Cyclones won comfortably Saturday evening.

DePaul, on the other hand, ends its season 26-8 and saw a five-game winning streak in opening round games come to an end.