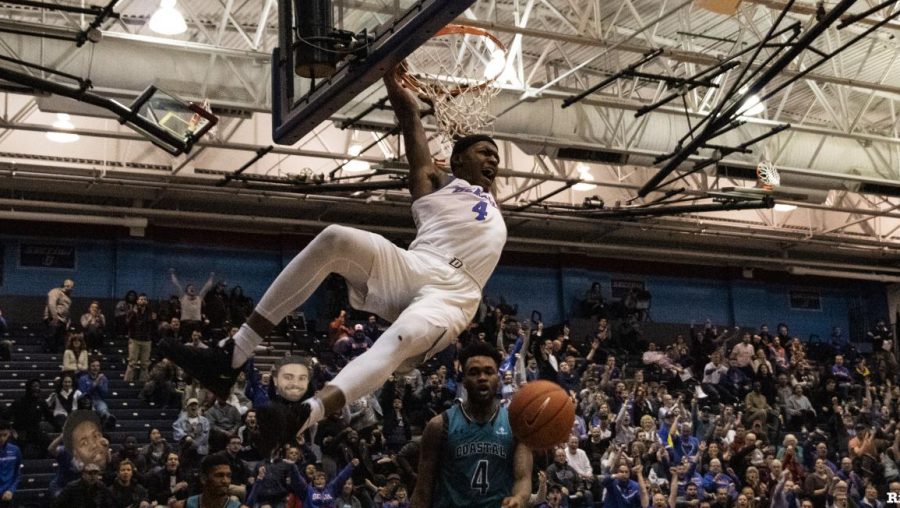 The third game of DePaul’s (18-15) Roman College Basketball Invitational journey had a similar feeling to the first two games and it ended with the same result, as the Blue Demons once again clamped down defensively when it mattered and did enough to walk away with a 92-87 victory over Coastal Carolina Wednesday night at McGrath-Phillips Arena.

While DePaul shot just 4-of-17 from the 3-point line, they were able to score in other ways finishing with 56 points in the paint and added another 22 points from the free throw line. Senior forward Femi Olujobi, who finished with 18 points, said even though they have shot the ball well in recent games, they have continued to emphasize getting the ball inside and taking advantage of the team’s size that also features two big guards in Max Strus and Eli Cain.

“We feel like we can do that every night,” Olujobi said of having 56 points in the paint. “Just across the board I feel like even with the guards we have guards who are big, Eli, Max in there they are able to get in there and score in the paint as well whether it’s off the drive. We have the ability and luxury of being able to post them up as well so we just don’t have to throw the ball to the forwards we can also get the guards the ball on the post and they can abuse mismatches that way and it has been very successful for us.”

After scoring a career-high 23 points against Longwood, sophomore forward Paul Reed set another career-high Wednesday night with 24 points and three blocks. After Strus got the crowd going early in the second half, Reed took over with an impressive three-play stretch that started with an alley-oop dunk off a pass from Strus, followed up by a block on the defensive end and then capped off with a 3-point play to give the Blue Demons a 49-45 lead. Similar to Monday, the sophomore forward made an impact despite having a play designed for him just once.

“He’s growing by leaps and bounds right in front of our eyes,” Leitao said. “I’ve told him this a lot he’s going to put more weight on, more strength, more confidence, his game is going to grow but I don’t know if I’ve been around a guy that does what he does, and again I called one play for him today and he didn’t get the ball when I called it for him. So he does all the things that he does alternatively by just being at the right place, right time.”

DePaul was without redshirt sophomore guard Devin Gage, who hit his head against a Longwood player Monday night and is still being evaluated, although Leitao added the hope is that it isn’t serious and he will be able to return next week.

Junior guard Lyrik Shreiner received his first start of the season and played a season-high 36 minutes while finishing with three points and six assists. Leitao said one of the benefits to having a player like Shreiner is his veteran presence and being able to step in to a situation like this after struggling to get on the court at times this season.

“He very even keeled and he played 36 minutes today,” Leitao said. “For a guy that he sometimes had trouble getting 36 seconds during the course of the year, he defends, he played on the ball a lot today and most of the time in practice or in games he’s always played off the ball and so he gave us some tremendous minutes. He found guys, he went when he had to and he was just solid, he was really solid today.”

The Blue Demons will now have a chance to play for a CBI championship next week beginning with a road game Monday at either USF or Loyola Marymount, who will square off Thursday night in the other semifinal.

While it is not the NIT or NCAA Tournament, senior guard Eli Cain, who entered the program at the same time as Leitao, said the two knew it would be a tough turnaround but to walk off with a championship would be meaningful with a bright future ahead.

“Me and [Leitao] came in together knowing it would be a challenge to turn the program around,” Cain said. “I always say I think this program is heading in a great direction in the years to come. Coach did a really good job recruiting guys that are talented, it’s one of the best recruiting classes in my opinion in the country and I think pretty much everybody else’s opinion also but for me, Femi and Max as seniors to go out with a championship and to have the young guys to have something to cherish and to use to go forward I think it would be huge for the program.”

DePaul will return home next Wednesday for game two at McGrath-Phillips Arena. If necessary, they will host game three on Friday night.