The search for student commencement speakers 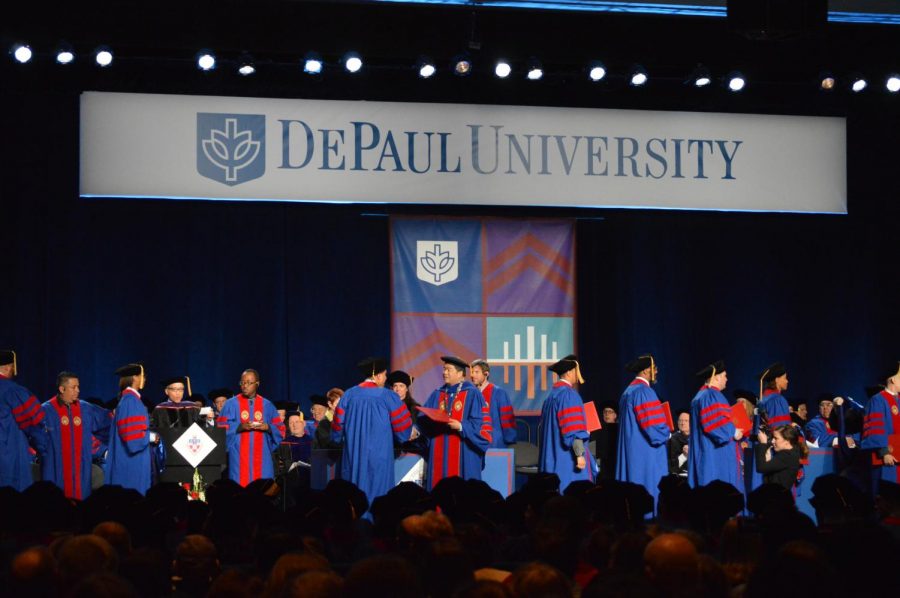 President Esteban congratulates graduates of the law school as they step forward to earn their diploma. Commencement was at the McCormick Grand Ballroom instead of Wintrust Arena.

The deadline for DePaul commencement speaker applications is April 12, but at a university with a large student body, how are student speakers chosen and what does it take to give an address at commencement?

Students are chosen by a selection committee that reviews applications, narrowing down and choosing who they would like to see come in to give a mock presentation of their speech before making their final decisions.

Josh Covell, assistant director of graduate student services and a member of the speaker selection committee, said the committee is made up of one representative from each college and student representatives and staff members from the Office of Academic Events. DePaul’s commencement site also lists representatives from student government as part of the committee.

The application site outlines some of the guidelines the selection committee looks at when evaluating speeches. This includes a three- to five-minute time length, and an ability to keep the DePaul themes broad since speakers, except for those in business, will be addressing students from another school or college.

The submission process requires a one-minute video clip of applicants delivering clips of their commencement speech.

Paty Arreola, associate director of graduate student services in the College of Science and Health advising office and a member of the selection committee, said the video is one of the most beneficial elements when reviewing applications.

“Seeing them recite their speech is very helpful in narrowing it down,” she said.

The number of submissions varies from college to college. Covell said there were 82 submissions last year.

“We’re still not talking a ton of submissions, though, so eligible students who can craft a polished and interesting commencement speech have a good chance of at least being able to audition with their piece,” he said.

Chanell Bell, a 2018 masters graduate from the Theater School and commencement speaker said at first she didn’t think her speech would be selected.

“I kind of knew I wanted to do something different […] kind of like a spoken word thing, which I actually didn’t think would be selected,” she said. “But I guess I just decided to apply because […] I wanted the committee to see that […] it just doesn’t have to be traditional. It could be something else and it could be more inspiring.”

The committee values speeches that take the general college experience a step further and provide a focus on the unique aspects of the DePaul experience.

Covell said he asks himself a series of questions when evaluating applications, including “Have they done the emotional exploration to make a speech that leaves an impact?” and “Have they connected to the Vincentian mission in a meaningful way?”

Both delivering a speech that speaks to the larger DePaul community and finding balance when incorporating personal stories are key elements from memorable past speakers. Barbara Willard, associate professor of communication studies and chair of the selection committee acknowledged what makes a speaker stand out in the application process.

“When a student has content that is able to speak to a broad audience, but also has a compelling story – perhaps about immigration, or overcoming illness or a particular challenge – then that will make them stand out among the pool,” she said.

What about what not to do?

“If you could present your speech any year, you probably need to do a little more to connect it to the present,” he said. “I wouldn’t say that…we want the student speaker’s entire life story, but I think sharing some of what they had to overcome to get there and who was there to help them along the way can be the common thread that connects all of the students in the ceremony.”

Once the student speakers are selected, they must attend rehearsals where they are coached by both their faculty advisor, and then the entire committee, on how to improve their delivery.

“The preparation process once I was selected, that was shocking, but it was also really beautiful because I felt supported,” she said. “They didn’t just select us and then show up on graduation day and you have no idea what you’re doing.”

Bell entered the process with a theater background, which already requires vital public speaking skills, but other students weren’t coming from backgrounds that are as strongly built on public speaking, making the coaching especially useful.

“I kind of got to watch some of their speeches really transform into like an actual performance and that was really cool,” she said.

The day of commencement, speakers often get to spend some time with the president and vice president.

“That part of the process felt like an honor. I guess I didn’t realize how much of an honor being the student speaker is until I got there,” Bell said.

Students who are even thinking about being a commencement speaker shouldn’t shy away from applying, Willard said.

“Take Nike’s advice: Just Do It. You would be surprised at how you will rise to the occasion.”