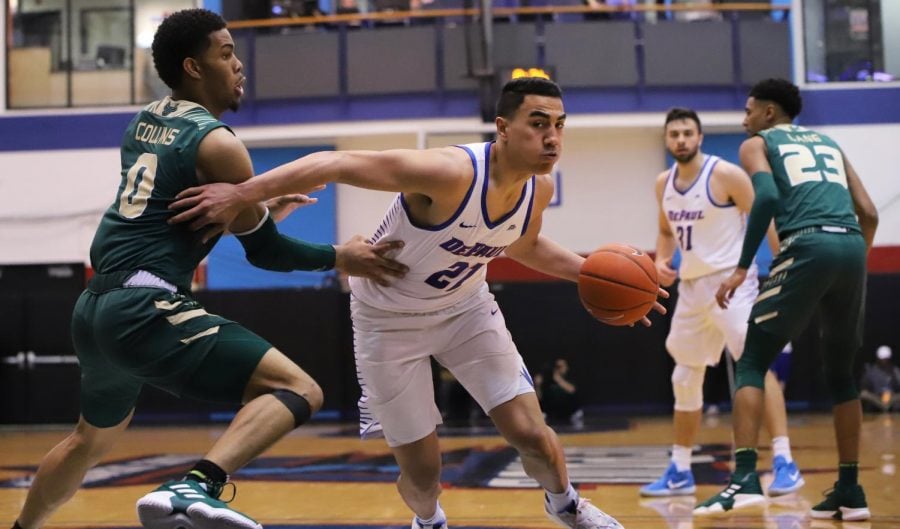 The old adage “next man up” is a common and overused term in basketball; however, for DePaul that phrase applies perfectly in their recent slate of games in the Roman College Basketball Invitational.

The Blue Demons came into the CBI with an already short rotation that only included eight players playing each game. During the regular season three players, Eli Cain, Max Strus and Devin Gage, played over 30 minutes per game, while another three players, Paul Reed, Jaylen Butz and Femi Olujobi were playing over 23 minutes per game.

Already without their junior forward Jalen Coleman-Lands for the entire conference season, DePaul could not lose another player to injury this late into the season. Not only did one DePaul player get injured during the CBI but three players got hurt and were forced to either miss games or sit out for most of them: Gage, Cain and Butz.

Gage suffered a head injury in the quarterfinals against Longwood on March 25 and was forced to miss the following three games. Cain and Butz got hurt in game two of the CBI championship series against USF. Cain suffered a dislocated elbow and wrist after hitting the ground and Butz suffered a right arm injury. After missing the rest of game two, Cain was ruled out for game three and Butz only ended up playing the first seven minutes in the final game.

“Plain and simple, we won that for Eli,” Strus said after game two. “We lost one of our brothers in the middle of the game. We all love him and we had to do whatever it took to get that win out and we all came together and got it done.”

Without those three players in game two, freshman Flynn Cameron and junior Lyrik Shreiner stepped up in overtime of game two to help propel the Blue Demons to a 100-96 win. Cameron and Shreiner scored eight of the team’s 18 points in overtime. But the two would also contribute in other ways, Shreiner would finish with seven assists and Cameron secured three rebounds.

“It’s a very difficult challenge to get those kind of minutes after not getting as many minutes during the course of the season and [Flynn] played hard and admirable,” DePaul head coach Dave Leitao said after game three. “What growth is about is opportunity and seizing the moment within that opportunity. Minutes became valuable, but he would probably be the first to tell you he could have and should have played better. That will come hopefully as he continues to grow and get better.”

Cameron saw more playing time in game three and with Butz not being able to play in the second half, the 6-foot-3-inch guard started the final 20 minutes and played all but two minutes of the second half. While the scoring production wasn’t there as it was in game two, both Shreiner and Cameron proved to be valuable assets off the bench and be spark plugs when the team needed them.

Shreiner only scored three points in game three but his 3-pointer in the second half helped DePaul get within four points of USF. But that would be the closest the Blue Demons would get to the Bulls the rest of the game.

“I’m proud of each and every one of them,” Strus said. “Obviously, unfourntate for Eli and Jaylen Butz to go down, but next man-up and they filled in and played good minutes and did what they could.”

Even without Cain and Butz, DePaul was able to get back their sophomore point guard Gage for game three, and he provided instant offense for the Blue Demons. He scored six of the team’s first eight points, with all six points coming from behind the arc. Gage would finish the first half with 13 points on 3-of-3 shooting from the field, 2-of-2 from the 3-point line and 5-of-5 from the free-throw line. The second half wasn’t as fruitful for Gage; he would only add another six points, but he finished the game leading the Blue Demons in scoring with 19 points in his return.

“It gives me a tremendous amount of confidence, especially with the guys coming back,” Gage said. “Even though I didn’t play the last couple of games I was still mentally in the game. So, I knew coming into this game I would go hard and play.”

Gage isn’t the only player who will be returning next season and can benefit from playing in a postseason environment. His fellow sophomore Paul Reed will also be back next season. Reed, who won Big East Most Improved Player this season, has taken advantage of playing extra games. In game two against USF, Reed scored a career-high 28 points and grabbed 15 rebounds to help the Blue Demons get past the Bulls.

His coach, however, has been saying that he rarely calls plays for Reed. In fact, in game two, Leitao only called one designed play for Reed. He didn’t even get the ball on that possession.

“He’s growing right in front of our eyes into becoming a potentially tremendous college basketball player,” Leitao said after game two. “I laugh at it and I’m going to tell you we called a play for him late and he didn’t even get the ball, so that was the only time today that we called his number. To get 28 and 16 and you’re not getting fed the ball every other time down the court, it says a whole lot about his level of talent and the best is yet to come because he’s just physically and emotionally just scratching the surface of what he could ultimately become.”