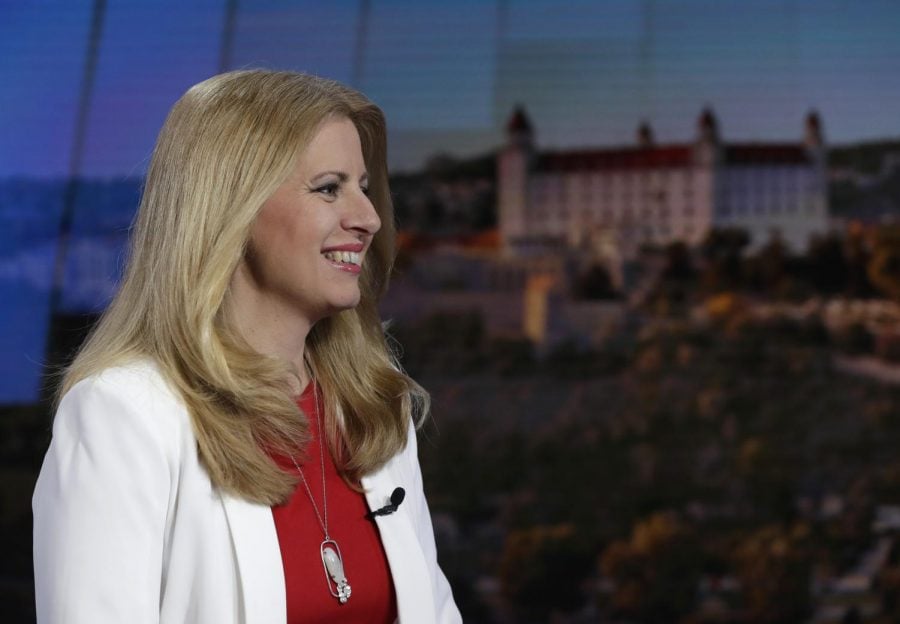 Newly elected Slovakian President Zuzana Caputova smiles in a TV studio prior a debate in Bratislava, Slovakia, Sunday, March 31, 2019. Caputova, a liberal environmental activist, has been elected as the first female president of Slovakia. The relative newcomer had 58 percent of the vote in Saturday's runoff election, topping rival Maros Sefcovic, who had 42 percent. (Petr David Josek | AP)

The world was shocked when Slovak journalist Jan Kuciak and his fiancée Kušnírová were murdered in their home in the Slovak town of Veľká Mača on Feb. 21, 2018. Kuciak had been working on an investigation involving the Calabrian mafia and its ties to influential political and business figures within Slovakia. Thousands filled the streets in the ensuing months, protesting corruption within the government. Among them was Zuzana Čaputová, a then-44-year-old environmental lawyer and activist who in 2016 was awarded a Goldman Environmental Prize for helping shut down toxic landfills in her hometown of Pezinok in western Slovakia.

Prime Minister Robert Fico, whose two tenures were marked in part by threats on the press and waning judicial independence, resigned amid public pressure on March 14. (He remains chairman of the ruling center-left SMER-SD party.) He was replaced by former Deputy Prime Minister Peter Pelligrini; critics warned that Pelligrini, a handpicked Fico successor, would offer more of the same.

Amid the scandal, Čaputová announced in May 2018 that she would run in the March 16 presidential election.

“As head of state, Slovakia needs a peaceful, calm leader able to make connections, trusting in possible change,” she said, according to the Slovak Spectator newspaper. “I do have this experience, and so I have decided to run.”

Among her campaign promises were improved long-term care facilities for the elderly, fighting state indifference towards climate and environmental issues and increasing accountability from the country’s police forces, prosecutors and judges.

International media sat up and took notice when, in February 2019, Čaputová surged to the top of opinion polls before easily winning the first round of elections in early March with 40.6 percent of the vote. Her main rival, Maroš Šefčovič, was backed by the SMER-SD party.

She easily won the March 30 runoff with 58 percent of the vote, becoming the first female president of Slovakia. She will take office in June. But it’s unclear how much she will really be able to change in Slovakia, a former Soviet state in the heart of Central Europe that some experts warn is at a crucial nexus between the democratic gains it has made since its split from Czechoslovakia in 1993 and a risk of illiberal backsliding.

“Slovakia’s in an interesting situation,” said Dick Farkas, a political science professor at DePaul who specializes in post-Communist countries. “Geographically, it’s bordered by Hungary in the south and Poland in the north. Both of those have decidedly and explicitly right-wing governments that are drifting further and further to the right. I think Slovaks are increasingly influenced by that.”

A day before Čaputová was elected, press freedom group Reporters Without Borders warned that despite Kuciak’s murder, “nothing has been done in the past year to improve the environment for the media and strengthen protection for press freedom in Slovakia.” They cited a new law being debated in Parliament that would oblige Slovak media organizations to provide a “right of reply” to politicians for every instance of political coverage in the press. An open letter to Čaputová, co-signed by the European Centre for Press and Media Freedom and eight other press freedom groups, also warned against passing the law.

And while the investigation into Kuciak and Kušnírová’s deaths remains ongoing, with several people charged so far including businessman Marian Kočner, the European Parliament introduced a March 28 resolution voicing “concern about the allegations of corruption, conflicts of interest, impunity and revolving doors in Slovakia’s circles of power.”

“Čaputová won in no small part due to public anger about corruption associated with the current government,” said Erik Tillman, a political science professor at DePaul who studies European politics. “Her status as a political outsider and an anti-corruption campaigner helped her in this regard.”

Čaputová’s ability to effect concrete changes may be difficult, however. Under Slovakia’s parliamentary system, the presidency is primarily a ceremonial, non-policymaking position.

What Čaputová will likely be able to do, according to both Tillman and Farkas, is use her influence to pressure the legislature towards her own democratic, pro-transparency platforms. This includes appointing judges and using her veto power.

These presidential powers may be stronger than meets the eye, according to Navrátil Matej, a research fellow at Comenius University in the Slovakian capital Bratislava (from where Čaputová also earned a law degree in 1996) and an associate researcher at the European Council on Foreign Relations. He pointed to a recent example from 2018 where the current president, Andrej Kiska, refused to appoint the prime minister’s nominee for Interior Minister.

“This event was a matter of debate during the presidential campaign, when some of the candidates argued that this precedent gives considerable powers to the presidential office in [the] forming of new governments,” Navrátil said via email. “Hence, [the] powers of the president in our constitution are open to interpretation and could actually be extended beyond what we understand as her/his ceremonial role.”

A spokesman for Čaputová’s campaign declined to comment, citing a busy post-election schedule.

As many Slovak citizens press their leaders for change, Čaputová will also have to grapple with the rising tide of nationalism and anti-immigrant populism that has surged in other European countries. Čaputová made note of this in her acceptance speech, telling supporters “it is possible not to succumb to populism, to tell the truth, to raise interest without aggressive vocabulary.”

It’s a sentiment that, along with her anti-establishment tendencies, may yet define her inaugural five-year term.

“People in Slovakia are fed up with corruption, mainly after a number of scandals [that] became apparent with the death of investigative journalist Ján Kuciak and his fiancée Martina Kušnírová,” Navrátil said. “Hence, her anti-establishment changes should be understood in [the] context of Slovakia’s ongoing transition and as a process of further and deeper democratization, where stability and predictability of democratic institutions — formal and also informal ones — is of the highest importance.

“This means that she wants to be more vocal on issues that are important in forming [the] internal political life of the citizens and bringing more transparency to the functioning of the judicial system. From her position she can actually shape the political debates and point out what areas are neglected by the government.”