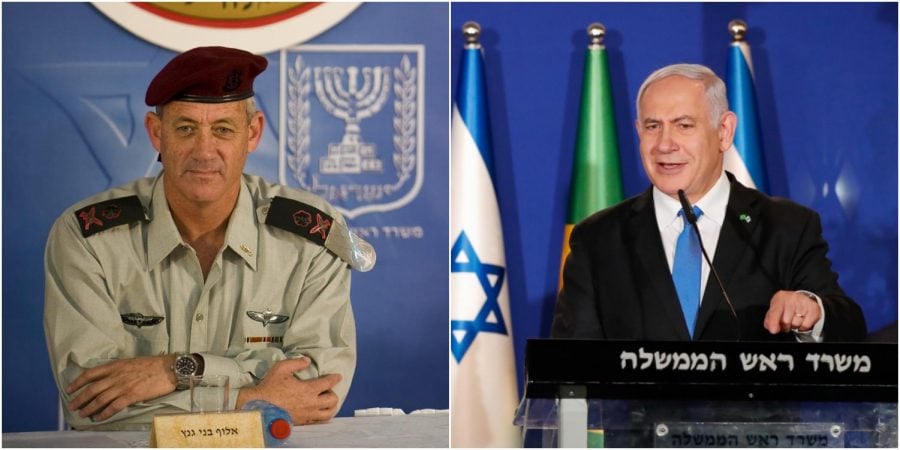 LEFT: Former chief of the Israeli Defence Forces Rav Aluf Binyamin "Benny" Gantz poses at a conference in 2011. RIGHT: Prime Minister-elect Benjamin "Bibi" Netanyahu speaks at a March 31st meeting with Brazilian president Jair Bolsonaro in Jerusalem. Netanyahu was elected to a fifth term as polls closed April 10, 2019, and he appears set to head the next coalition government.

Israelis went to bed Tuesday night wondering if the reign of their four-term Prime Minister might be falling into slumber, too.

But by the time the sun rose on Wednesday, it was clear that Benjamin “Bibi” Netanyahu was, once again, rising with it.

The Prime Minister’s main opponent was Benny Gantz. The former chief of the Israeli Defense Forces ran on a centrist platform to counter Netanyahu’s increasingly right-wing ideology. While Gantz’s Blue and White party was able to rack up an equal amount of seats as the incumbents’ Likud party, Netanyahu was able to absorb enough conservative parties into a coalition so that he ultimately won — a victory not necessarily of popularity, but logistics.

Like U.S. President Donald Trump, Netanyahu relies on a nationalist base and is trying to stave off potential corruption charges. The prime minister-elect capitalized on Trump’s endorsement during the campaign, hanging a poster of himself and Trump from a building in Tel Aviv.

Cécile Shea, a former diplomat and foreign policy adviser who is currently senior fellow on security and diplomacy at the Chicago Council on Global Affairs, said she was surprised by how poorly Israel’s leftist parties performed. While the Meretz and Labor parties have historically constituted a powerful, liberal presence in the Knesset, this week they won just 10 seats combined.

“That’s a sign of how demoralized the pro-peace left is,” Shea said. “The fact that they pulled up so few seats is a sign of the huge changes on the left.”

Shea believes votes may have been pulled from traditional leftist parties and cast in favor of Blue and White.

Daniel Kamin, an international studies professor at DePaul who specializes in the Israeli-Palestinian conflict and Middle Eastern politics, said he isn’t surprised Blue and White siphoned votes from the left. He believes the party is more left-of-center than it let on during the campaign and could have helped Israel move toward peace with the Palestinians — a reason he himself was rooting for Gantz. Kamin likened the situation to one facing Democratic presidential candidates: “Which Dem[ocrat] is most likely to unseat Trump in 2020? The more centrist Democrats or the left Democrats?”

While only about half of Israel’s Arab population turned out to vote amid calls to boycott the election, some commentators argue Arab-Israelis had very little incentive in the first place.

“We have to be real — this is a settler colonial state,” said Riqa Ahmad, a former president and current board member of DePaul’s Students for Justice in Palestine organization. “This is an apartheid state. Do I agree you should work within an apartheid state that literally says your life is not equal to the life of another person? Should I work with that system? I don’t think so.”

Past weeks have seen a surge in violence on the Israel-Gaza border. In late March Hamas, the militant Islamic group that governs the Gaza Strip, fired a rocket across the border, which injured seven Israelis, sparking retaliatory airstrikes and more protests. Hundreds of protestors have been killed and tens of thousands wounded since March 2018, when the “Great March of Return” rallies began.

A spokesman for the Consulate General of Israel to the Midwest, headquartered in Chicago, said the “Great March of Return Rallies” are malignant strategies employed by leaders in Gaza.

“The protests, orchestrated by the terrorist group Hamas, are designed to destroy the state of Israel. That is the purpose of the riots,” press officer and Jewish Outreach Director Renie Schreiber said.

“We regret the fact that people are injured or killed at the border and we wish the situation was different, but we firmly believe that Israel has the right to defend itself,” he said in a statement.

Despite the recent flare-ups, Kamin argues that justice could be attainable for both Israelis and Palestinians if each group had more moderate leadership.

“The extremists in both Israeli and Palestinian camps always seem to be in bed with each other,” Kamin said, adding that, in his view, a less liberal Israeli government may be to Hamas’s benefit because it strengthens their own authority.

Shea asserted that a two-state solution is the only reasonable way toward peace for the region and justice for Palestinians, something that is unlikely to be achieved without a shift in leadership on both sides.

“You are seeing a rise in just despair and hopelessness because they just don’t see a future at this point,” she said, pointing to the Trump administration’s decision in August to cut $200 million from a United Nations program that aids displaced Palestinians. “And that’s an enormous tragedy in this situation right now. When people start to feel hopeless, things can get very dangerous and it can become very hard to move forward.”

In 2017, President Trump officially recognized Jerusalem as the capital of Israel and moved the United States embassy to the Holy City. And just last month, Trump acknowledged the annexation of the occupied Golan Heights by Israel as legitimate. Both decisions break from decades of U.S. foreign policy and the two moves were widely seen as efforts aimed at giving Netanyahu a leg up in the race. Schreiber said the consulate thanked Trump for both decisions.

As for elections, Schreiber said the consulate “never take stances on elections or political parties or candidates.

“The diplomats have to be and take pride in being bipartisan,” he added.

While Jared Kushner, the president’s son-in-law and top adviser, is expected to roll out his long-awaited Middle East peace plan later this month, observers are skeptical it will amount to much.

Through the grapevine of scholars on international relations, Kamin has heard that Kushner’s plan will fall short of calling for Palestinian statehood.

“There’s too much in the peace process of reinventing the wheel. It seems that people should be looking at the last peace talks; that is going to be the basis of a peace deal,” he said. “They can talk about [a] demilitarized state, that’s all flexible, but the notion is there has to be a Palestinian state.”