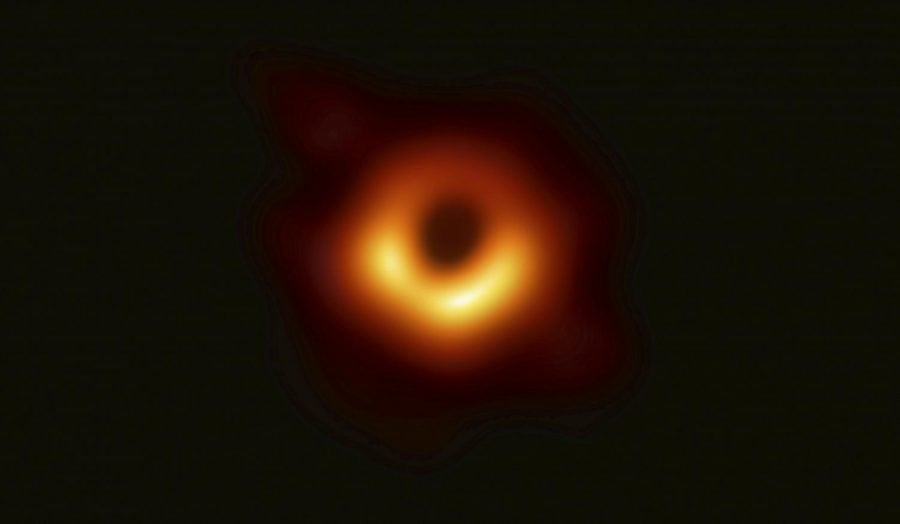 This image released Wednesday, April 10, 2019, by the Event Horizon Telescope project, shows a black hole at the center of the M87 galaxy.

It’s a revelation that has all but confirmed Einstein’s Theory of General Relativity at extremely strong gravitational scales and provided the first direct visual proof of a striking cosmological phenomenon.

The April 10 announcement that scientists had created the first-ever image of a black hole — in actuality its shadow, bending and warping a bright ring of light and gas around its mysterious center — was a triumphant moment for members of the Event Horizon Telescope (EHT) project.

The supermassive black hole lies at the center of the M87 galaxy, 55 million light years from Earth. Black holes exert a gravitational pull so great that even light cannot escape their boundaries; the point at which this phenomenon occurs is called the “event horizon.” The bright ring seen in the M87 photo is a result of the black hole’s gravitational bending effects, which distort light around it.

The project was “truly a worldwide collaboration,” Institute for Radio Astronomy in the Millimetre Range deputy director Frédéric Gueth told The DePaulia. More than 200 scientists from about a dozen  partner institutions contributed to the project, which involved eight separate telescopes linking up for several days in April 2017 to capture data at precisely the same moment with the help of specialized atomic clocks. The data was then captured on helium-filled hard drives and analyzed by massive supercomputers.

According to John Barrett, who worked on the project at the Massachusetts Institute of Technology’s Haystack Observatory, each telescope had two sets of data recorders with four modules each, and each module had eight 8-10 terabyte discs — which only got them through about a day and a half of recording before they had to be switched out. That’s roughly equivalent to downloading one two-hour movie a day for 400 years; according an official press release the telescopes collectively recorded about four petabytes of data, or the equivalent of about 1  million two-hour movies.

Einstein’s 1915 Theory of General Relativity predicted both the existence of black holes and postulated that gravity was a result of the warping of space-time. The detection of gravitational waves by the Laser Interferometer Gravitational-Wave Observatory (LIGO) project three years ago was only the latest evidence Einstein was right; the EHT’s measurements of the black hole at the center of M87 further confirm his theories.

The EHT image carries implications beyond just the physics of black holes: Sera Markoff, a coordinator of two EHT working groups and theoretical astrophysicist at the University of Amsterdam told the DePaulia it will also help scientists learn about the “jets” of radiation and particles that are emitted by the M87 black hole and other celestial phenomena like neutron stars, supernovae and gamma-ray bursts.

“We see the jets directly and we see their effect directly, but until now we could never see their origins,” she said.

Sarah Wellons, a postdoctoral fellow in the Center for Interdisciplinary Exploration and Research in Astrophysics at Northwestern University who was not involved in the project, said these jets can play a role in the formation of galaxies themselves.

“The bright ring around the black hole in M87 shows that it is ‘accreting’ (aka eating) the matter around it,” she said via email. “Some fraction of that mass will get expelled from the black hole system in the form of highly energetic winds and jets before it can fall into the event horizon — and these highly energetic outflows can be strong enough to severely affect the galactic environment.”

One of the next steps will be to use the EHT’s findings to further explore Sagittarius A*, the black hole at the center of our own Milky Way galaxy. While the M87 black hole’s huge mass and relative proximity to Earth made it an easy choice of study for the EHT’s telescope network, Sagittarius A* presents its own unique challenges.

“When you’re looking at M87 you can look at it for days and essentially see the same thing … with Sagittarius A*, because it’s varying over time and there’s also things in between us and the center of the galaxy that scatter that light, it’s much more difficult to determine what variability is due to noise, atmospheric fluctuation or the scattering in between and the actual activity of the source,” Barrett said.

Markoff said that because this type of observation has never been done before, new tools had to be developed to create the M87 image.

“Now we can build upon that work to study a much more complicated, flickering source,” Markoff said.

Barrett said the future of the EHT project lies, literally, in space.

“As we add more telescopes to the array, hopefully we’ll be able to make better pictures,” he said. “And in the long term, it would be nice to expand off the surface of the earth and have telescopes in space that can also add to the array.”