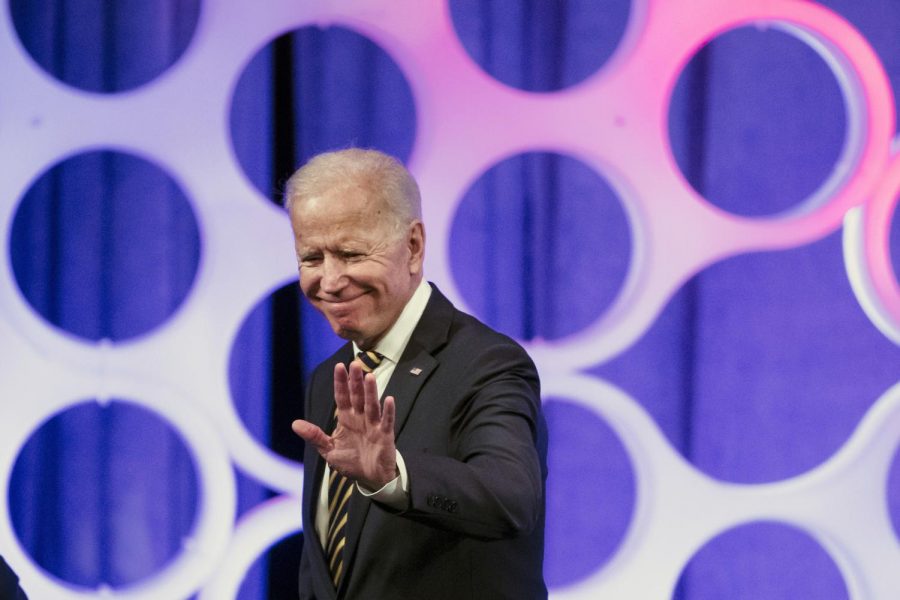 Former Vice President Joe Biden departs from a forum on the opioid epidemic, at the University of Pennsylvania in Philadelphia, Thursday, April 11, 2019. Seven women have so far accused the likely Democratic primary candidate of inappropriate touching and unwanted physical contact.

Former Vice President Joe Biden has been accused of sexual harassment or unwanted physical contact by seven women in the past month. The allegations come before he has officially announced whether he will enter a crowded group of Democrats already running for the party’s nomination in 2020. Biden is undeniably popular: According to a recent Monmouth University poll, more Democratic caucus-goers in the all-important state of Iowa support Biden than any other candidate. However, the question remains whether the allegations against Biden will sink his chances at the presidency.

“I feel as if the allegations might hurt his chance with women, but I honestly don’t think it will affect him all that much,” said first year political science major and Women’s March DePaul founder Riley Reed. “It’s sad but it’s true. White men, especially in politics, get away with a lot.”

Reed said she feels the media has “pushed aside” the story because it’s not seen as serious as the sexual harassment and assault allegations against President Donald Trump. She also believes the respect Biden commands from Democrats will shield him from any repercussions for his actions.

“I’d like to think the Democratic Party would take more action than that, but he’s too respected and is seen as their main chance to win the presidency back,” she added.

The controversy surrounding the allegations thickened when, at an April 5 conference for union workers, Biden joked that he had “permission to hug” electrical union president Lonnie Stephenson. Although many prominent female activists and academics have found problems in the way Biden has addressed the allegations, DePaul political science professor Wayne Steger believes Biden’s favorability ratings, which are the strongest out of all potential Democratic candidates, will remain the same as they were before the incident.

“In regard to the backlash, there is always potential for that,” Steger said. I would simply point out that those folks who are most disapproving and quickest to condemn will be people who didn’t want Joe Biden to be the nominee. People who like Joe will rationalize it. So, it won’t affect much his approval or disapproval ratings.”

President Donald Trump was swift to ridicule Biden, releasing a doctored video on April 4 mocking Biden’s own Twitter video addressing the allegations. The president also ribbed Biden at an April 9 Republican Congressional Committee dinner. Trump, a longtime critic of Biden, has himself been personally accused by over 15 women of sexual misconduct and harassment.

Some say there is a parallel between the lack of consequences both men have faced so far.

“America has a strong history of denying sexual allegations when there is direct evidence, and presidential candidates are no exception,” said Madison Hill, a freshman Women and Gender Studies major at DePaul. “Since he is an older white man, it doesn’t seem like it will stop Biden from running.” Hill added that even though many people, including young voters, will lose trust in Biden, his “circle will always protect him just like Trump’s did.”

As Biden looks to both draw in moderate voters  and unify the party, experts say he will need to do more to repair his relationship with the electorate and women especially. “Biden needs to put actions behind the words in his video,” said Ron Culp, director of DePaul’s public relations and advertising graduate program. “He absolutely must stop making light of the situation and he needs to genuinely understand how women might feel about his friendly embraces. Understanding their feelings is more important for him to grasp than the need to understand his sincere and apparently innocent intentions.

“In short, he needs to exhibit that it isn’t about him. It’s about how the women feel towards his actions.”