A year after ticketing debacle, DePaul students are still willing to pay for extra tickets 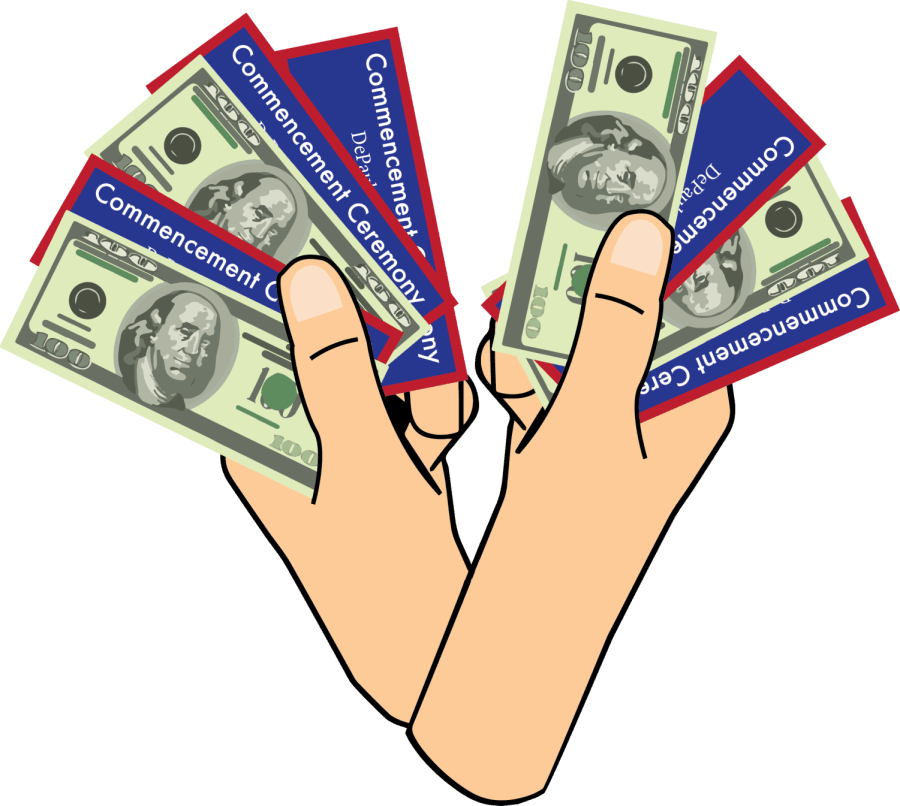 For the class of 2018, the hope of a stress-free graduation was quickly squashed when a new ticketing policy was enforced. While graduates of years past were able to invite an unlimited number of guests to attend commencement in the spacious Allstate Arena, last year’s crop of seniors had to pick and choose their guests in order to accommodate the lesser capacity of Wintrust Arena.

The policy was highly unpopular with the graduating seniors, with many of them taking to the Official DePaul University Class of 2018 Facebook page to express their discontent and offer high sums of money in exchange for extra tickets.

The university has slightly updated their policy by allocating each graduate six tickets – as opposed to last year, when the amount of tickets allowed to each student was dependent on their individual college.

“Because [Wintrust Arena] has seating limitations, a ticketing system was necessary,” said Carol Hughes, university spokesperson. “Many universities, including some in the Chicago area, utilize a ticketing system as a standard practice, so the idea of requiring tickets at commencement is not new or uncommon.”

However, the debacle of limited tickets has emerged for a new graduating class, with students looking for deals on Facebook.

William Hopper, a media and cinema studies major, was one such student, offering “cold, hard cash” in exchange for extra tickets to accommodate multiple family members hoping to attend his commencement.

“The amount of tickets does cover the amount that my very immediate family needs, but considering how supportive my grandparents have been through my whole life— but especially my time in college, it just didn’t feel right to not have them there too,” Hopper said.  “On top of that, my great-grandma wants to come too, and who can say no to their 90-year old grandma?”

Sukina Hassan, a senior studying business administration, said that the number of tickets offered will cover the attendance of her immediate family. However, she remains dismayed that the same luxury has not been afforded to other important people who want to see her walk.

Hassan stated that she was offered additional graduation tickets by a fellow student, at a rate of $100 per ticket.

“I would imagine kids looking out and being generous coming to this time of the year but nope,” Hassan said. “It is definitely sad to see our fellow student community treat other students like this.“

DePaul acknowledged the practice of selling tickets on its official commencement website, discouraging students from selling tickets in an attempt to capitalize on the inconvenience of other students.

“Students are encouraged to share excess tickets with fellow classmates. However, students may not sell such tickets in an attempt to profit from this celebratory event,” the website reads.

Students have criticized this response, claiming that DePaul has done very little to solve the issue it created.

“The first email DePaul sent out said that ‘the university highly discourages students from selling tickets in an attempt to profit from this celebratory event’, which okay, I understand, but come on— they know people are going to be selling their tickets regardless,” Hopper said. “DePaul knows there’s a ticketing issue, but they haven’t said a word about the lottery yet, so what are students supposed to do other than ensure their family and friends can get in by other means?”

In addition to issues with the lack of available tickets, students have also expressed dissatisfaction with a perceived lack of communication involving details relating to commencement.

“I wish there was just more information, and much more communication,” Hopper said. “If you go to the DePaul Class of 2019 [Facebook] page, there’s dozens of people posting almost every day about how they need tickets, and how they’ll even pay for them; people need their tickets, and they’re all freaking out about getting them.”

Despite the student backlash, DePaul remains by its stance that the ticket policy is an improvement.

“After we hold any event, including commencement, we take a look at how things went and how we could make improvements,” Hughes said. “We covered a lot of ground last year, including implementing a ticketing system and making sure graduates, their guests and faculty participants had the information they needed for the day to go smoothly. One lesson we learned was the colleges should be paired differently in the combined ceremonies to more evenly distribute the number of graduates. Doing so would both standardize the length of the ceremonies and introduce more equity into the ticket system.”

Jen Kramer, the Director of University Events, could not be reached for a comment.

“I knew about how much of a mess the ticketing was last year,” Hopper said. “The DePaulia ran a piece on the issues and every senior I knew was complaining about how in prior years this ticketing issue wasn’t happening because we weren’t in Wintrust Arena back then. So I’ve been dreading this for over two years, and I was hoping DePaul would somehow fix the issues with last year’s ticketing, but it seems like there hasn’t been much change in their overall approach this year.”