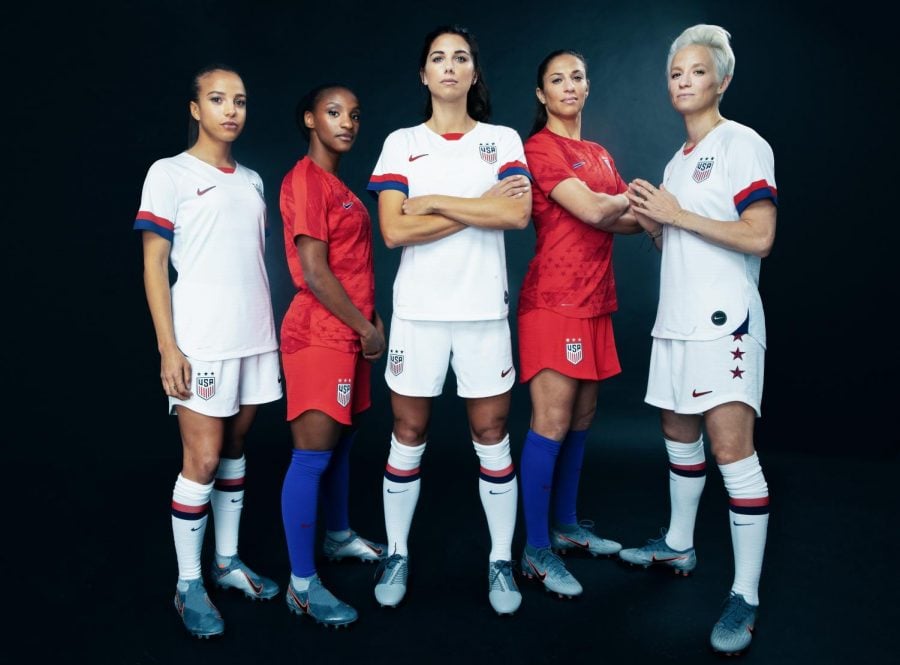 The FIFA Women’s World Cup kicks off this summer in France, with the top 24 international teams battling it out to find who will be the next World Cup champion.

With the tournament right around the corner, Nike has unveiled the home and away uniforms for their 14 Nike federations. The 2015 Women’s World Cup saw the United States Women’s National Team lift the cup, leaving this summer’s competition as the team to beat.

The U.S. National Team has gone out in a Nike kit since before the turn of the century, celebrating two of their three first place victories repping the swoosh. However, since 1995 Nike has only provided a slight derivation of the men’s kit for the women’s national team. Their three reigning titles have been represented on their new kits with three golden stars above the U.S. crest. Compared with their less patriotic 2015 black and white kits with neon green socks, Nike and the USWNT have created a more classic look for this year.

“I remember watching the [2015] World Cup and seeing the team lift the trophy in their weird black-and-green outfits that the men wore and thought that it didn’t represent what the country or team is about. I’m really excited about these new kits though; they look amazing,” Eriksen-Russo said.

The clean all-white home kit with red-and-blue trim on the sleeves is complemented with a symbolic back panel. From afar, the back just looks a little off-color, but as you get closer, you see the extensive detailed print spelling out each of the 50 states. Three red stars are on the side of the shorts, also paying homage to their 1991,1999 and 2015 World Cup wins.

As for the away kit, the all-red is juxtaposed with accents of blue on the swoosh, top of the back and covering the socks. Faded stripes and stars resembling the American flag subtly adorn the whole top, creating for a unique twist on the American spirit.

Gwen Walker, another member of the DePaul women’s soccer team said she would purchase the red jersey.

“It looks so sleek,” she said. “The faded flag is a really nice touch; I think it completes the American look. Our girls will look great lifting the cup again this year.”

Apart from the U.S.,Nike represents 13 out of the total 24 teams in the competition, most of which are unique from their respective men’s teams. The outliers who, by the athletes request, did not change from their male counterparts look from the 2018 World Cup kits are Chile, Nigeria, South Africa and Korea.

Professional graphic designer Wendy Lapchick said the new kits are a step in the right direction. “The next [step] is equal pay for female athletes,” Lapchick said. “Regarding the jerseys themselves. I’m glad Nike took into consideration the differences in the cut of the shirts and kept them professional looking.”

The most notable kits for this upcoming World Cup include the host nation France. The French are going out in an all-white shirt and socks with a hexagonal burst of blue polka dots, which are complimented by their classic navy blue shorts.

England this year features a new hand-drawn floral print on a crush burgundy top used to represent the numerous plants native to the country. The home kit also features this print on their all-white socks with plants like poppies and roses being most prominent.

In recognition of their easily recognizable winter sweaters, Norway has a snowflake pattern that fades all the way down to their home shorts from red to blue. China also has a very unique and symbolic pattern on their away jerseys. The bright orange trim displaces an all-gray top around the sleeves with all orange shorts and socks. The upper has a special white tonal pattern that depicts beautiful birds drawn in a traditional Chinese