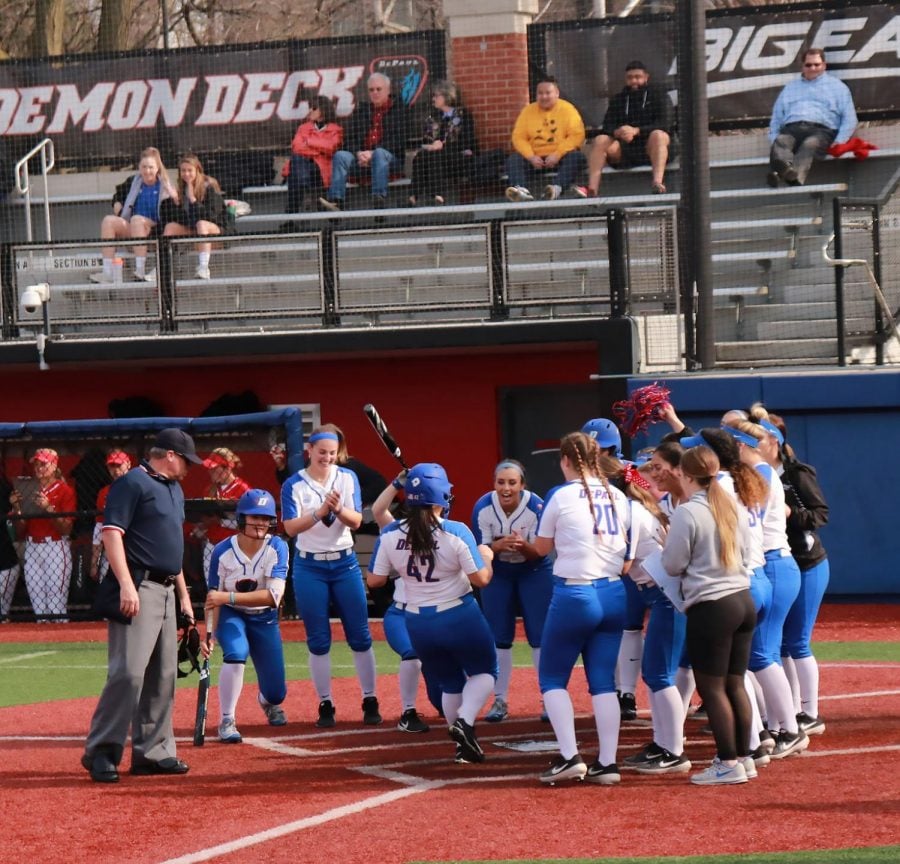 A winning atmosphere was in the air at Cacciatore Stadium as the Big East Tournament champion’s DePaul women’s basketball team threw out the first pitch before DePaul and Illinois State faced off on Tuesday.

After Illinois State forced extra innings in the seventh inning, DePaul managed to prevail in the end with a 6-5 victory over the Redbirds.

The game started with pitcher Krista Dalgarn hitting Illinois State’s second batter and threw 25 pitches in the first inning, but ended up giving up no runs to the Redbirds.

The Blue Demons started off right after Saturday’s hitting barrage. Maranda Gutierrez led-off by hitting a double to left field. Jessica Cothern then brought Gutierrez to the plate with a towering home run that came close to hitting the soccer scoreboard. That led to an early change for Illinois State, who pulled their starting pitcher before she recorded one out.

Morgan Greenwood and Kate Polucha continued the inning with another two hits before Illinois State was able to give up only two runs.

In the top of the third Dalgarn got into some more trouble by giving up a couple of hits and a run that was driven in by the Red Birds’ Riley Hale, which trimmed the DePaul lead to one run.

The Demons then got a huge boost from Alysia Rodriguez, who hit a solo home run in the bottom of the fourth and then a double the following inning that scored both Taylor Young and Angela Scalzitti to give DePaul a 5-1 lead going into the sixth inning.

“I was watching softball over the weekend and heard some commentators say stuff, Rodriguez said. “Just go back to basics and trust yourself because I know my teammates and coaches trust me.”

Illinois state was in no giving mood and came up with three hits the next inning and scored two runs to get back within two.

In the seventh inning the Red Birds put together some tough at-bats and Dalgarn was not able to close the game out. Natalie Halvorson came in to the game with one out in the top of the seventh, after Illinois State had scored another a run on a wild pitch from Dalgarn.

Halvorson was able to limit the damage and hold the Red Birds to only one more run in the inning, leaving two other runners stranded at the end of the inning.

After seven innings the game was tied at five and it was time for some extra-inning baseball.

The first full inning for both Illinois State and DePaul saw a couple of opportunities but neither team was able to capitalize on their chances.

“We actually don’t intervene a whole lot, we kinda put it on them, head coach Tracie Adix-Zins said when asked if anything changes in an extra inning game. “I think it’s huge for [Angela Scalzitti] to get that hit at the end too, just cause she hasn’t been doing as well as she would have hoped to be doing, so to have that kind of finish going into St. John’s this weekend, I think it’s huge.”

In the ninth inning the Red Birds were able to get one hit, but Halvorson shut the door once again to keep the score tied.

The bottom of the ninth started positively for the Blue Demons as Polucha hit a double. Scalzitti came to the plate with a chance to be the hero, and she stepped up in the big moment delivering the winning RBI.

In her at-bat she was able to hit another double just over the head of Illinois State’s left fielder, which led Polucha to come around from second base and give DePaul the win.

“We were kinda joking because it was getting cold out,” Scalzitti said. “We were saying let’s not go back out there, let’s win it now.” She added, “This win should really secure our confidence knowing that we are coming in off a win, off a good win, so just to attack and knowing that we can take three from St. John’s.”

The Blue Demons will now play their most important series of the year so far, as they take on the Johnnies in Queens, New York this weekend, with the winner of the series taking sole possession of first place in the conference with two more conference series to follow.