COMMENTARY: Moving to Soldier Field will make or break the Fire 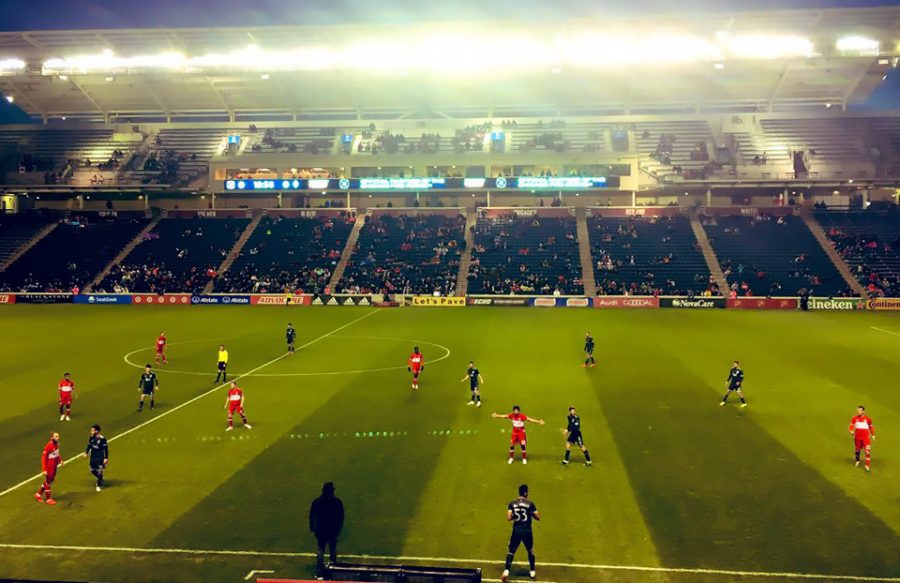 Only 10,439 people were in attendance for the Chicago Fire game against the Vancouver Whitecaps on April 12 at SeatGeek stadium.

The Chicago Fire are irrelevant in the greater Chicago sports landscape. If the Bears and Cubs are garish hydrangeas, the Fire are dead tulips in the back corner of the garden. They haven’t bloomed in two decades. The gardener gave up on the tulips and now focuses solely on cultivating the healthiest, most attractive plants.

Tulips, like the Chicago Fire and Major League Soccer, are mysteriously attractive when fully blossomed, but they’re monotonous in a lawn packed with more attractive flowers.

The Fire play at SeatGeek Stadium in Bridgeview, a southwest village that’s been the home of the club since 2006. This location has not benefited the Fire’s attendance rates over the past two years. According to the website SoccerStadiumDigest, the Fire averaged 14,806 fans at home games in 2018. They were second to last in the league, beating only Columbus Crew’s 12,447 average attendance. Clubs like Atlanta United and Seattle Sounders, the top franchises in the league, routinely drew crowds of over 40,000 people. WorldSoccerTalk estimated that in 2018, MLS home games boasted, on average, 21,874 fans per match.

The Fire boasted well below-average attendance last season, and this season has been even worse. The club is finally doing something about it.

Last week, the Fire announced they are moving out of SeatGeek Stadium and into Soldier Field for the 2020 season and beyond. Along with this move, there’s a rumor the team is considering changing their name to Chicago City Football Club.

“If the Fire are successful like they were in the late ’90s, I think the move has a lot of potential,” said Ryan Witry, a DePaul student, general manager at Radio DePaul Sports, and member of Sector Latino, a Chicago Fire supporters group. “I know people here at DePaul that are soccer fans but have zero interest in the Fire, and moving to Soldier Field won’t fix that.”

The Fire were founded in 1997 and won their lone MLS Cup in 1998. Since then, the team has made the Cup final twice, lost both times, and hasn’t come close to repeating their early success. With only two playoff appearances this decade, soccer fans in Chicago have spurned the Fire in favor of supporting Major European clubs.

In general, attentive fans are largely skeptical of any major decision the club makes. The team has been a stain on Major League Soccer for most of the decade, and there is a backlash against the club’s majority owner, Andrew Hauptman. Some fans believe his investment in the team is half-hearted and distant.

Hauptman signed German superstar Bastian Schweinsteiger in 2017 after the decorated midfielder left Manchester United. The move helped revive a dying excitement level surrounding the team. They made the playoffs for the first time in five years after Schweinsteiger arrived at the beginning of the 2017 season.

Kyle Downs, like Witry, is a loyal supporter of the team. He believes the move to Soldier Field could boost youth interest in the team, but he’s completely against the club’s potential rebranding.

“I think moving back to Soldier Field will be a massive boost for the Fire,” Kyle said. “It will not only help the city identify with having a soccer team; it will bring younger fans to the game who have a hard time getting out to the suburbs.”

Although he’s in favor of the move, he loathes the idea of changing the team name.

“As a lifelong fire fan, I am completely against a rebrand,” he said. “The Fire badge, to me and my friends, means everything to us. We don’t want to forget the past. We want to use it to learn and establish a better future.”

The team rebranding is only a rumor. The decision has yet to be made, but there’s strong speculation surrounding the idea. Some fans, like myself, believe they will go through with it.

Colin Scharf is a student and soccer player at St. Ambrose University in Davenport, Iowa. He’s been a Fire fan his whole life, and he believes the team is attempting to emulate European clubs by changing their name to Chicago City Football Club.

“It’s like they’re trying to make themselves look more like Premier League teams,” Scharf said. “Why change the name? People know who they are. Plus, there’s all the team merchandise people already have. When you go to a Fire game, almost every person has a shirt or jersey with the team name on it.”

MLS franchises like Sporting Kansas City and New York City FC have, for lack of a better term, “European”- sounding club names. Rather than branding their team with a nickname, they chose “Sporting” and “FC” instead. If the Fire change their name, the impact it will have on fan interest is debatable, but Matt Dunphey, a local Fire Supporter, believes it could be beneficial in a slight way.

“The upside is that it [the rebranding] comes off as a new team to Chicago, and it may spark new excitement,” Dunphey said. “The downside is that I’ll miss the Fire team I’ve grown to love and established tons of friendships through.”

The potential upside for the team is significant, moving to the heart of the city could boost interest immensely, but for now, we speculate its impact. When will this team start winning MLS Cups again? When will we make the playoffs more than three years in a row?

The safest, best way to draw fans to Soldier Field is by winning games consistently. We want championships, not a new stadium location.

Fire fans want the team to bloom again. They’re tired of supporting the dead tulips of the Chicago sports landscape.

Maybe, if the move pays off, the team will gain attention through winning games in a louder, more packed stadium. Tulip are revivable.