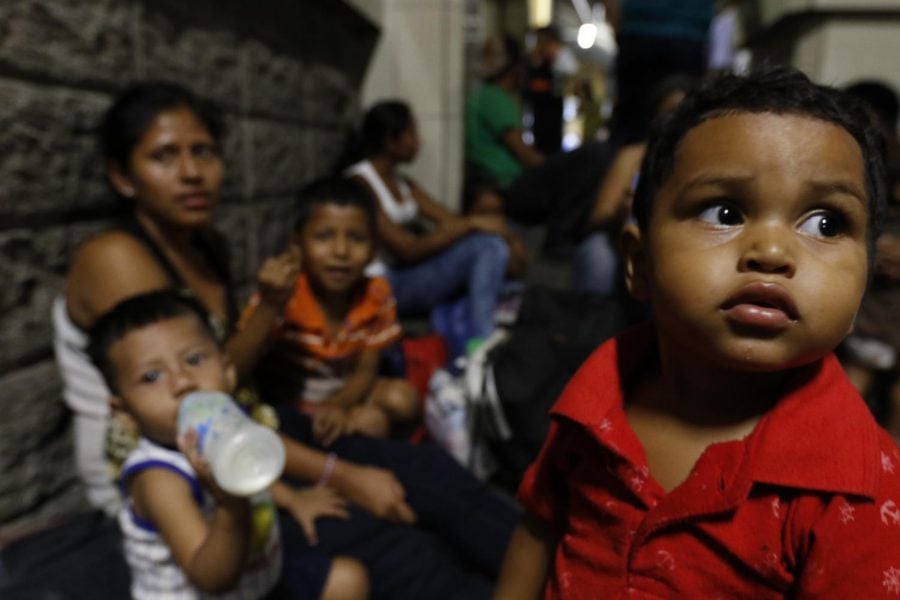 Migrants planning to join a new caravan of several hundred people wait in San Pedro Sula, Honduras, Tuesday, April 9, 2019. Advocates warn that if the Trump administration cuts aid to Central American countries like Honduras, the humanitarian crisis in these regions will only grow.

During the past year there has been an increase in Central American migrants making the perilous journey through Mexico to the United States Border. The influx of people migrating specifically from Honduras, El Salvador and Guatemala, otherwise known as the Northern Triangle, is due to violence and a lack of jobs in their home countries.

The increase in the number of migrants seeking refuge in the U.S. has been unpredictable, leaving many legislators and advocates alike to look for solutions. Detention centers and border patrol officers have become less and less dependable amid a growing number of people seeking asylum.

Ahead of the 2018 midterm elections, Trump spoke repeatedly about “migrant caravans” coming from Central America and passing through Mexico on their way to the U.S. The White House stated that these caravans were filled with drug dealers and criminals — even alluding to “unknown Middle Easterners” being among the migrants at one point — and over 5,000 active-duty troops were posted at the border as a precaution. The DEA, however says most illegal drugs come through legal ports of entry.

“The reality at the border right now is that many, mostly women and children, are stuck between harsh inhumane laws and criminal threats,” said Carlos Figueroa, a professor of U.S. and Latino politics at Ithaca College, via email.

The U.S. has not been the only country that has opposed the flow of migrants. Under increasing pressure from the U.S., Mexico has also taken an increasingly hard-line stance on the matter, deporting up to 500 migrants in November alone. Threats of violence come from a variety of different sources, according to advocacy group No Más Muertos (“No More Deaths”) media team member Justine Orlovsky-Schnitzler.

“Many people we encounter have had experiences with Border Patrol, cartel violence and smugglers,” Orlovsky-Schnitzler said.

Previous means of controlling the situation have included keeping migrants in detention centers, and the Trump administration’s notorious “zero-tolerance” policy separating children from their families; the Department of Health and Human Services later admitted to losing roughly 1,500 of the kids it had placed with sponsors. Other solutions included using tear gas to deter crowds of migrants waiting at the border in November 2018, an incident depicted in a now-famous Reuters photo showing Honduran mother Maria Ceza fleeing the tear gas with her two young daughters.

In March 2018, the Trump administration announced a very different approach to the immigration crisis: to cut federal aid to El Salvador, Guatemala and Honduras, the three nations where many migrants have been leaving due to a lack of infrastructure, security and opportunity.

“It is cruel to imagine the United States ceasing what little aid is provided to countries that our government destabilized in the first place,” Orlovsky-Schnitzler said. “The United States has a long and ongoing history of political and economic intervention in Central America, which has served only to disenfranchise nations and fuel migration.”

The administration has cited a lack of effort on the part of Central American countries to stop the influx of migrants from leaving as part of its justification for diverting the $450 million in aid from the region.

Many economists and political analysts, however, insist this would only make the situation worse.

“With aid, and aid used to generate jobs and deal with poverty alleviation, fewer Central Americans would have reason to migrate,” said Susan Eckstein, a professor of international relations and sociology at Boston University. Eckstein has focused much of her research on immigration and the impact of migrants across borders.

“They migrate from necessity, not choice,” she said.

According to Eckstein, if the U.S. cuts aid to the Northern Triangle countries, the resulting deterioration of the countries will lead to more migration.

A 2018 report from charity organization UNICEF USA cited systemic violence and poverty as some of the primary reasons migrants flee the Northern Triangle and Mexico.

In particular, Figueroa said, the civil wars in El Salvador and Guatemala led to a crumbling infrastructure, such as a lack of education, high unemployment rates and a corrupt government system that favors a select few of the population.

“All this no doubt has led to pervasive narcotic trafficking, government corruption and fragile [and] weak government structures and the rule of law in these countries,” Figueroa said. “It has become an unfortunate cycle of despair for millions and profit for the few.

Figueroa added that these pressures create a need for survival, which can lead people to join gang communities. This, in turn, continues the cycle of violence and fuels social and political instability.

With over half the population in both Honduras and Guatemala being in poverty, there are few opportunities for people to find work, live in secure areas or provide for family members.

“It has become an unfortunate cycle of despair for millions and profit for the few,” Figueroa said. “President Trump must stop playing politics for once and see the broader implications to his proposals.”