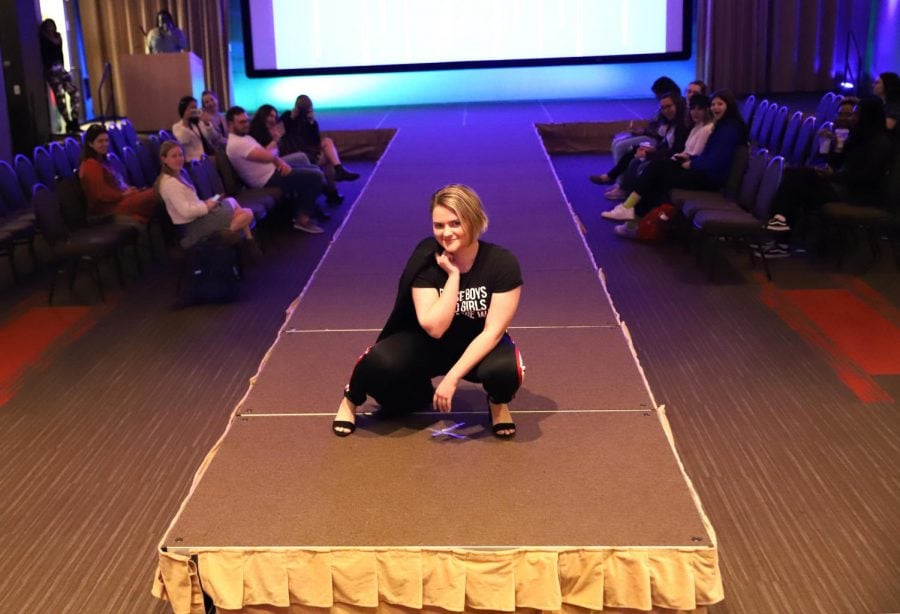 A volunteer from the crowd poses during the DePaul Fashion Show at the Student Center. The Fashion Show was organized by DePaul's Fashion Society.

Student brands and boutiques showcased their new seasonal clothes on the runway with the DePaul Fashion Show on Tuesday, April 16. The journey toward this show started during the winter involvement fair, where the DePaul Activities Board and the DePaul Fashion Society essentially met. The Fashion Society had just put itself back together and wanted to do a fashion show, but they barely started out with the process. They were able to continue with their plans for the show when the Activities Board reached out to help.

Viviana Campos, president of DePaul’s Fashion Society, explained the process of putting the show together.

“We were recruiting models and boutiques. We reached out to all of them to see who would want to be in the show,” Campos said.

In order to get more designers into the show, some Society Members reached out to student designers they knew.

“It really comes down to everyone volunteering and putting stuff together,”Campos said.

She explained that working with DAB made the process easier because the Activities Board does “big collaborations and they do big events.”

The Fashion Show chair of the Activities Board, Connor Mudd, said the board handled “the front-of-house” aspects of the show.

He explained that the Activities Board booked the room and retrieved the clothes from the boutiques. They also made contact with all of the designers that were in the show.

“We try not [to] gauge the success of an event on its attendance,” Mudd said. He also said they look for that “thriving factor.”

He described the event’s success as driven by the interaction from students. With every event they host, they want to have an environment where students can thrive. Throughout the fashion show, the crowd of students would cheer on each model.

“I enjoyed how kind everyone was to the model[s]. It was very encouraging,” said Mya Whi, a DePaul student and fashion show attendee.

Another attendee and student of DePaul, Sydnie Martin, had stated that she enjoyed the interactiveness of the show.

From beginning to end, the show kept the crowd of students entertained. During what one may consider the pre-show, there was music playing and a backdrop of purple rain on a big screen. Toward the back of the room, there was lemonade and tea with various types of cookies. Both the bookstore and the Activities Board were set up in the back. The first line of fashion that came through was new DePaul spirit wear, which you could buy at the bookstore setup in the back of the room.

The next line, Eximious, came from a student designer. As described in the event’s program, “eximious means excellence in Latin, so expect nothing less from this student designed athleisure brand.”

Eximious was the favorite of Martin because they had quarter zip jackets with simple long- and short-sleeve shirts and tank tops with the name plastered on the chest.

The last line was spirit wear for the DePaul Activities Board.

During one of the intermissions, there was a “walk-off” competition. People from the audience, who signed up before the show, would walk the runway to show off their fashion and their model walk. After each person walked the runway, there was poll on the DePaul Fashion Society’s Facebook page and the audience was able to vote for their favorite. At the end, it was revealed that there was a tie and the two girls faced off in a final walk-off.

Both the DePaul Activities Board and DePaul’s Fashion Society have stated that they would want to do a fashion show again in the near future. Campos had even mentioned Fashion Revolution, which she described as an event that helps people to be aware of their fashion.

Mudd hinted at a fashion week in the future and briefly mentioned the Fashion Revolution, which will be held on Monday, April 22 in the Lincoln Park Student Center, starting at 4 p.m.