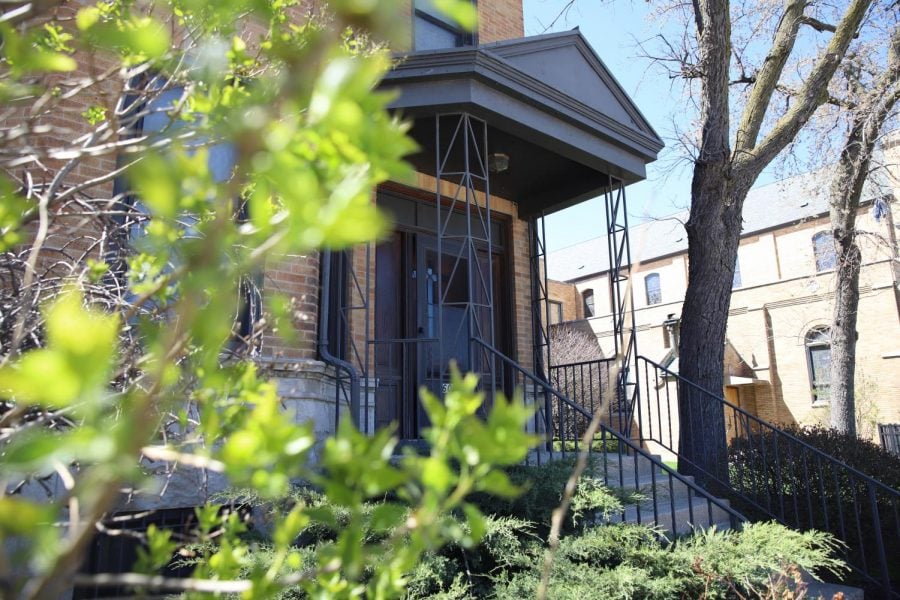 In Ukrainian Village, up to six housing-insecure DePaul students can live without the threat of homelessness.

When housing insecurity strikes, students might fear that their options are limited. Moving back home, couch surfing or sleeping on the train become realities for students who are unable to secure a lease or afford on-campus housing. For DePaul students, another option waits for them on the 12th floor of the Loop campus’ Daley building.

There, the Chicago office for Depaul USA, a national homelessness organization, resides. Just past the front door, students will find Abe Morris, the director for the Dax Program, a program by Depaul USA which provides “housing, case management, counseling referrals, transportation, food, textbook assistance and educational reimbursements for homeless or housing-insecure college students,” according to their website. The grayish room looks no different than other offices on campus. Morris’ gym bag sits next to his paper-filled desk. But Morris’ most laboring times aren’t spent at his desk — they are spent out of the Loop and into neighborhoods where he acts as the house manager for two Dax houses, properties bought by Depaul USA to give housing-insecure students a home.

In March 2019, Depaul USA closed on a four-bedroom, one-and-a-half bathroom unit near Midway which will serve as the second Dax house, with the first located in Ukrainian Village. Soon, the home will house four students who can decorate the walls with posters, fill the kitchen with quirky mugs and come and go as they please. Although students are required to pay some rent and work a minimum of 10 hours a week, Morris believes that what should come first is a secure living arrangement.

“I’m a firm believer in the housing-first model — if you can provide food, water, shelter and safety, we can then create a platform for students and they can then build from there.”

If students can’t secure a job, Morris and Depaul USA provide avenues for employment such as on-campus jobs, but the students are mostly self-motivated.

“A lot of the times students are very efficient, finding their own jobs, doing their own searches,” Morris said. “All they need is the time, space and rest to be able to apply to jobs, and usually they are able to get them.”

In 2014, Depaul USA established the Dax Program when it began assisting housing-insecure students with host families. Students could apply, meet a potential host family and receive temporary housing. The program proved successful once the word got out through their bright orange “Homelessness has no place” fliers displayed across campus and frequent events in-and-around campus, but Morris put in work to stretch it to where it is today.

Morris began his work with Depaul USA after seeing an opening for his position and reading about the organization which placed him back into a time where he was close to housing insecurity.

During his college years, Morris received an email telling him of an outstanding balance on his account. He owed a little over $1300 to the university, and this wasn’t money he could come up with easily.

“My mom is fully disabled, our house was foreclosed on and we filed for bankruptcy, and my step-dad, who I had to claim on my FAFSA, financially did not support me,” Morris said. “So, even though he didn’t financially support me, I still had to claim him, and that created shortage on my financial aid, so there was no way I could pay this $1,300.”

After he told his mother the situation, she instructed him to pray. Morris, a religious man, didn’t think that praying was going to come up with the money, but he did it anyway after exhausting his other options.

Hours later, he received a call from the financial aid office telling him his account’s delinquency was a mistake, and his account would not be on hold and he could register for classes the next semester.

Morris was close to becoming housing-insecure, and as he read his future job’s description, he saw the potential to “send the elevator back down” to marginalized students who want an opportunity to better their lives.

“My focus is to change the Dax Program from a program to a movement, a national movement to end college homelessness across the country,” Morris said.

Currently, the Dax Program is working with an undisclosed organization who is interested in funding a $3 million project for a larger house that will be able to accommodate between 18 and 26 students, with the potential for other Chicago universities to get involved. The Dax Program will host its second annual Dax Gala on June 4 in the Cortelyou Commons with the goal of raising $70,000 for the program’s operations. On the first Friday of every month, the Dax House hosts a breakfast in which students and community members can get more familiar and informed with the Program itself, its members and student homelessness.

To Morris, the future of the Dax Program and its residents gleams, as homelessness has been placed behind them.

“The Dax House does not differ from a lot of other homes around Chicago,” Morris said. “They have key to come and go, we talk to one another. A lot of conversations that happen in the Dax House don’t focus around homelessness because they’re not homeless anymore. They have a place […]  It’s your average house. We are not a shelter — we are a home.”