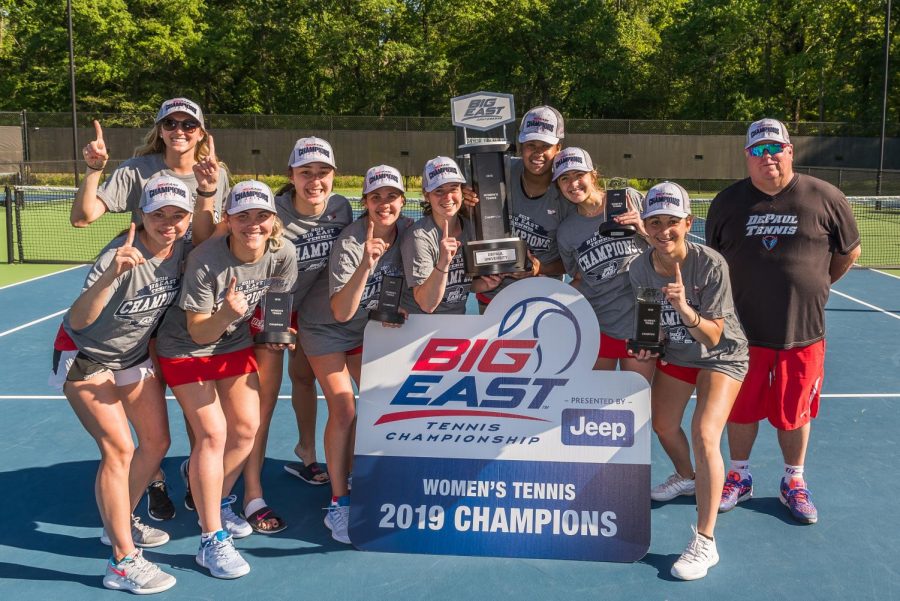 Photo courtesy of the Big East

The DePaul women's tennis team pose for a picture together after winning the Big East Tournament championship. The Blue Demons defeated Xavier 4-3 in the final on April 22 in South Carolina.

For the fourth time in the last six years, the Blue Demons reign over the rest of the Big East conference after winning the tournament title 4-3 over Xavier on Monday.

Coming into the tournament, DePaul was the second seed after a regular season that saw many of the players suffer nagging injuries. The Blue Demons, however, were able to get their player’s healthy in time for the Big East Tournament and as a result are now standing as conference tournament champions.

DePaul then faced a surprising Villanova team who upset Marquette in the round before. They were able to beat Villanova by a score of 4-2 and advance to the final against Xavier.

The Musketeers came into the match as the one seed in the conference and had a 20-match winning streak going into the final.

DePaul looked like they were well on their way to securing the title, but Xavier stormed back to win the next three matches and tie the score at three.

It all came down to the final match, where DePaul sophomore Alina Kuzmenkova faced Xavier freshman Emily Thomas in a battle to determine which team would win the tournament title.

With the win, DePaul earned an automatic berth to the NCAA Championships and will wait until next Monday to see who they will play in the first round of the competition.