After Chicago hotel workers strike, one unionized hotel is left with unresolved contract 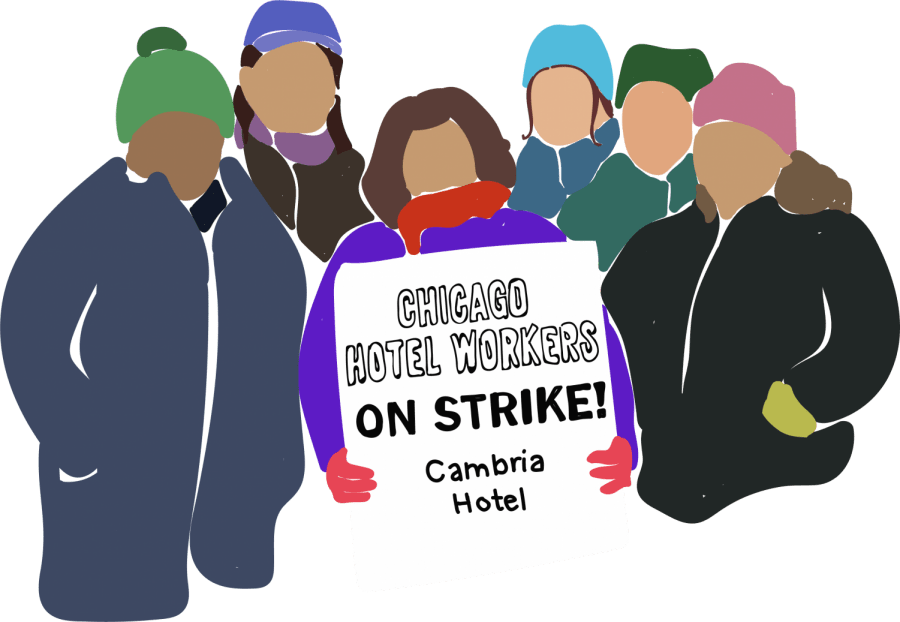 Javier De La Rosa Garcia hasn’t worked in 231 days. Meaning, he hasn’t seen a paycheck in 32 weeks. Neither have the other 33 employees of Chicago’s Cambria Hotel that have now been on strike for nearly eight months straight.

On Sept. 7, employees of the 26 hotels represented by the union, Unite Here Local 1, declared they would strike until their employers agreed to provide year-round health care. For 25 hotels, this demand was met and new contracts were ratified after three weeks.

But employees of Cambria did not join in the celebration. The union and hotel management were not able to settle a dispute over introducing a requirement of additional work for housekeepers.

The union says the hotel is asking that two rooms be added to housekeepers’ workload every shift. The hotel said its housekeepers are currently working less than their counterparts at other hotels in the city, and they are merely trying to meet those standards.

De La Rosa Garcia, 49, immigrated from Mexico City to Chicago in 1998 and has been a houseman at Cambria for 10 years. Being on strike for this long has been hard on him and his family. His wife has diabetes and they’ve had to rely on getting health care from the union to make sure she can get her medicine and make doctor visits. Despite this, he is committed to the cause and willing to continue sacrificing for it.

“The more difficult battles give you the strongest warriors,” Garcia said. “We know we’re doing the right thing; we’re on the right track. We are seeking for justice that’s all.”

Union representative Marcos Feldman notes that all of the workers on strike are immigrants and that the workload increase would largely impact the women staff.

“All of the extra profit they’re seeking to extract from these workers is coming off the backs of mostly black and brown women,” Feldman said.

Among these women is Gloria Tavira. She’s been at the hotel for the last six years. She is from Mexico and has lived in the States since 2000. Much of what she answered for this interview was spoken in Spanish and translated by Feldman. As the strike has continued to stretch on, she has had to stretch her wallet. She’s had to weigh making concessions for herself and her kids in order to be able to send money to her mother back home. They’ve been able to live off of her husband’s income, but she notes that many of her coworkers have had to find other jobs and adjust their budgets.

Like Garcia though, she is determined to keep fighting.

“The day to day is hard but we don’t care. It has rained and snowed on us and we stayed out there,” she said. “The message is to the company and our fellow workers that we will fight for a contract, for stability and respect.”

Feldman said that during negotiations, the hotel said it would save $200,000 if the work increase were to be added to the contract.

“They just want more profit off of the backs of these workers,” Feldman said.

But Feldman is insistent that the employees are already overworked. When he works the picket line, his favorite chant to incite goes, “Mama, mama can’t you see? I used to be a human being now I’m just a machine.”

“They’re working in pain. Some of them have more serious long-term injuries,” Feldman said. “The bottom line is none of them can actually do more rooms, they can barely finish the workload as it is now.”

Gloria has experienced this firsthand. She had to have surgery on her arm due to a work-related accident.

“It affects us physically and emotionally,” she said. “We just have too much pain that we deal with on a regular basis.”

Management at Cambria declined to comment on the record. In a press release, they stated that there is a daily housekeeping quota of 15 credits among most of the other hotels that Local 1 represents and that Cambria room attendants only clean 13 credits.

“The hotel proposed 15 credits to bring it in line with its competitors in the city since housekeeping workloads are a key aspect of the hotel’s operating costs,” the statement said.

“It’s just not true; there is no exact same standard,” Feldman said. “The truth is that no other hotel increased workload and we’re not going to let them do it here.”

Choice Hotels, the corporation that owns Cambria, runs a “Room to be Green” program, according to their website. It is described as an initiative where, “we promote environmentally-friendly practices throughout the hotel system and at our corporate offices.” But Feldman insists this practice does more harm than good. Guests can opt out of housekeeping their room, the idea being they would save water and mitigate chemical use. But, Feldman said, when the patrons leave the room still has to be cleaned and doing it is even more strenuous on the workers, “When you leave and it hasn’t been cleaned all week it’s nasty and requires more chemicals, more water, all the things the hotel wants people to save, you end up having to use more of.”

Feldman is also afraid if the hotel gets what they’re after, some workers may end up losing their jobs.

“Increasing workload would also reduce housekeepers’ schedules,” Feldman said. “If people do more work you need less people to do the work.”

Feldman said the union runs active boycotts, asking the public and specific groups not to do business with the hotel. On one of their leaflets, DePaul’s Director for Women in Entrepreneurship Abigail Ingram was asked to “stop attacking women” and “cancel her room block at the Cambria.” However, upon further investigation, it was uncovered that there is an Abigail Ingram with a room block at the hotel, but she is not the DePaul faculty member Abigail Ingram. Both parties declined to speak further on the situation.

Throughout the morning at the picket line, people continually came and joined in the protest. The strikers and their supporters marched in a circle, picking up intensity.

A bellman placed his luggage cart in the middle of the sidewalk, blocking part of the marchers’ route. Garcia said disturbances like this happen often, “I’d be lying if I said it’s easy to be chill all the time but you learn along the way. When it happens and your first reaction is to defend yourself but you turn around and keep walking. You become stronger every time.” Garcia said. “Every time they come at you, just give them a nice smile and say have a nice day and just keep walking.”

Thrice during a twenty minute period, taxis honk their horns in solidarity with the strikers. They reply with cheers and fist throws in the air. It’s this reassurance that helps push Garcia forward,  “When people come to the line and say they support you guys and give you applause you say ‘Wow I’m not alone.’ It keeps you going.”