EDITORIAL: During a controversial week, The DePaulia gets advice from someone who’s been there 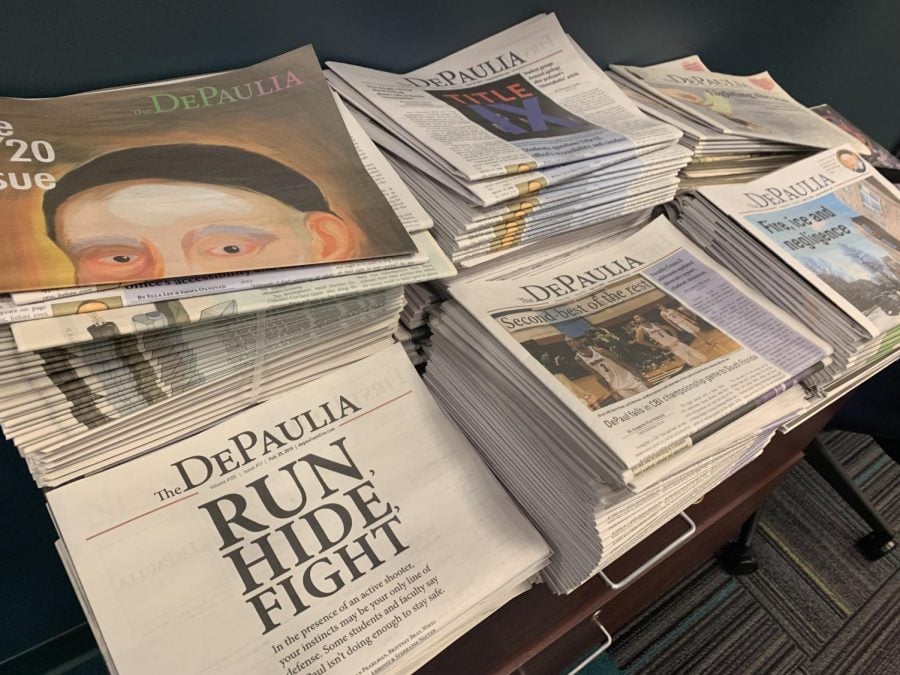 You might have heard by now about the swirl of controversy that The DePaulia found itself in last week. It was a tidal wave of ethical quandaries, the likes of which we have never dealt with before.

We found ourselves accused of exploiting victims of sexual assault. We had hundreds of our newspapers stolen off of newsstands in Lincoln Park. And we got reamed out by the Title IX office for an important story we published on the front page — a story whose facts we stand behind completely.

Luckily, we had someone visit DePaul on Thursday who deals with these ethical issues every day. Issues that, if handled incorrectly, could cause markets to tumble, innocent people to be accused and even lead to the loss of human life.

Executive editor of the New York Times Dean Baquet was honored with DePaul’s Center for Journalism Excellence and Integrity Distinguished Journalist Award. As the leader of the Times’ newsroom, Baquet and his staff of reporters cover the administration of President Donald Trump, high-stakes national security issues, global war and strife, all “without fear or favor,” as the paper’s famous motto goes.

We asked Baquet what he would do if he were in our position.

“The first thing I would do is write an editorial,” he said.

A student was upset about how we used an image of them taken at a public event. Anytime anybody is in a public place, you are subject to being photographed, even if you don’t expressly give permission, and that photograph is legally and ethically allowed to be published. In other words, by appearing in public, you forego your right to privacy.

On top of this, there were multiple photographers at this event, announcements were made that you were subject to photography if you’re in the area and signs were posted. Everyone there knew.

But word spread around Twitter and the comments section of The DePaulia’s website, saying that we were exploiting people for our own glory, that we were insensitive and should be ashamed of ourselves.

This was neither our intention nor what we did. When we cover sensitive subjects like sexual assault, which we covered extensively in last week’s issue and in the past, we know the level of sensitivity that is required.

“If I had gotten that call, I would be empathetic, but firm,” Baquet said. “I would say, ‘I get it, I get that it’s painful. But you were in a public forum, and there’s no way we could have not covered it.’”

This is exactly the way we approached the situation. We understand the position that this student was put in, but cannot apologize for doing something that is in our job description.

Our situation was analogous to one the Times had to deal with a couple weeks ago. In a story about Sen. Bernie Sanders’ criticism of Neera Tanden, a former top aide to Hillary Clinton and the head of the Center for American Progress, a moderate liberal think-tank, the pair of reporters interviewed Tanden’s mother.

She gave unflattering quotes about her daughter, like saying that she can be “aggressive” and that she “shows up at rich people’s places because she needs funds from them.” After the article was published, Tanden’s mother put out a statement saying she didn’t know her quotes would be used in a story.

The reporters, both veteran journalists, did everything right. They identified themselves as reporters for the New York Times, at which point Tanden’s mom sounded off, letting all of her opinions fly.

It worries us how poorly students, and the general public, understand what we and other journalists are tasked with doing. We write the truth and, as the truism goes, the truth hurts.

We were also called “fake news” for very basic coverage of a professor’s controversial article published in The Federalist, which called for the annexation of the West Bank — a label The DePaulia can now proudly share with the Times.

The article was fair and balanced. It lays out both sides of the argument. We know that in today’s hyperpartisan atmosphere, giving both sides of a story can in and of itself be considered biased. But our duty as journalists is not to determine which argument is valid and which is not — it is to give you the facts and let you decide for yourself.

And whoever this student was who called the story “fake news” was probably just upset that we didn’t frame the story the way they saw it.

We do write nice and fluffy stories when they come along. But we’ll never give you something you want to hear.

“[The New York Times] gets attacked a lot from the left,” Baquet said. “We’re in a really tricky political climate where people don’t want to hear the other side.”

The issues that our editorial staff have faced this week have only emboldened us to continue reporting on these important issues. If dialogue and debate is generated by the content of the articles we publish, we can safely say that we have done our jobs.

As the old journalism cliche goes, if you’re not making someone mad, you’re not doing your job.