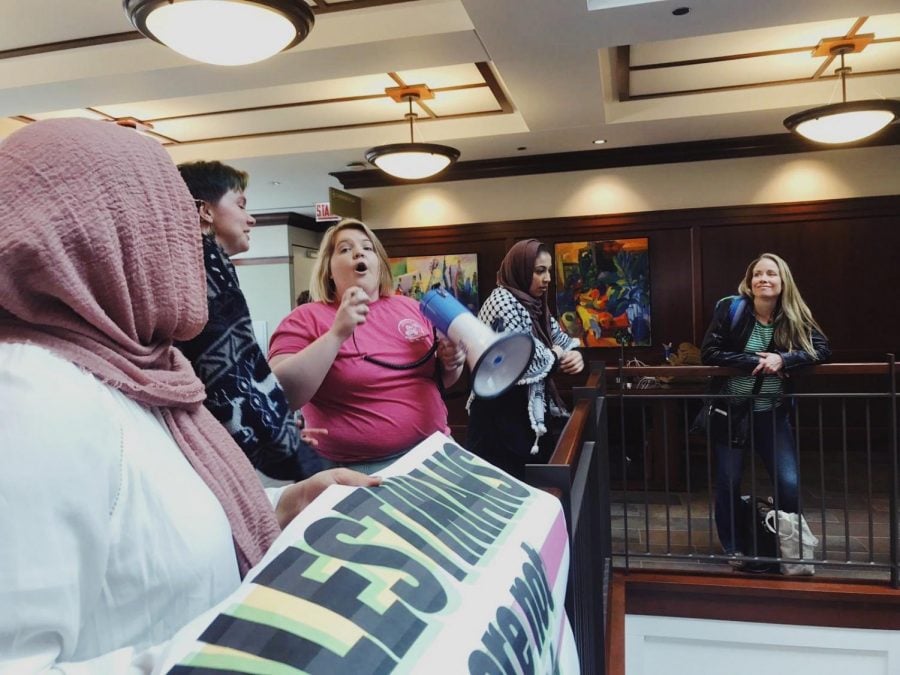 Correction: A previous version of the article misspelled Hadiya Afzal’s first name. It is spelled Hadiya, not Hadyia. The DePaulia acknowledges and apologizes for the error.

Aggrieved students were vocal this week about their desire for DePaul to censure Professor Jason Hill over an article he wrote last week in The Federalist, a right-wing online news magazine, in which he wrote that Israel has “the moral right” to annex the West Bank and strip Arabs living in Israel of their right to vote.

Students organized a protest in Arts & Letters in the early afternoon of Wednesday, April 24 to express their frustration with the inaction on the part of the DePaul administration.

A coalition of student groups last week put out a statement that called on DePaul to censure Hill for the “Islamophobic” and “racist” views espoused in the article.

“We call on the administration to stand against hate, to stand against racism,” the protestors chanted as they dropped fliers from the upper floors of the building’s atrium and draped signs over the banisters saying “DePaul Must Dump Hill.”

Within 30 minutes of the culmination of the protest, President A. Gabriel Esteban emailed a letter to the DePaul community outlining his position on the controversy surrounding Hill.

“DePaul […] holds academic freedom in the highest regard,” Esteban wrote. “When professors speak or write on topics that prompt strongly-held, divergent perspectives, the question of academic freedom often arises.

“Should faculty be allowed to express a provocative position?” Esteban continued. “The short answer is yes. Yet, DePaul aspires to be a community marked by mutual respect, always aware of the potential impact of our words and actions. Both of these outcomes are achievable.”

Esteban’s letter did little to satisfy the dozens of upset students who felt offended and even personally attacked by Hill’s language. Some students like Hadiya Afzal, a member of the DePaul Democrats, said Esteban’s statement just goes to show that DePaul still isn’t good at listening to the demands and desires of the student body.

“We weren’t calling for DePaul to fire him, we just wanted them to say that this was unacceptable,” Afzal said. “The administration hasn’t really learned how to take students seriously when it comes to these debates, which is disappointing.”

While Esteban did say that Hill’s views are not reflective of the views of DePaul as a whole, he declined to censure him for making statements that he characterized as “unpopular.”

“I don’t feel safe as a Muslim student knowing that someone like this is on our campus,” Afzal said. “It’s ridiculous that my tuition is going to the salary of an Islamophobe, of a transphobe, of a very sexist man.”

Controversy surrounding free speech debates at DePaul have been thrust to the forefront of the community’s consciousness in the years since Milo Yiannopoulos was invited to speak on campus by the College Republicans, and he was interrupted by demonstrators who disagreed with him being allowed to speak on campus.

In that instance, then-university president Fr. Dennis H. Holtschneider took a stance similar to Esteban’s. He said that Yiannopoulos should have been allowed to speak and he was “ashamed” when he saw a protestor steal a microphone out of his hand.

“[Yiannopoulos] was invited to speak at DePaul, and those who interrupted the speech were wrong to do so,” Holtschneider wrote at the time. “Universities welcome speakers, give their ideas a respectful hearing, and then respond with additional speech countering the ideas.”

Student groups circulated a Google doc with dozens of screenshots from Hill’s Twitter account in which he expresses support for Islamophobic conspiracy theorist Laura Loomer, who was banned from Twitter in November for a tweet about Rep. Ilhan Omar and Muslims that violated Twitter’s hate speech policy.

“It’s a pattern of discrimination,” Afzal said. “We worry that these patterns will manifest themselves in very unfortunate ways if it’s not corrected by DePaul.”