OPINION: How the debate over climate change was rigged from the start 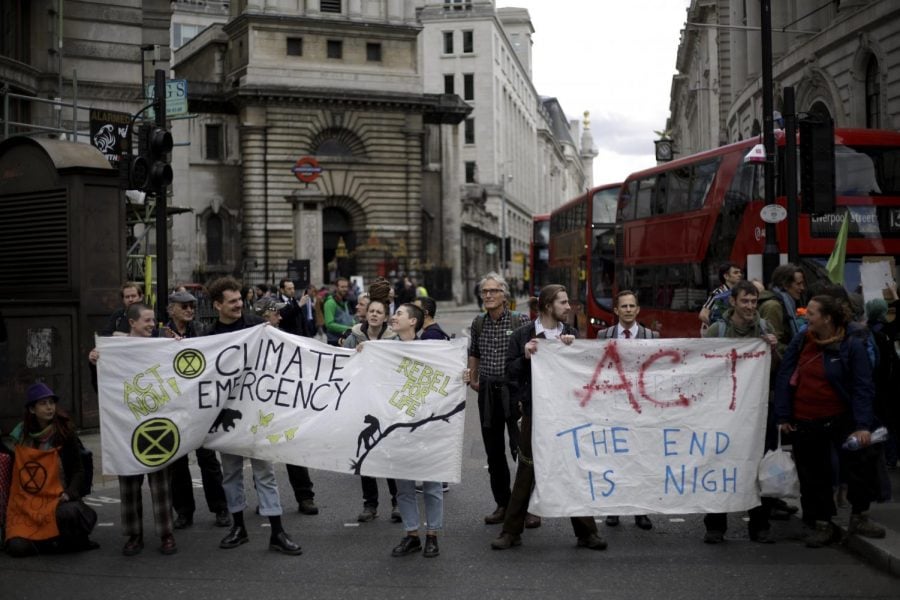 Climate protesters in London outside of the Bank of England on April 25. Organized by the group Extinction Rebellion, the protestors disrupted the city for 10 days.

Climate change today is a highly political issue, but it wasn’t always that way — and it shouldn’t be. Throughout the years, big energy industries have been key players in constructing the platform of climate change denial, and as their platform grew, journalists felt more compelled to give deniers a voice in stories centered on climate change, further contributing to public misunderstanding.

In an investigative piece by InsideClimate News, reporters looked at notes from a 1978 Exxon Mobil committee meeting where James F. Black, then senior company scientist, presented the dangers of releasing carbon dioxide into the atmosphere by Exxon’s use of fossil fuels. At the time, climate change and potential efforts to reduce impacts weren’t political or debatable at all.

Exxon acted promptly in 1979 on this information by initiating a large scale research effort that looked at the impacts of carbon dioxide emissions from fossil fuels.

For a while, it looked like Exxon might have been the cutting edge leader in climate change research and based on their own findings, may have changed the trajectory for what the future of their corporation would be. That is not what happened.

Instead, when climate change started to enter the public conversation in 1988, Exxon denied their earlier research findings, and wasn’t transparent with their shareholders.

Jill Hopke, assistant professor in the journalism department whose work focuses on environmental communication, said there’s a reason that 1988 was a turning point in bringing climate change into mainstream news coverage and public dialogue.

“That was when NASA scientist, James Hansen, had actually addressed a congressional committee, and he did so in the midst of a heat wave…and a lot of what we think about climate is influenced by the weather that we experience,” she said.

Exxon began funding different groups to sow doubt about climate change science as it became a more recognizable issue, and consequently, the emerging deniers took to the media to voice their “doubt,” creating an issue of false balance that continues to this day.

The concept of “false balance” relates to the journalistic norms and standards of remaining objective, and always presenting both sides of the story. This has historically created a struggle for journalists covering climate change related stories, since they often feel the need to apply balance and include the voice of a small group of scientists who dispute the majority 97 percent scientific consensus that climate change is human caused and will continue to have worsening impacts.

“Then, there’s sort of this phase where it’s covered by science reporters, but once the industry funded and industry backed doubt campaigns come into play, there’s a turn by journalists and they start consulting sources that are industry backed and are clearly trying to poke holes in the growing scientific consensus about anthropogenic climate change,” said Robert Eshelman, an environmental reporter and adjunct professor at Columbia University’s Graduate School of Journalism.

While the issue of false balance has recently gotten better in terms of media outlets addressing the 97 percent majority consensus and not giving undue time to deniers, Eshelman said the greater challenges now are the established media outlets who still spread misinformation.

“It’s (now) an issue of you’ve got ideologically driven publications and television networks that continue to promote denial of climate change…and elected officials that deny climate change,” he said.

Elected officials, and even the small group of scientists who actively work to create doubt about the scientific consensus are almost always funded by the fossil fuel industry. Oklahoma Sen. James M. Inhofe for example, who infamously brought a snowball to the Senate floor as “evidence” that climate change is a hoax, received nearly four hundred thousand dollars from oil and gas companies in campaign contributions.

If journalists still feel pressured to include the voice of climate deniers, they can do so in a way that highlights the 97 percent scientific consensus, and provide more information on where deniers receive funding from in order to give audiences a better understanding of denier motives.

Kaitlyn Pike, sustainability coordinator for DePaul’s Student Government Association said as the scientific evidence continues to grow, there’s no longer a reason to provide a voice to deniers in news coverage at all since it creates an unjustified sense of comfort with inaction.

“This false sense of uncertainty in whether humans have a role in climate change, and whether climate change is ‘even happening,’ can lead to national and global complacency, and an incentive to take no action in regards to environmental issues,” she said in an email.

Hopke highlighted that another important thing for media reporters to consider is how much an extreme weather event may have been intensified or made more frequent due to climate change’s effects.

“It is actually possible in many cases, for climate scientists to model to what degree was a particular extreme weather event influenced by climate change,” she said.

Eshelman also echoed the importance of connecting the intensity of storms to climate change.

“TV meteorologists have a tremendous role to play in connecting extreme weather to climate change…local meteorologists really stepping out and trying to do segments that inform the readers about how the frequency of more intense, more extreme weather events is a result of changing climate which is caused by human actions,” he said.

When it comes to the potential for catastrophe, we’re on the clock with climate change. Our perception of this issue has been shaped by the voices we hear, and those voices get selected for us. We need to break down this largely manufactured political disagreement — especially if we’re going to act before the clock runs out.