Republican primary contender Bill Weld: Who is he? 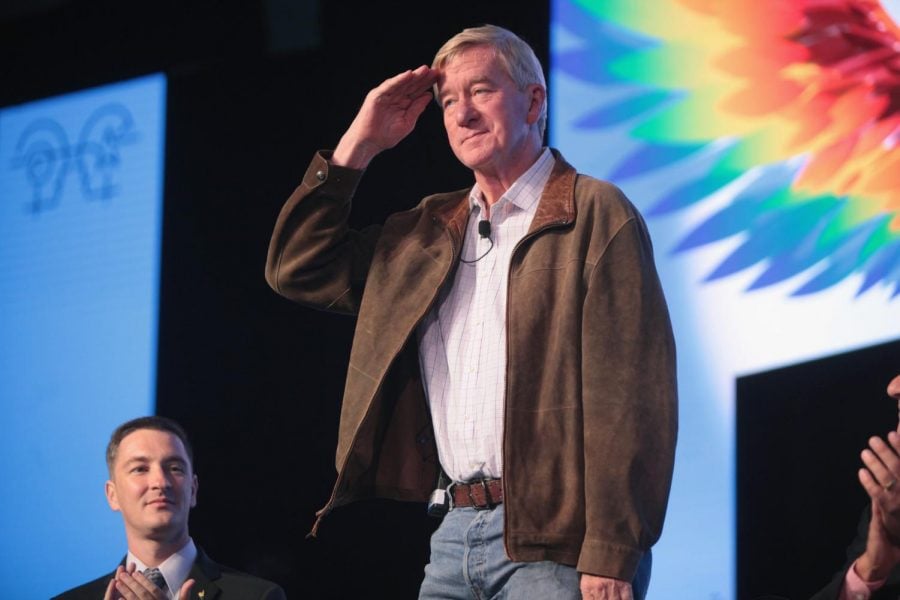 When former two-term Massachusetts Gov. William Weld announced in February that he was forming a presidential exploratory committee, it seemed to indicate that the 73-year-old self-described libertarian would be the first to challenge incumbent President Donald Trump in the 2020 Republican primary.   With his official campaign announcement April 15, Weld is raising questions about the state of the Republican Party and his own chances of success.

Weld was the governor of Massachusetts from 1991 to 1997, and in the 2016 presidential election he ran alongside Libertarian candidate Gary Johnson as Vice President.

Today he’s positioned as a classic fiscal conservative with some progressive-leaning positions, with politics website OnTheIssues.org identifying him as a “progressive leaning Libertarian.”

Weld has been critical of Trump’s fiscal policies, his decorum and behavior as a president, and issues on immigration and climate change.

Weld’s campaign did not respond to an interview request from The DePaulia.

“I’ve never met a tax cut I didn’t like. I cut taxes 21 times. I think probably the first taxes I would go on to cut would be to further lower the capital gains tax, because I think that’s very good for the economy,” Weld said in an interview with Boston public radio station WBUR. “It influences investment decisions and when people decide to invest that has a spillover effect on the employment rate.”

As for Trump, Weld told CNN’s Alisyn Camerota: “I’m not sure how serious Mr. Trump is about governing, honestly. He has a one-word environmental policy: ‘hoax.’ A one-word immigration policy: ‘wall.’ I think sometimes his lack of experience in preparation for the office shows.”

Weld’s most immediate challenge is the massive support Trump enjoys from Republicans;  according to an April 12 Gallup poll, 89 percent of Republicans approve of the job the president is doing.

“[Trump] has been an unstoppable economic force. Replacing him would be foolish,” said Alex Romano, a Republican who voted for Trump in the 2016 presidential election. “He’s come through big on his economic promises, [and he] needs another four years to finish up the job on national security and health care.

R. Craig Sautter, a DePaul professor in the School of New Learning who has produced political radio and television campaign ads alongside his brother for 28 years, said Weld’s battle with Trump is an ideological one.

“What happens whenever a president is elected [is] it becomes their political party. The re-election platform is written by the White House.” Sautter said. “Insofar [as] Weld represents the traditional Republican Party, Trump has no problem putting that in.

“Trump will barely even acknowledge him.”

Weld might also have trouble reaching Democratic voters. America Victoria Koffsky, vice president of the Democratic National Committee-backed group College Democrats of America, said she will not support a Republican no matter their platform.

Weld has made criticism of Trump a key tenet of his campaign strategy. In a video announcing his candidacy, a male voiceover implores the viewer that, “Today we need Bill Weld now more than ever… because America needs better.” The video then shows a montage of controversial Trump remarks, from his assertion there “were very fine people on both sides” after the 2017 “Unite the Right” rally in Charlottesville to his minimization of the late Sen. John McCain’s military service with the comment, “I like people who weren’t captured.”

“The president, of course, is famous for being mean-spirited, and disruptive, and divisive, and wanting anything but civility,” Weld told WBUR. “He calculates that it suits his political instincts to have everybody’s teeth on edge, everybody looking around to see who’s the newest group that they can hate and fear, and it is just not the politics I was brought up with and I don’t think it’s good for the United States.”

Sautter, the DePaul professor, argued that both Weld and Democratic candidates should prioritize matters other than Trump’s civility or lack thereof.

“I think people have taken their position on Trump,” he said. They like him, hate him, or tolerate him. That issue is closest to who is Trump. He’s a loudmouth guy but you might like what he says.”

Weld maintains that despite the obstacles he faces, he’s not running on principle alone and does believe he can beat Trump.

“I’ve done it before, particularly in New Hampshire where I’m spending a lot of time,” Weld told CNN’s Jake Tapper. “It’s one vote a time and one voter at a time.”