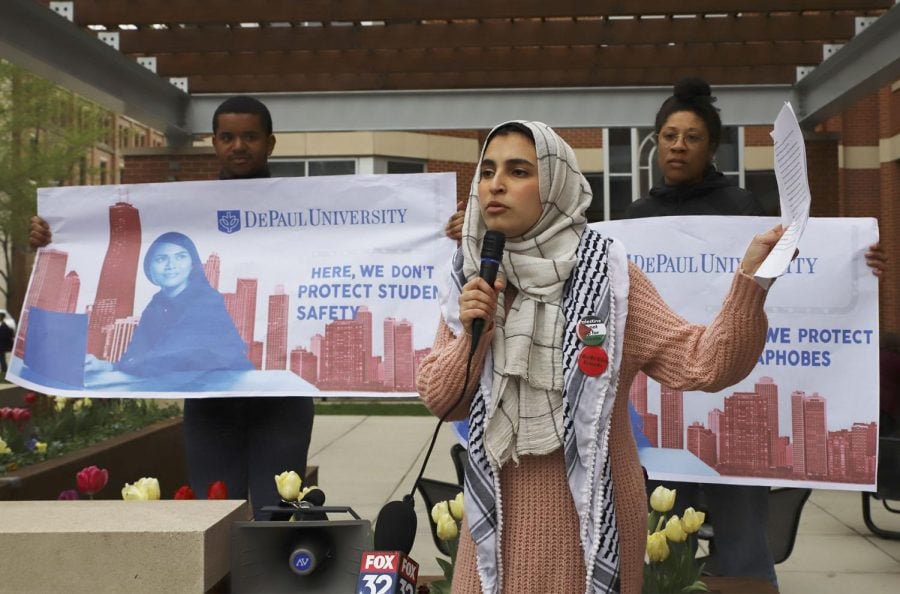 A coalition of student groups hosted an anti-hate rally on the patio of Arts & Letters Hall on Thursday, May 2, 2019 in response to an article written by philosophy professor Jason Hill in which he wrote that Israel has the “moral right” to annex the West Bank.

A week after the controversial article DePaul professor Jason Hill published in The Federalist received a strong response from students, Faculty Council voted to condemn the content of the article at its May 1 meeting. The vote for the resolution was 21-10-0.

At the heated meeting, Faculty Council did not vote to condemn Hill himself, only his article’s content, as Council President Scott Paeth clarified.

“This is not a judgment on Jason Hill as a human being; it is, however, a judgment that his writing had a particular kind of content to it, which the majority of members of Faculty Council found to be morally objectionable,” Paeth told The DePaulia.

Paeth said that although the council condemns the content of his article, it is not calling for sanctions; rather, it makes the point of affirming Hill’s academic freedom to write what he wrote.

“I would actually say that this is a resolution that is primarily about the affirmation of Jason Hill’s academic freedom, while at the same time affirming the Faculty Council’s position that the tone and content of his article were worthy of condemnation,” Paeth said.

Representatives expressed concern that the university should create specific processes that will help decide when free speech crosses boundaries.

But representatives also argued that extramural speech from faculty is essential to a thriving academic environment. Some members pointed out that there is an obligation to display a variety of speech to students when free speech itself is under assault.

“When we don’t agree with something, we begin to shut them down,” said Cathy Elias, a music professor. “What happened to dialogue in the sense of talking about things? There is no debate anymore. We’re just showing students what to do, to shut things down.”

Laura Owen, a business professor, said she found the piece repugnant, but disagreed with the resolution to condemn its content.

“He has the right to his opinion, even if it is not well-argued,” Owen said.

“Their freedom to walk the campus is in danger,” the representative said. He wanted to invite Palestinian students to the discussion but was unable to.

“One of the things that’s important for us to do is to model discourse for our students,” Faculty Council Secretary Kelly Kessler said. She added to her point a mention of the current age of much content being posted online.

“With free speech comes responsibility,” said philosophy professor Peg Birmingham. “We have a responsibility as a faculty to respond to Hill’s argument. I know it can be chilling.”

Acting Provost Salma Ghanem announced that there would be a forum on Tuesday, May 7 to discuss the concerns Hill’s article provoked.

“[The forum will be] one of a series of these types of discussions,” Ghanem said. “We need to be able to have these difficult discussions.”

In addition, professor of political science Valerie Johnson presented a report on Diversity, Equity, and Inclusion.

“Differences matter based on parts of the community we’re talking about,” Johnson said in the report.

Johnson said the ethnicity-related problems do not affect the majority of the population.

The majority of the population is ambivalent at best about the issues. The issues can make white people feel both guilty and uncomfortable, she said.

Addressing the issues “goes against the grain,” Johnson said.

“We are socialized to believe we live in a society that is fair,” Johnson said. “We all want to believe that with all our hearts and souls. We are still working on democracy, equality, fairness and justice for all.”

Johnson said the DePaul community is not immune to problems associated with a racialized society, so there is no reason to act as if it is.

Diversity, Equity, and Inclusion at DePaul are symbolic in that efforts are only event-oriented and speaker-oriented and don’t impact the entire community. They also don’t address substantive and systemic issues, Johnson said.

In addition, Johnson described Diversity, Equity, and Inclusion efforts as defensive and vilifying of critics. She described efforts as silencing and delegitimizing, provoking tension, which she said is what lands the university in publications such as the Chronicle of Higher Education.

“It is well-meaning, but it’s just not easy to do, to confront the status quo,” she said.

The leadership of the diversity efforts often includes those who are not versed  in Diversity, Equity, and Inclusion, Johnson said, and whose views are to “keep the peace rather than confront the problem.”

Johnson said she wants to see more support from the diversity efforts, and accountability and change from those behind the efforts.

“I would like to see love and concern to address the problems affecting diverse groups,” she said.

The full text of the resolution is also available here: