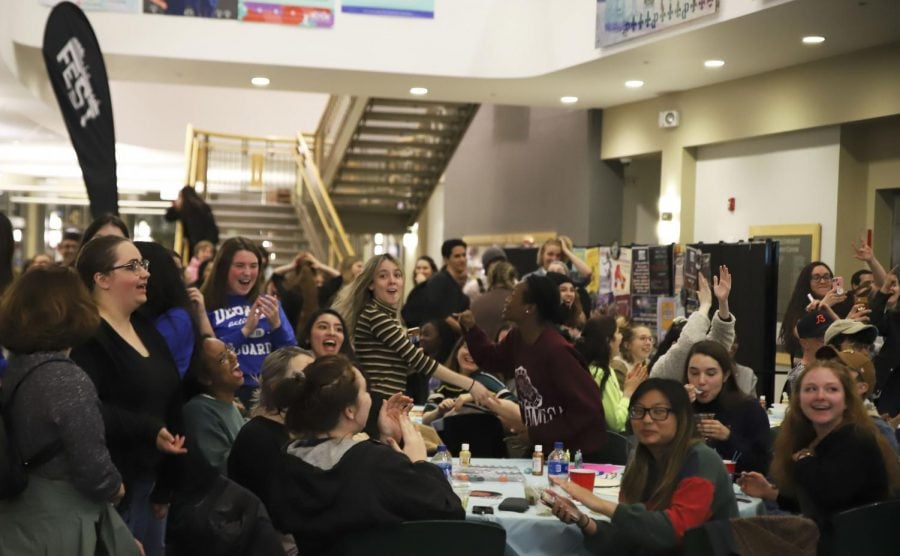 Students celebrate the announcement of Lil Yatchy as the headliner for DePaul Fest. This Fest reveal party was held in the Student Center and Fest 2019 will take place May 24.

This year’s annual FEST will take place on May 24 in the Quad with throwback artist 3OH!3 as the opener and rapper Lil Yachty as the headliner. Students gathered in lines for ice cream and giveaway contests at the Student Center on May 2 as they awaited the announcement of this year’s FEST concert performers, and expressed mixed feelings after the reveal.

FEST is DePaul’s end-of-the year concert event that brings in two artists to perform at an affordable price for students. Artists from the past few FEST events include Jesse McCartney, Logic, ASAP Ferg and BJ The Chicago Kid.

As they eagerly awaited the artist reveal announcement, students danced to “Fergalicious” and registered for a chance to win Ariana Grande tickets by answering questions on how to stay safe at FEST this year.

When 3OH!3 and Lil Yachty were revealed as this year’s performers, many students in the crowd cheered in excitement at the news.

“I’ll be there,” said, Molly Katz, a DePaul freshman.

Kiana Gilzow, DePaul junior who has attended FEST before, said she appreciates the throwback artists that the event has recently brought in.

“FEST is a great price for a concert and is a fun event to attend with friends…I liked seeing kind of a throwback artist like Jesse McCartney,” she said.

Others didn’t reciprocate this level of enthusiasm and said it reinforces their decision not to attend.

A DePaul junior, who would like to remain anonymous for fear of potential repercussions impacting her employment, hasn’t been to FEST during her time at DePaul because she hasn’t been happy with the recent performer choices.

“I’ve not been to FEST because I don’t like this new mumble rapper phase we seem to be in,” she said. “It feels like they’re trying to appeal to people, but not actually listening. Mumble rap isn’t what I want.”

She also noted the lack of female performers in recent years.

“…the lack of female artists is not lost on me,” she said.

Alayna Meyers, a DePaul freshman, said she’ll be there since many of her friends plan on going, but is indifferent to the artists.

A student poll with a list of potential FEST performers is conducted every year to try and gauge which genres and artists students would be most interested in. This year’s poll was shared on social media back in September, and included a long list of artists from a variety of genres including The 1975, Kesha, Louis the Child and Harry Styles as potential choices in the headliner category.

If DePaul had an unlimited budget to hire any artists, Katz said, “I’d like to see Rihanna.”

Rigo Gutierrez, program coordinator for campus activities and the adviser for the DePaul Activities Board (DAB) said while considering student interest in artist selection is important, the budget is another vital factor.

“We start planning as early as October or November by starting with prices and who’s available,” he said.

DePaul used to offer FEST tickets to one guest per student and stopped in recent years. This is the first year they’re reintroducing guest tickets as an option for purchase.

“This year we are reinstating it just because we think it adds a lot to the experience…students who have somebody who doesn’t go to DePaul that they might want to bring as a guest, that might make a change in their decision to not come,” Gutierrez said.

Doors will open at 4 p.m. and the show will start at 7 p.m. In the event of inclement weather, the show will still go on at McGrath arena. The early bird $5 special for tickets ended before the artist reveal event. Tickets are now $10 for both students and guests, and an after-hours gathering will follow at the Lincoln Park Student Center.