OPINION: DePaul finally gets it right on free expression 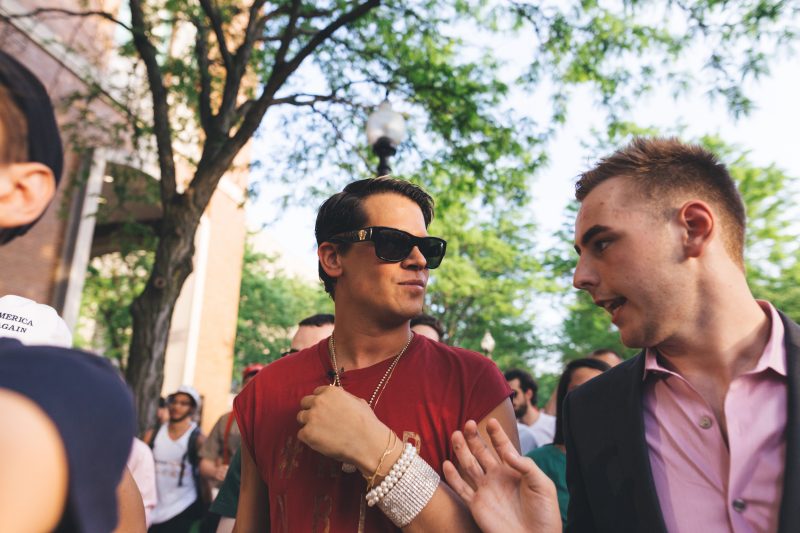 Milo Yiannopoulos (left) and John Minster (right), then the president of DePaul College Republicans, exit the Student Center following the disruption of the 2016 Yiannopoulos event.

A few weeks ago, DePaul professor Jason Hill published an article in The Federalist titled “The Moral Case for Israel Annexing the West Bank—And Beyond” arguing that the state of Israel should extend its sovereignty to the entirety of Judea and Samaria. In wake of the article’s publishing, various student groups led by Students for Justice in Palestine have called for Hill to be censured by the university, committed to racial sensitivity training and forced to apologize for his views.

A petition was started to bring these claims to bear, which as of this writing has garnered 3,450 signatures. DePaul’s Faculty Council also bizarrely voted to condemn the content of the article while at the same time affirm Hill’s academic freedom. The DePaulia itself endorsed that idea.

It is no secret DePaul has been plagued with a myriad of free speech issues the last few years. The 2016 Milo Yiannopoulos event, which I hosted, uncorked a Pandora’s box of issues, most of which I have had some involvement with. The ban on Gavin McInnes, the ban (and subsequent appearance of) Ben Shapiro, the rejection of “Unborn Lives Matter” posters, the protests at Charles Murray’s appearance last year, the proverbial “Chalkenings” over the years and more have all made the docket of DePaul’s well known free speech problems.

In wake of the Yiannopoulos event and in conjunction with its successors, DePaul has also undergone an overhaul of administrative speech policy; new Guiding Principles on Speech and Expression were introduced, while a separate committee I was a part of wrote a formal policy for student groups looking to host guest speakers. Protest guidelines have also been issued and, most prominently, a new president has been introduced. But the new approach has led to a positive result in the Hill situation.

Hill’s article inspired particular wrath as his annexation call included Area A, which is governed and largely policed by the Palestinian Authority. These areas, along with much of the West Bank, have generally been considered the foundation for the much-ballyhooed Palestinian State as part of the elusive two state solution.

The crux of the issue — and with free speech generally — is whether one believes Hill’s argument qualifies as legitimate; in other words, whether the content of the article is justifiable in any way whatsoever. Indeed, the rigor of free expression, which is the backbone of a university, requires that we look for any semblance of fair argumentation.

In this case, the answer is clearly yes. Israeli Prime Minister Benjamin Netanyahu himself has suggested annexation, while a variety of other parties in Israel beyond the governing Likud have also made the same case for many years. And given the fact that Israel is currently in the throes of rocket fire from Hamas, the Palestinian terrorist group which controls the Gaza strip (and whom Palestinians elected to power in 2005 after Israel’s withdrawal), of course there might be some people who subscribe to Hill’s point of view.

Short of a direct call for violence on grounds of racism, sexism or other discriminatory “isms,” Hill and any other person, left or right, must be heard and hopefully challenged. This is the lifeblood of a university and a free society.

This is the exact cycle we at DePaul have been dealing with for years. A student, guest speaker or professor will say something controversial, some students will call for the university’s condemnation and rejection of that person, DePaul will occasionally offer it, and on to the next outrage we go. But the Hill saga has been characterized by one key difference: DePaul’s response to calls for censure has been exemplary.

In an email to the school, Esteban wrote in part that “The university will not censure Professor Hill for making unpopular statements. Our professors and students share academic freedom, guaranteed to them by their membership in the university community. They also share freedom of speech, guaranteed to them by the Bill of Rights. DePaul will ensure that all faculty and students are empowered to exercise these rights, and DePaul will provide an appropriate environment where ideas can be exchanged freely in an atmosphere of safety for all.”

The difference between this response and DePaul’s past shoddiness is stark. Given the history I have outlined, the Hill situation stands out as perhaps the first time the university has flatly said “no” to those calling for a repression of speech. There was no equivocation, no repudiation and no abrogation. The adults have finally entered the room.

Free speech has historically been an issue which both right and left have failed to uphold because its very nature leaves both sides unhappy. Perceived repugnant opinions always remain. Yet this is how things are supposed to be. It is something we as students have too long been prevented from dealing with and Esteban should be applauded for finally righting the ship.

This is a new position for DePaul to take, so let’s hope they stick to it. A vocal minority may not be happy with this, but all of us will be better for it.