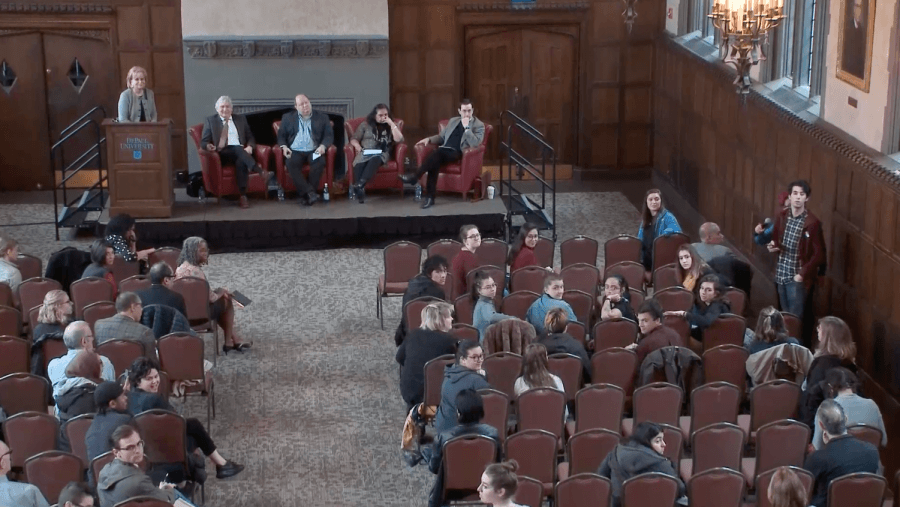 Students, staff and administrative representatives alike expressed frustration and a lack of knowing how to move forward as they discussed freedom of expression at a forum held Tuesday, May 7. The forum led to no lasting solution or compromise.

“I think, initially, I didn’t know how much this [forum] would accomplish, and afterward, it kind of feels the same way—kind of wishy-washy,” said Emma Pieroni, DePaul sophomore. “At least the dialogue is open.”

The event was organized by Acting Provost Salma Ghanem in response to an article by Jason Hill, a DePaul philosophy professor, which sparked controversy and protest on campus.

In the article, Hill argues that Israel has the “moral right” to annex the West Bank, and that they should have done so previously, after the Six Day War in 1967. In doing this, Palestinians living there would lose their right to vote.

Hill declined to attend the forum and could not be reached for comment for this article. He told The Washington Times that he chose not to attend because he was “not going to put [himself] into a situation where [he’s] going to be harassed.”

President A. Gabriel Esteban attended the first half of the forum but left before the floor was opened to questions. Marin said she was told he had left for a meeting.

To begin the forum, each professor gave a brief statement on their personal views regarding the article. Their views were widely the same.

Paeth spoke first, condemning the content as “anti-moral” and claiming that the article was written with “no knowledge of the legal or moral dimensions of thinking about what constitutes a just war.” He maintained, though, that the article falls under academic freedom and for that Hill could not be personally condemned.

Sharma’s introduction followed, where she argued that Hill’s proposal would lead to a humanitarian crisis and agreed with Paeth, saying that “what we’re being asked to consider [in the article] is immoral.” Tying in her personal background, she said the British argued India was not a nation until they gained freedom in 1947, and Hill’s argument echoed many of the arguments the British presented throughout hundreds of years of colonization.

Martin spoke primarily on the First Amendment, and aimed to answer the question, “How is this not punishable?” in regard to Hill’s comments. He explained that in the U.S., there is a hard line between speech and action; if a type of speech does not cross over into physical action and shows no sign of doing so, it must be protected by the First Amendment. This is why the U.S. struggles with creating substantive laws pertaining to hate speech. He said that the most effective way to curb this type of speech while still respecting the First Amendment is to “answer bad speech with more speech.”

Hibbard spoke last, agreeing with the comments of those who spoke before him and adding that he had been rethinking his personal understanding of academic freedom in light of this controversy. He said that Hill’s piece was not a scholarly piece of research — rather, an opinion piece — and that because it was not grounded in facts, he felt the article was not protected by academic freedom. He added that the article’s content, which “demonized a population” and called for “radical containment or expulsion,” was “enormously problematic and un-Vincentian.”

Then the floor was opened to questions.

One student with DePaul Socialists explained his grievances with Hill’s article and asked why after 3500 signatures, a campus protest and three weeks of action, the university had not done anything. He added to his question, directly addressing Esteban — but then directed it to Ghanem once he realized that Esteban had left — and asking whether the university believed the article called for an “ethnic cleansing,” and if so, whether the university upheld those statements.

Ghanem said in response that as a person of Middle Eastern descent, she felt similarly about the article’s content, but she could not condemn Hill for exercising what she and the university perceive to be his academic freedom.

“I read the article, and [it] absolutely disgusted me,” she said. “Did he call for actual ethnic cleansing? That’s debatable. […] It borderlines. The point here is that he did not say this within his classroom. He said this in a public forum outside of the university. I totally disagree with what he said, but I do uphold — for all the faculty and all the students at DePaul — the importance of academic freedom.”

Many students intended their questions to be directed toward Esteban, and they expressed frustration that he left before they had the chance to address him, given that only he can address the demands: to censure Hill for his comments, provide him with racial sensitivity training and request a public apology from him.

When Ghanem reiterated the university’s position later in the forum, the majority of students in attendance rushed to the front, handed her signs of protest, which read “Selective protection of academic freedom is not acceptable,” and showed images of the Christchurch mosque and Poway synagogue, followed by the statement “Results of hate speech.”

They marched out, chanting “What do we want? Censure. When do we want it? Now.” One student stayed behind to set up a time to meet and reconsider their demands.

“At the forum, we made it clear that this is not about Middle East politics nor academic freedom,” said Rifqa Falaneh, a member of Students for Justice in Palestine. “This is about the call for ethnic cleansing and hate speech of a professor that has created an extremely unsafe environment at DePaul University for all students. The coalition decided to march out because we were in direct disagreement for the whole forum and had made this clear in the question and answer portion of the event.”

She added that because of Esteban’s absence, she felt their questions were “insufficiently answered.”

“I really would like to know why he didn’t come,” said sophomore Madeleine Easton. “If he is so interested in going on Fox News and speaking to Tucker Carlson and complaining about the university and the students, I don’t know why he would refuse to show up to an event that allows students to voice their opinions and him to voice his opinion. This was a moment for him to really say his piece, and he neglected to do that, which I really think is a shame.”

Despite students’ aggravation, Ghanem said she felt the meeting was productive nonetheless, and that while the conflict is nuanced, she hopes to continue the conversation with both public forums and interpersonal meetings.

“I didn’t think we were going to get to the answers [by the end of this meeting], but I think it’s important to voice these questions and to hear the different points of views,” she said. “I’m going to meet with the students and try to see what it is that they want, and what can we do within the confines of the rules and regulations and processes of the university.”

She added that within those confines, creating support groups to ensure students feel safer on campus might be one example of what the university can do to help.

All agreed that the forum was a good place to start, but certainly not an endgame for conversation surrounding the article and the controversy it caused.

“I think there is an issue of free speech here, but at the same time, the university has an obligation to not only protect its students, but also do what’s right in the name of social justice,” Easton said. “I just think a lot has yet to happen, and everyone has to figure out what needs to happen in order to address this issue in the best way that could be done.”