The 1975 make waves with return to Midwest 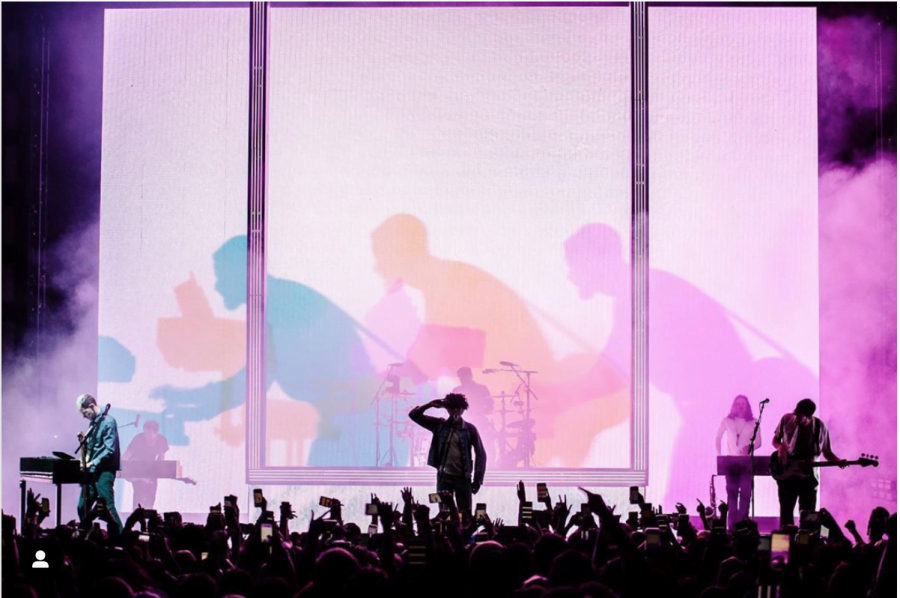 The 1975 performing at Chicago's United Center on May 8.

Contrary to popular belief, every city isn’t a band’s favorite stop on tour — or at least in The 1975’s case.

But frontman Matty Healy says the “worst hangover of his life” happened in Chicago, so that counts for something, right?

As a part of their “A Brief Inquiry into Online Relationships” tour, the Manchester-based group made their long-awaited return to Chicago at the United Center on Wednesday, May 8, and Milwaukee’s The Rave/Eagles Club on Friday. Solely in the interest of investigative reporting, the DePaulia attended both shows to see how they stacked up.

The group was joined by close collaborators No Rome and Pale Waves, two acts under their Dirty Hit Label.

No Rome, a relatively new London-based Filipino musician, took the stage in both cities first. Despite his brief career, Rome has established quite the name for himself with his chillwave tunes. “Do It Again” started the show but songs from his newest EP “Crying in the Prettiest Places,” including “Cashmoney” and “Pink,” dominated the set.

Next up was Pale Waves, a group also based in London, with a similar sound to The 1975. Beginning with “Television Romance,” red lights pulsated throughout the arena as the grunge-pop group played hit after hit. “The Tide” and “There’s a Honey” tied for best song of the set — in both cities.

After Pale Waves’ set ended, “The Man Who Married A Robot” instrumental played, gradually getting louder throughout the venues as crews prepared for The 1975 to take the stage.

At its loudest point, the lights suddenly began flickering with the venue soon completely blacking out as the newest rendition of “The 1975” began playing. The giant screen — replacing the iconic rectangles — displayed the lyrics in case anyone forgot amid their tears and/or screams of anticipation.

One by one the band took their places with screams from the audience getting louder. Healy took center stage as “Give Yourself A Try” started off the set with a bang. “TOOTIMETOOTIMETOOTIME” followed and only upped the enthusiasm, especially because of Healy’s groovy dance moves. “She’s American” filled the venue with nostalgia, a feeling that would only be intensified by later tunes.

Healy put on his newly iconic rabbit-ear hat as the onstage treadmill activated itself (yes, you read that right) for “Sincerity is Scary.” The screen behind the stage transformed into the setting from the song’s music video.

“You’re lucky we just keep getting better,” Healy exclaimed as he began running in place with the group’s dancers — while simultaneously playing guitar for “It’s Not Living (If It’s Not With You).”

Lighting a cigarette and gently grasping a glass of wine, Healy slowed down the high intensity with “A Change of Heart.” The tranquility was fleeting, however; his demeanor — and dance moves—once again became erratic for “Love Me,” which mocks the ridiculous, drug-fueled expected lifestyle of rock stars.

“Loving Someone,” a moving anthem for members of the LGBTQ+ community, followed as Healy expressed the groups’ support for everyone within the community. To exemplify this, “I Couldn’t Be More in Love” was right after. No Rome once again took the stage to join the group for “Narcissist.”

The trifecta of “Robbers,” “Fallingforyou,” and “You” followed, with each band member putting their entire heart and souls into delivering the most nostalgic renditions possible. Whether it be personal connections to lyrics or just the feeling that emanated around the venue, some fans were visibly crying as they sang along, which only exemplifies just how moving these songs are.

Unlike other shows, Healy decided to play “Medicine.” “I Like America and America Likes Me” perfectly juxtaposed the romantic vibe of its predecessor. The high-intensity track hits different live as Healy screams the lyrics just as passionately as he does in its recorded counterpart.

“Somebody Else” and “I Always Wanna Die Sometimes” were equally amazing in their own ways, but what truly stole the show was “Love It If We Made It.”

Visuals depicting the volatile aspects of modernity described in the lyrics clashed with colorful flashes of light while fans screamed along with Healy. His passion in this song was unmatched, so much so that he fell while performing and continued to sing his heart out while on the ground. Once he recovered, he once again joined the backup dancers for a routine that complemented the songs’ hopeful sounding-end.

The nostalgia for longtime fans and the band alike was at an all-time high with their breakout songs “Chocolate” and “Sex.”

“The Sound” closed out the set and I left with the impression that it was the best show I’ve ever attended, but then Milwaukee happened. This show had a completely different vibe, but in the best way possible.

Ditching the 23,500-capacity arena for the 3,500-capacity Eagles Ballroom, the show featured less extravagant visuals and was much more intimate — reflecting the group’s earlier days. No Rome and Pale Waves once again gave incredible sets, but The 1975 delivered an unforgettable performance.

Donning a fur hat, Healy rushed the stage as “Give Yourself A Try” once again began their set. His hyper stage presence was only emphasized during this performance as he jumped from amp to amp to be as close to the crowd as possible. Unfortunately, the smaller sized stage did not allow for the “Sincerity is Scary” treadmill, but Healy did not let it deter him as he danced around.

The “Robbers,” “Fallingforyou” and “You” trifecta became a quadfecta as “If I Believe You” was unexpectedly thrown into the mix — to the delight of fans.

Perhaps it’s because of my history of attending this band’s shows, but “Sex” was the best song of the night. The pit seemed to move as a whole as strobe lights illuminated the arena throughout the song’s iconic guitar solos. “Love It If We Made It” was a close second, with Healy taking a knee in protest of the social injustices addressed in the song to close it out.

It may have taken three years, but the group made a beyond triumphant return in this run of shows in the Midwest. Oddly enough, it felt as if no time had passed at all. With the fourth album in the works as they finish up touring, the only question is how they will top these shows in their next run.

The trope of equating shows with spiritual experiences is overused, but there’s just no better way to describe a show from The 1975.