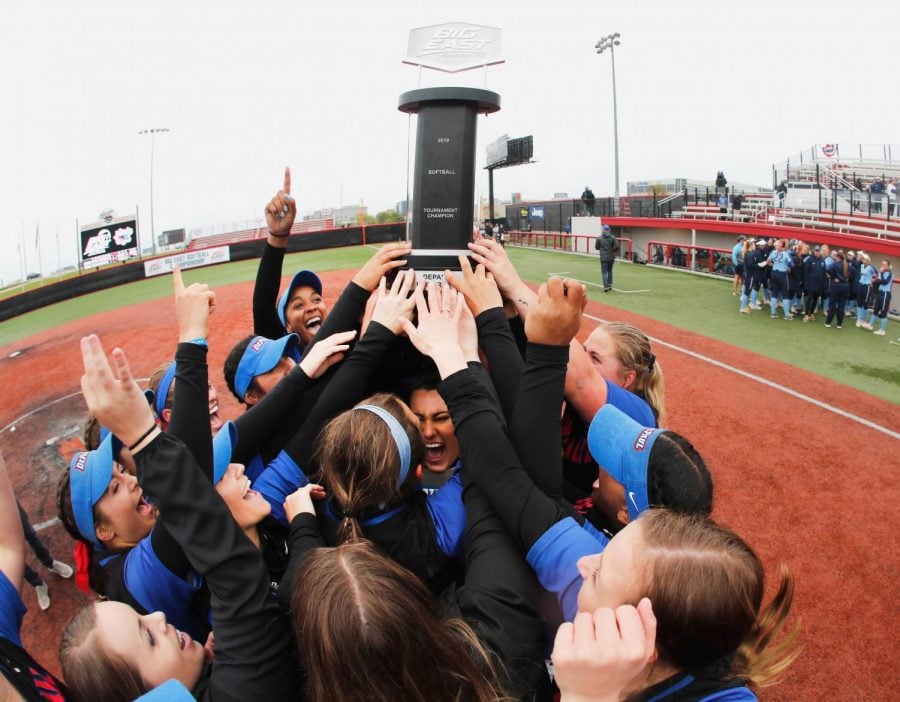 The DePaul softball team holds the trophy up after defeating Villanova 11-10 in the Big East Tournament title game on Saturday.

Through the first five innings Villanova was dominating DePaul, the Wildcats had an 9-3 lead, 9-6 hit advantage and had the opportunity to add even more runs as they left eight players stranded on base, but even with them failing to add to their lead they were only six outs away from winning the Big East Tournament title.

Then the bottom of the sixth inning happened.

Even with those two runs Villanova was still in the driver’s seat, as they needed just one out to get out of the inning and still had a comfortable 9-5 lead. But then senior Morgan Greenwood stepped up to the plate.

With two players already on base, two outs and a 2-0 count, Greenwood hit a rocket over the fence for a three-run home run, cutting the Wildcats lead to just one run. That special start that Villanova got off to and their commanding six-run lead was evaporated. All the momentum and confidence that Villanova built through the first five innings was shifted to the Blue Demon dugout.

“When I came up to bat, I looked at the scoreboard and was like wow, one swing could put us just one run away,” Greenwood said. “I was thinking just to pass the bat to my teammates and find a way to just get on base. I was just so excited and it’s amazing to energize your team and find a way to get back and get this win.”

With all the momentum and confidence now on DePaul’s side, freshman Gabby O’Riley drilled a single into the outfield, driving in the tying run. With another two runners on base and two outs, senior Brianna Viles came up to bat and drove in two runs to give the Blue Demons an 11-9 advantage.

“Honestly, I think this tops it off being my senior year and being able to help my team contribute like that, that meant a lot,” Viles said after the game on what it meant to drive in the game winning run.

Eventually the Wildcats were able to get out of the inning, but the damage was already done by the Blue Demons. DePaul scored eight runs in the bottom of the sixth inning and now was standing three outs from being crowned Big East Tournament champions for the third season in a row.

With three outs standing between the Blue Demons and another Big East Tournament title, Villanova kept fighting till the very end as they hit a home run to cut the Blue Demons to lead one. But after junior pitcher Natalie Halvorson came into pitch for junior Krista Dalgarn in the fifth inning, who gave up seven runs in the game, Dalgarn came back into the game and got the final two outs to give DePaul the 11-10 victory.

Halvorson got the win, however, and was named the Most Outstanding Player in the tournament after she pitched a four-hit shutout against Providence in the semifinals on Friday and getting the win in the championship game on Saturday.

Under first-year head coach Tracie Adix-Zins, the Blue Demons had a lot that could of gone wrong this season and almost did go wrong in the end. With only two pitchers on the roster this season, an injury to one of them could have spelled serious trouble for DePaul. Having only four seniors on the roster and a bunch of new players being added to the mix, plus having a new coaching staff, building that chemistry and being on the same page was another obstacle the team had to overcome.

“It’s a lot, it’s very overwhelming,” Adix-Zins said. “I think it just shows a lot of how hard [the team] worked. The time we put in over the fall, over the winter and through the spring, it’s a testament to the what we’ve done.”

For DePaul, they now turn to getting ready for the NCAA Tournament and preparing to make another deep run in the tournament.