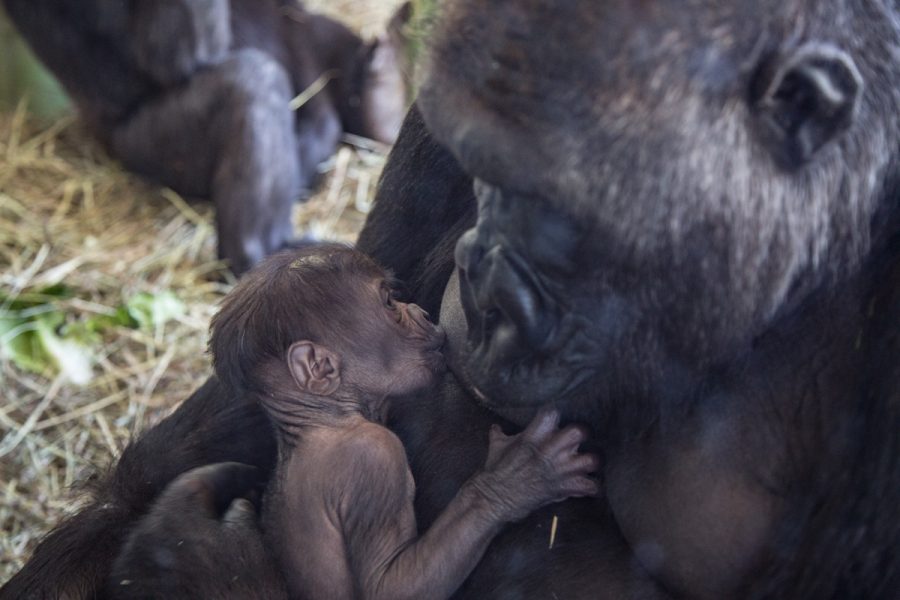 The gorilla infant is breastfed by its mother, Rollie. This is the first gorilla born at Lincoln Park Zoo in four years. The last one born, Bella, was mothered by Bahati and fathered by Kwan, who also fathered this one.

This year’s Mother’s Day was made extra special for Rollie, one of the Lincoln Park Zoo’s western lowland gorillas, by the birth of her second baby on Sunday, May 12. The species is listed as “critically endangered,” making the birth all the more exciting.

The still-unnamed baby was born at exactly 2 a.m., and is estimated to weigh between four and five pounds. Since his birth, he has remained closely snuggled up to Rollie.

“Gorilla infants are very dependent on moms for their care,” said Jill Moyse, the zoo’s curator of primates. “The infant will continue to make critical milestones such as crawling, walking, eating solid foods and playing with others.”

Lots of work goes into preparing for the birth of gorilla infants. Moyse said that once the zoo receives a recommendation to breed gorilla pairs from the Western Lowland Gorilla Species Survival Program (SSP), a female gorilla is taken off her birth control. Zoo attendants must continue to ensure she receives proper nutrition, fluids and vitamins, and then they start to train maternal behaviors with her.

“Some of the behaviors are to bring an object —‘the baby’— to the mesh so keepers can see it,” Moyse said. “We also desensitize mothers to bottles and presenting certain body parts to the mesh so we can monitor the pregnancy.”

The gestation period for western lowland gorillas is roughly eight and a half months, and Moyse said that gorilla mothers are usually in labor for six to eight hours, though it does vary between females. Once the baby is here, it’s important that the newborn stays close to its family.

You can watch the birth here.

“We do not separate mothers and infants from their social group,” she said. “Gorilla groups are family, and they need to be with their social group to feel comfortable and safe. It also allows the juvenile females in the group to learn proper maternal skills from mom.”

While the zoo can’t say for sure whether the newborn will stay at the Lincoln Park Zoo for its whole life, Moyse said it is typical for the male to stay within its family group until it is between 7 and 10 years old. Gorilla transfers for social or breeding purposes are recommended by the SSP.

Zoo-goers said they were astonished by the tiny baby and the family’s close attention to it.

“It’s amazing seeing him here, with his family all surrounding him,” said Heather Terry, a mom from Champaign-Urbana on a class field trip with her son and his school. “And of course, the mother—like any good mother—is protecting him, which in this case means hiding him.”

Her son Luke, 8, added that he couldn’t believe “how cute” and “how human” the baby looked at just under a week old.

Other onlookers said they saw the bigger picture when watching the newborn gorilla.

“It’s interesting to see the cycle of life,” said Curt Lundquist, a Chicago resident whose zoo day was inspired by friends visiting from San Francisco. “The older ones have silver backs, you know, and they’re the kings of their surroundings. That’s one end of the spectrum. This is the other end of the spectrum. It’s a brand-new boy, and so he will grow up to be a silverback one day. We see both ends of the spectrum, and it’s just so cool.”