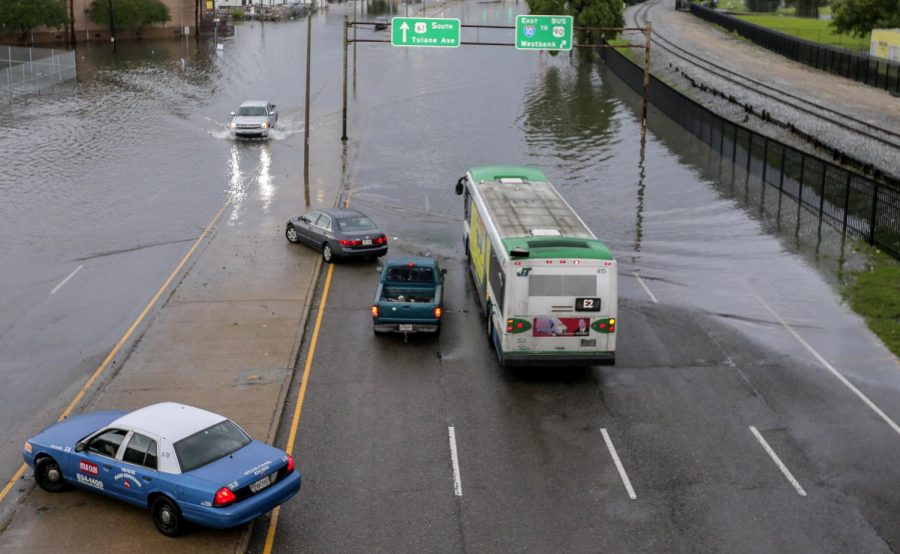 DAVID GRUNDFELD | THE TIMES-PICAYUNE VIA AP

Parts of Airline Highway is covered with water in New Orleans Sunday, May 12, 2019. New Orleans residents awoke to flooded streets Sunday and the Mississippi Highway Patrol closed part of a highway due to heavy rains that also may have contributed to a freight train derailment.

As a child, Michelle Ruiz would often wake up to inches of water in her family’s basement apartment in Pilsen. When a rainy period was coming, they would prepare by moving their belongings off the floor, and often pitched in to repurchase a new sub pump every few years with her aunt, who owned the building.

Climate change can feel distant and far off for Midwesterners, but in Chicago, regular occurrences like this are examples of its effects. Urban flooding is an unequal burden for the South Side, with flooding calls from the city’s South Side making up the majority, according to a recent South Side Weekly report. The potential solutions are not always within reach.

What gives urban flooding its specificity is the cause of the flooding. Urban flooding occurs in densely populated areas where there is not sufficient drainage area for rainfall, causing the sewer system to become overwhelmed. Water then gets forced back onto streets and into people’s homes. It’s more frequent than large scale flooding, though less visible. It causes expensive, wet problems for populations that often cannot afford an effective fix.

Urban flooding is not a problem that is going away. A recent report from the Environmental Law & Policy Center and the Chicago Council on Global Affairs noted that climate change impacts could increase the frequency of severe rainfall locally. Data from the National Weather Service  showed that April brought over six inches of rain to the city, higher than the average, and May has already brought close to four.

Chicago encourages permeable pavement as a solution and has begun implementing it with the Green Alley Project, an effort with a goal of turning the city’s 1,900 miles of public alleys into sustainable areas that better manage the city’s resources.

Permeable pavement is also encouraged for driveways, parking lots and even streets. This pavement can come in the form of asphalt, concrete or permeable pavers, which all are created porous to allow water to pass through the surface and slowly infiltrate to the underlying soil. This, in combination with existing systems like the Tunnel and Reservoir Plan (TARP) further reduces stress on the sewer system, preventing flooding and river contamination.

But permeable pavement comes at a cost. The city’s website lists the cost as two to three times greater than regular concrete or asphalt. The typical cost for a conventional driveway is $3,040. That means a permeable driveway could be upwards of $6,000.

James Creighton, a Champaign resident, was part of the Washington Street West neighborhood steering committee. It was a group that got the city of Champaign to spend millions of dollars to build infrastructure to manage stormwater after residents were fed up and unable to continue paying for home repairs. Creighton grew up in Blue Island, where he remembers his basement flooding multiple times in the ‘60s and ‘70s. Creighton said the options to prevent flooding at the individual level aren’t feasible for most families.

“The only solution is a $15,000 fix. Dig up the yard, find the drain pipe and have a plumber put on a back flow valve,” he said. “It allows stuff to go out, but won’t allow it back in. The problem is South and West Side folks can’t afford that fix.”

The city’s largest effort on storm water management is (TARP), a system of deep tunnels and reservoirs that captures and stores combined stormwater and sewage that would otherwise overflow into waterways in rainy weather. The water that TARP captures is eventually pumped to a water reclamation plant to be treated before being put back into waterways. The system is still being expanded, with more reservoirs set to be complete by 2029. The current capacity that TARP is able to manage is 11 billion gallons.

“Some areas feel the impacts worse than others due to differences in sewer sizes and conditions, development levels, stormwater management facilities and geology,” she said in an email. “The southeast side of Chicago has a fairly low elevation and as a result, flood waters can reach the basement sooner than in other areas of the city.”

Fore said when TARP is complete, there will be significant differences.

“Our modeling has shown that basement and street flooding will be significantly reduced with the reservoirs online. When TARP is complete, we anticipate increases in biodiversity/fish species as well as a positive impact to recreation and development along waterways,” she said.

Since TARP was introduced in 1985, it has reduced 85 percent of sewer overflow pollution, but statistics don’t mean much for communities that deal with urban flooding regularly.

“…[A] family who owned in Pilsen as well have noted that if they have basements, it would flood under the same conditions,” Ruiz said.