OPINION: Golden Apple of my eye

A love letter to the humanist power of journalism 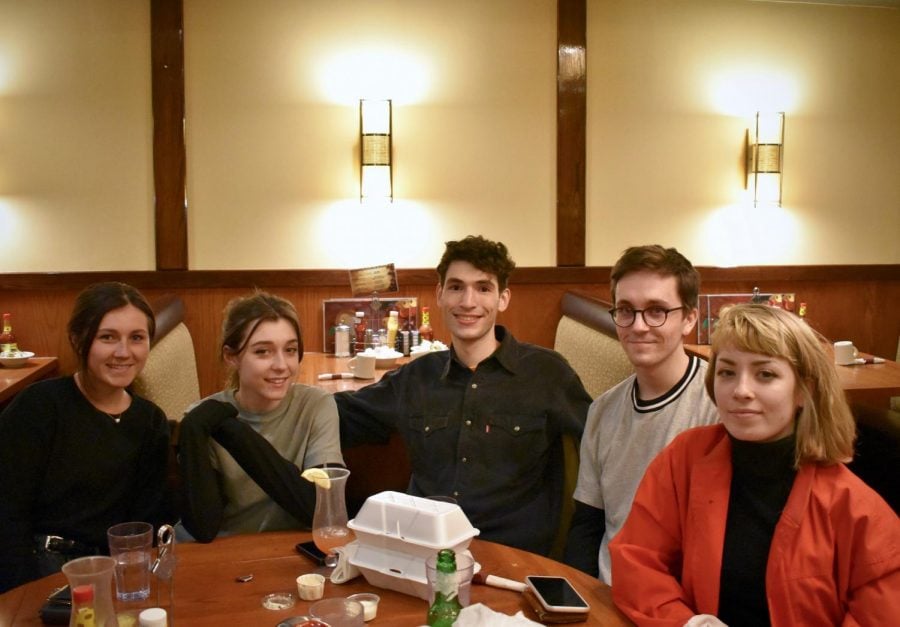 Five diners inspired by the recent "This American Life" re-broadcast to revisit the historic eatery.

Journalism has historically served the public’s desire to be shocked by cultural and global news in order to feel challenged, uncomfortable and passionate. Since the advent of print, the field has largely been responsible for the facilitation of shared experiences in order to unite unfamiliar communities. Despite this, journalism has been critiqued because of a discrepancy between reporters and their audiences. The cultural significance of journalism has been lost on the public and, conversely, reporters have lost sight of what the public needs to feel engaged.

In Hossein Derakhshan’s Nieman Lab article “The news is dying, but journalism will not — and should not,” media scholar James W. Carey is quoted saying “News both forms and reflects a particular ‘hunger for experience,’ a desire to do away with the epic, heroic and traditional in favor of the unique, original, novel, new — news.”

This “hunger for experience” is what seems to drive the public’s desire for journalism, especially stories that focus on the simultaneously different and common lives of those unknown to the audience.

In the year 2000, reporters for the long-running radio program “This American Life” took shifts at The Golden Apple, a popular Chicago diner. For 24 hours, these reporters strived to fulfill this “hunger for experience” by interviewing each person they encountered in the diner.

The atmosphere of the diner is clear, being revealed in the story as a place of community, warmth and comfort. There are stories of a mother who would tell her kids to return to The Golden Apple when they found themselves lost, regular customers who would come in every day for a cup of coffee, and visitors who simply became entranced by the welcoming ambience. The notion of a diner like this seems timeless, as is clear in the May 2019 release of the original program.

I recently encountered this podcast myself and became immediately interested in this concept of preserving human stories through the lens of media. I visited the diner last week and met a group of young adults there who had decided to come because of the program from “This American Life.”

While at the diner, I also met two men who had been coming for years. The duo, Chuck and Zane, chuckled to each other when I asked them if they had ever been there before. Zane had been coming to the diner since he moved to the area nearly 10 years prior. Chuck, however, has since moved away but used to visit all the time when he had lived there 25 years ago. The two had just finished their meals but seemed delighted in speaking to us about their lives and experiences. Throughout the conversation, they spoke about their perceptions of journalism and especially the form that reflects human experience.

Chuck and Zane were skeptical of the current state of journalism but had a positive view toward the kinds of stories in “This American Life.” They said they believe this particular form of journalism is especially desirable because there is no bias; it simply serves to “broaden your global perspective.”

As the two men pointed out, there has been much controversy in the field — yet people still seem to possess a desire to glance into the lives of others unknown to them. This may stem from the commonality of these stories: No matter the time or place, the underlying factor of the human experience remains. We are able to find both solace and intrigue in the notion that there are people all around the world with experiences just as deep and rich as ours, despite being vastly different.

What the Golden Apple does, however, is provide a place for that shared human experience.

Pete Evangelou, one of the owners featured in the original program, said that the diner has remained largely the same since the release of the program in 2000. He said that “people change, neighborhoods change” but the diner has essentially remained the same. The people and the neighborhood have evolved as a reflection of the time, but the community that the diner facilitates has endured with this passage of time.

Journalism, as a general field, has been under scrutiny because of a discrepancy in the connection between reporters and the public. In debates on whether journalists should be covering more policy or scandal, there seems to be a lack of reporters’ knowledge as to what the public needs and wants. If the public thinks that their needs are not being met in the media, they are less likely to effectively engage. Pieces on human experience aid this discrepancy in some way by focusing on the lives of the common person, simply providing an outlet for readers to engage with communities they would never have known about otherwise. Stories on the common lives of people are simple and will always connect with readers because the human experience is timeless.

Though it takes on different forms, the aim of journalists should largely be to connect and inform communities so that their readers are more able to understand and empathize with different types of people.

The Golden Apple is a perfect facilitator for this necessary type of connection. The reporters from “This American Life” were able to present an array of human life, providing a simple glimpse into the fantastically diverse and strange collection of human existence.

As human beings, we will always have this insatiable “hunger for experience.” Our goal as reporters, and as readers, should always be to satisfy this desire. Through the lens of human experience stories, maybe we will be able to do so, or at least come closer to it.