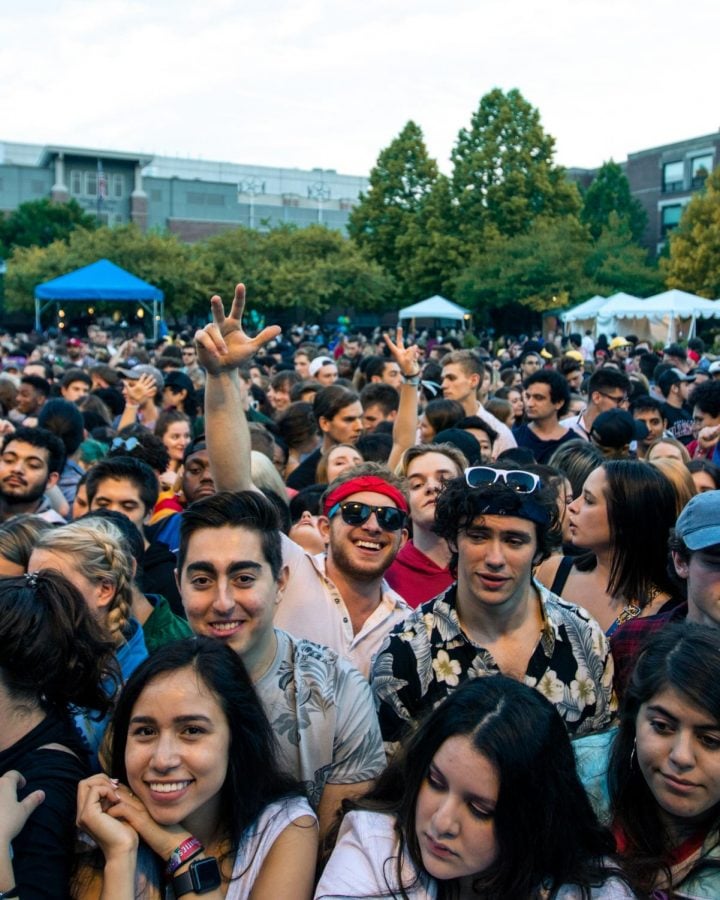 The crowd of students as the sun began to set and the show was set to start.

Last year I dove into the center of FEST to try to convey an authentic experience of what the pit has in store for students. Spoiler: it was exactly as you’d expect. To switch things up this year I adopted the position of a stone-cold sober fly on the wall. Well, more like a person standing next to some bushes a safe distance from my inebriated peers but you get the point. For a $10 concert at 7 p.m. on a patch of grass in a residential neighborhood, FEST 2019 was impressive.

Emilie Hanson, Nathan Hile, and Lucia Rodriguez-Nelson are all freshman theatre students who decided last-minute to attend the show. While they had few expectations heading in, they were told FEST was overall a good time. Importantly, they saw this as an opportunity for the different factions within DePaul to come together.

“I never get to meet people in general DePaul,” Rodriguez-Nelson said, noting the separation between the Theatre School and the rest of the student population.

“Now we got to be not even an inch away from general DePaul,” Hile added jokingly.

If, like me, you were basing your expectations for what the members of 3OH!3 looked like on the posters plastered across campus, you were undoubtedly surprised to not find a Thor look-alike in Sean Forman, one half of the duo. Instead, his short, gray hair stuck out against his flamingo-patterned shirt. It seems the passage of time since their 2008 hit “DONTTRUSTME” topped the charts has benefited us both — Foreman has achieved silver fox status and I got my braces off and cleared up my skin. For the most part.

Foreman and Nathaniel Motte, the other half of the duo, spent almost half of their time onstage interacting with the crowd. They bonded with the students so much that a dedicated fan named Cameron donated $2 to the group. Sure, you might be thinking, “That’s nothing.” But think about it in terms of this school, with this tuition. In that sense, Cameron just gave up a fortune.

Imagine your cool, older cousins letting you hang out with them for the day — that’s what this felt like. They tossed out setlists, talked casually between songs and even welcomed a DIBS stuffed animal to join them on stage. Little did they know that that little blue amorphous creature has truly unmatched starpower and stole the show immediately. It also served as yet another reminder that DIBS is not the greatest name considering how a chant of his name sounded like a mob screaming “NIPS” — at least according to Foreman.

“They have a distinctive stage presence,” said Mara Reed, a sophomore environmental science major. When pressed for a one-word description she landed on “messy.” Is that good or bad, you ask? “That’s up for interpretation,” she joked.

In a truly incredible display of self awareness, their set was comprised of some of their newer songs but anchored by the tunes we grew up on. Nearly a decade has passed since they first landed on the charts, but “First Kiss,” Starstrukk” and “DONTTRUSTME” are still just as cherished.

Case in point: The Helen Keller line in the latter song’s chorus certainly didn’t age well but even the most dedicated social justice warriors in the crowd overlooked the transgression in the name of sentimentality. An homage to the time in which none of us were aware that everything that has ever existed has some negative connotation and we just casually listened to the radio. Ignorance truly is bliss.

Like many attendees, the duo couldn’t help but take note of the festivities happening elsewhere on the grounds, namely the bubble-blowing station set up in the middle of the grass directly ahead of the stage. Foreman’s fascination with the station ultimately led to him directing the entire crowd to “pay attention to the real show” as two students created bubbles the size of Father John Egan’s statue.

For those students who were less bubble-inclined, sidewalk chalk, marble body painting and various food stations were set up around the Quad to partake in as well. These extra activities proved vital during the more than half-hour transition between performances as the WiFi gradually became less reliable as more students filed in.

As Lil Yachty’s entourage and I stood next to the production tent, the DJ onstage rose to the occasion in maintaining the energy of a group of largely inebriated college students. No small feat to be sure. As the minutes crawled by and the crowd waited for Lil Yachty to emerge from the wings, a very unofficial-looking man in a white T-shirt with a backpack draped over one shoulder occasionally walked across the stage. His identity remains unknown but his purpose is eventually explained.

Finally, after what felt like a wait as long as a once-a-week night class, the Atlanta-based rapper emerged onstage donning a Braves jersey and khaki pants that resulted in a pesky wedgie that he valiantly battled throughout the night. The distinctive call and response of “Lil Boat” between the artist and the crowd was as entertaining as it was reaffirming that DePaul is a community after all — or at least at FEST we are.

As expected he played some of his biggest hits, including “Minnesota,” “One Night” and “Broccoli.” His songs were scattered between bouts of direction for the crowd that went largely unfollowed, whether it be to open up a mosh pit or to participate in an audience-wide water fight with water bottles thrown from the stage.

Remember that guy with the backpack? It turns out he was Lil Yachty’s personal Poseidon and was in charge of stocking the stage with water bottles before the show. Yet another reminder that not all heroes wear capes — sometimes they simply rely on a basic Hanes shirt to do the trick.

By this point, what was lush and green earlier this week had been reduced to a flattened, muddy field. Shoes in the pit had become unsalvageable as Facilities Operations landscapers watched their work be trampled, literally.

In the end, the whole thing wrapped up promptly at 9:30 p.m. and a rush of students headed directly for the Student Center for a custom “potato bar” — because that’s a thing, apparently. As the Student Center staff anxiously kept an eye on the building, FEST-goers spread out and regrouped before continuing their Friday night. A women’s restroom sink fell victim to the vomit of an overzealous freshman, every available chair in the building seemed to be occupied and the whole time mud was being carried in, creating a makeshift path between the two exits.

“It was a lot more hype than I thought, I’m not gonna lie,” said Ian Nix, a junior animation major. “I had a lot of fun.”

“It was a lot better than last year,” his friend Darnell Langston added. “It was the right amount of energy — everyone’s kinda chill, minding their business.”

As always, and perhaps as it should be, FEST functions most effectively as an epic pregame, the start to your Friday night and, by extension, Memorial Day weekend, instead of a standalone concert (it is only $10 after all). Still, by most accounts, that was a $10 well spent.