State bill sets aim at cracking down on human trafficking 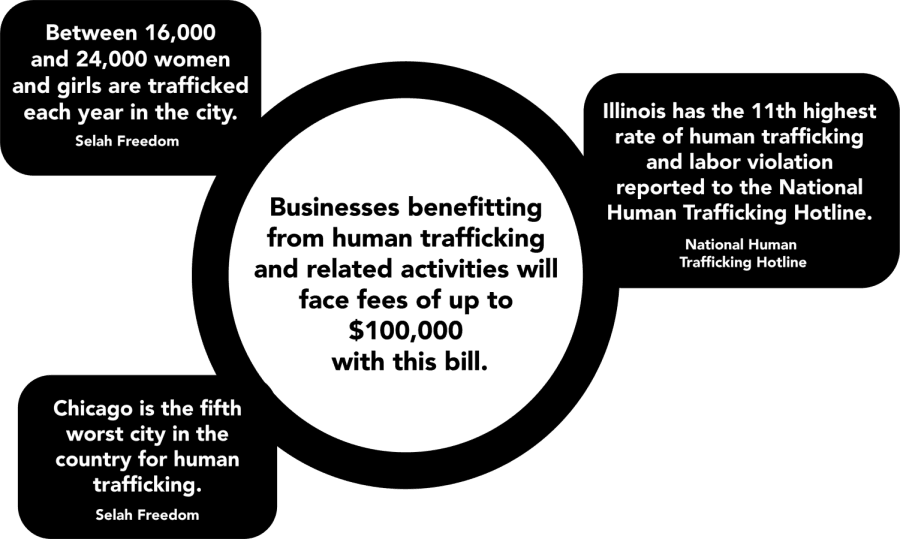 Chicago is the fifth-worst city for human trafficking, according to national advocacy organization Selah Freedom, and between 16,000 and 24,000 women and girls are trafficked every year in the city. Illinois had the 11th-highest rate of cases of sex trafficking and labor exploitation being reported to the National Human Trafficking Hotline.

“Exploitation of women and children thrives in silence, which is why it’s critical that we speak up for those in need,” Madigan said. “This bill offers survivors the time they need to come forward and make their voices heard; it gives our police officers the tools they need to bring predators to justice; and it ensures those who exploit others pay the price.”

Businesses benefiting from human trafficking activities would now face fines of up to $100,000.

The United Nations defines human trafficking as “the recruitment, transportation, transfer, harboring or receipt of persons by improper means (such as force, abduction, fraud or coercion) for an improper purpose including forced labor or sexual exploitation.”

Paula Besler, national director of advocacy and awareness at Selah Freedom, said the bill is a positive step forward because it puts the accountability on the organizers, not just on the victims survivors? involved.

“I don’t think any fine is high enough, but this is a good start,” she said.

Advocates against human trafficking agree that more time is necessary than current law allows to report organizers of these crimes.

Besler said human trafficking is a highly organized crime, yet the buyers are rarely the ones who get punished.

“What’s great about this legislation is that it’s recognizing that,” she said. “It’s a great start to look at businesses, not just individuals.”

Another aspect of the legislation would require that all law enforcement officers receive training on how to identify and investigate human trafficking. Although new recruits already receive this training, it isn’t required for current officers.

Besler said some of the signs of human trafficking include someone being unable to explain their medical history, not speaking for themselves, looking down, traveling with someone older who isn’t family, a child dressed older and more expensively than is typical of children and, sometimes, physical abuse.

Other signs, according to Selah Freedom’s website, include lying about one’s age, well-rehearsed or inconsistent stories, lack of knowledge about a given community or whereabouts and signs of branding.

Beyond this legislation, Besler said that more proactive, prevention-based education is needed. For example, because most sex trafficking and exploitation begins online, education should focus on teaching children and teens how to be safe on the internet.