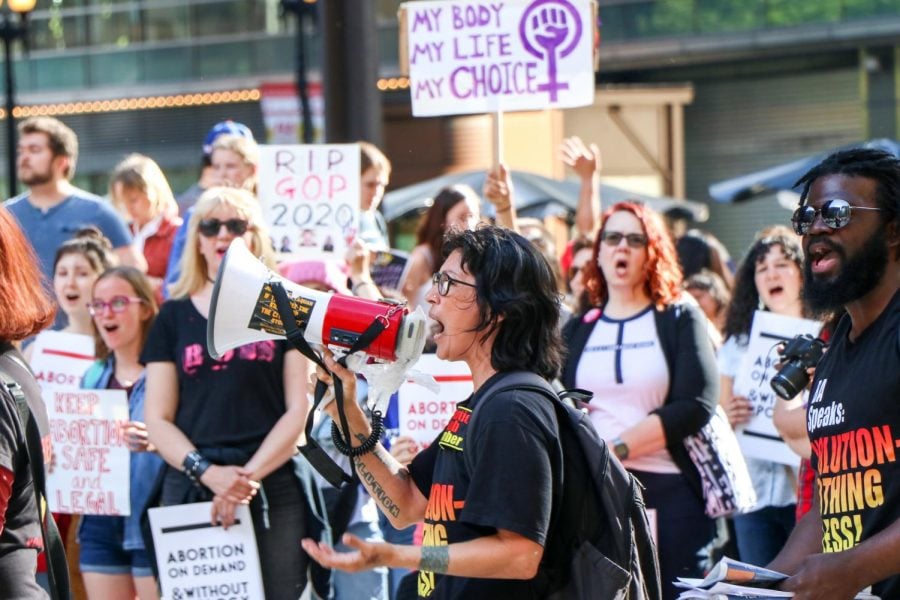 Maya Cruz, a supporter of communist group Revolution Club, spiritedly addresses the crowd at the pro-choice Chicago Rally for Reproductive Justice on Thursday.

Protesters on both sides of the abortion debate stood their ground Thursday at the Chicago Rally for Reproductive Justice.

The protest began in the Daley Plaza, with speakers addressing the crowd from the Picasso sculpture. Representatives from Chicago Abortion Fund, Midwest Access Coalition, Lifted Voices and the National Asian Pacific American Women’s Forum spoke and there were performances by Atena Danner and the Clamor and Lace Noise Brigade.

Protestors were unified in chants like, “All genders, all voices, our bodies, our choices” and, “Not the church, not the state, women must decide our fate.”

Among the many groups in the crowd was Revolution Club, a group that calls itself the “voice of the Revolutionary Communist Party” in the United States and is calling for an overthrow of the system.

“Since 1973 — when millions of women took to the streets and righteously won the rights to an abortion — there have been restrictions after restrictions after restrictions,” said Maya Cruz, a member of Revolution Club. “When people say, ‘we’re not gonna go back,’ what we’re talking about is when women bled to death in motels, when women bled to death in back alleys. And now what we’re facing is they want to say that a fetus, clumps of cells, is actually a person. And that means that anyone that has an abortion, anyone who assists a woman to have an abortion, that’s murder. And that’s a dangerous path.”

The rally was planned in light of new laws restricting abortion to various extents that have been passed in seven states so far, including Georgia, Ohio and Alabama. In Ohio, lawmakers are considering criminalizing birth control. The new Alabama law — which criminalized abortion at all stages of pregnancy and has no exception for rape or incest — sparked the conversation.

Protesters in the crowd echoed Cruz’ concerns with the direction in which abortion laws seem to be heading.

“As someone who is going to school in Ohio next year and as someone who takes birth control — not because of contraceptive reasons technically, but because I have PCOS and that’s the only way I can get regular periods — it’s just a lot for me to consider that people in Ohio who are making laws are saying birth control is just for contraception and that it’s technically abortion because of that,” said Grey Hunt,18.

“This is a very important issue, but it’s a part of a larger attack on established law and branches of government,” said Matt Greenberger, another protester. “Everything that’s going on in this country is to try and undermine, I think, what was at least a reasonably working democracy before.”

On the other side of the plaza, a small coalition of pro-life supporters gathered to voice their views. The counterprotest featured a small marching band, with protesters chanting in support of abolishing abortion.

Those attending the counter-protest expressed their desire for the abortion laws in other states like Alabama and Ohio to reach Illinois.

“I do [think the same laws in Alabama should be instituted here],” said Anna Streeter, 22, a pro-life protester. “Honestly, there’s so much talk about how it betrays women and it hurts. If you actually read the bill, it’s about giving dignity to life in the womb and is nothing about taking anything away from women or putting women down. I would never stand up for something like that. It’s about protecting the most vulnerable in our society.”

Pro-life advocates also expressed their desire to restrict abortions in the hope of protecting unborn children.

“I think it’s obviously an unborn child in the womb and I think that child deserves the same rights as the rest of us,” said Susan White, a pro-life protester. “I don’t think it’s part of its mother’s body. I think it is a separate individual, and I think it needs protection.”

Many of the pro-choice protesters said that they felt that the pro-lifers present did not have a strong argument.

“They’re showing these visceral pictures of these aborted fetuses, and they’re saying, ‘Oh, this is a 15-week-old fetus,’” Hunt said. “I feel like a lot of their information is not correct on the stage at which a fetus is being presented. A six-week-old fetus is, like, the size of a piece of rice, and people are trying to pass it off as this fully formed human being that doesn’t look like a piece of shrimp.”

The crowd of pro-life advocates was primarily made up of teenagers and elderly women. Some pro-choice advocates said they felt the young people did not know what they were truly preaching.

“I think there’s a lot of young people over there who don’t really understand what they’re doing,” said Jill Leahey, a pro-choice advocate. “They kind of grew up in the church and were told what to believe by their parents and never really had a chance.”

“Look how young they are,” Greenberger said. “These are just kids.”

The pro-choice protesters responded to the pro-life presence, chanting, “Pro-life: It’s a lie, you don’t care if people die.”

Some on the pro-choice spectrum felt that pro-life supporters have misconceptions about the right to choose.

“I think a lot of people think that everyone is pro-abortion,” said Rosa Weiss, a 19-year-old student at the University of South Carolina. “Countless of my friends who are just as angry, especially a lot of my friends in South Carolina who are just as angry about this, would never have an abortion themselves, generally dislike the concept, even might think it’s murder, yet they don’t think seeking to solve the problem of abortion through legislative means is the right way to adequately regulate that issue.”

Following the initial gathering, pro-life protesters took to the street, blocking traffic along the way. The protesters ended their march at Trump Tower, where they reiterated their dedication to combatting the restrictions placed on abortion.

While much of the country remains divided on abortion, Weiss is hopeful that more meaningful conversations can take place across the spectrum.

“There’s a girl who is pro-life who’s coming around and trying to have conversations with people and it was really, really cool to have a civil conversation about where we believe life begins, about what we think the legislative response should be about how to maybe curb abortions and all sorts of different topics, that was really cool,” Weiss said. “I think the counter-protest, that’s great, everyone has a right to protest and I think that everyone should voice their beliefs so the fact they’re out here is a cool thing. I just strongly disagree with what they stand for.”