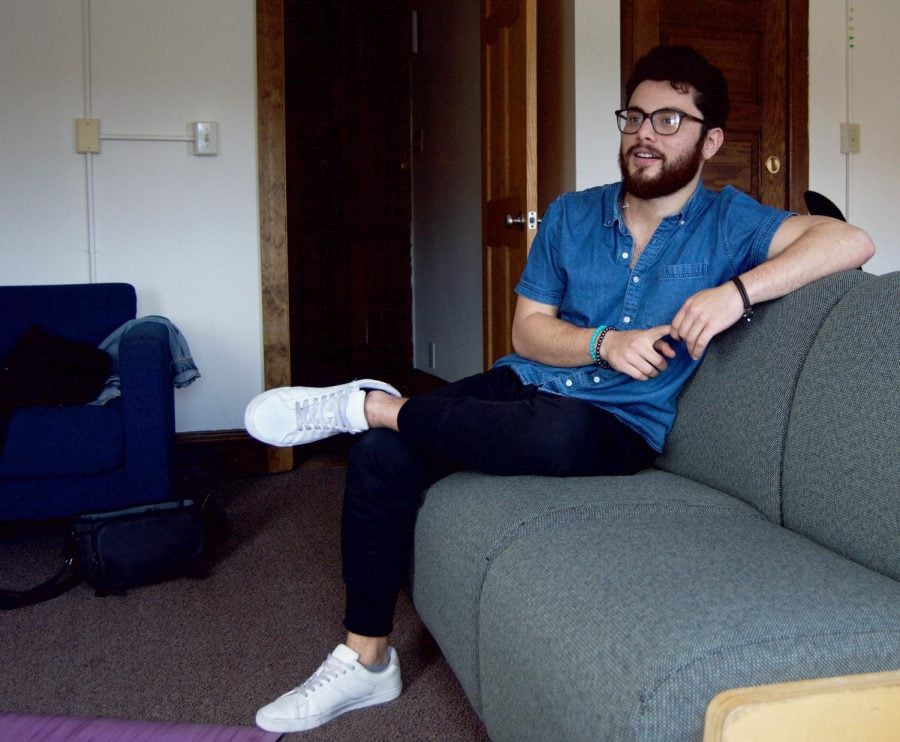 Dom Coronel sits in the Dax house, located in the Ukrainian Village. He talks of his political activism through the Students for Sensible Drug Policy and as an apprentice for Jason Ortiz, the board vice president for the Minority Cannabis Business Association.

It was getting to class every day that made it so hard for Dom. He would leave the shelter, get to the train and make sure the attendant wasn’t looking so he could hop the turnstile and run. The fare wasn’t an expense Dom cared to pay, and the more he jumped the turnstile, the easier it became.

When Dominique Coronel — he goes by Dom — a 22-year-old political science student, waited on the platform, thoughts raced in his head about a fatal jump that would take him from the world that did him wrong. The never-ending exhaustion, hunger and anxieties of failing his classes took hold. Academia wasn’t for the poor, homeless or people whose families weren’t in the picture. It was for people who got lucky.

Dom agreed to enroll in college when he knew he was housing insecure. He spent his first year at DePaul initially staying with a friend, then couch-surfing. Once his friends graduated and left the city, Dom found himself lost yet again. After taking some time off to work on the Bernie Sanders campaign in 2016, he came back to school and found himself in the same cycle he knew all too well. He stretched his scholarships, student loans and financial aid as far as they would take him, and he took refuge in a shelter on the outskirts of the city.

Going from the shelter to campus proved difficult because he was constantly on edge. People could find out he was homeless, someone could have seen him coming out of the shelter and expose him or one day, he might get caught and arrested for sneaking onto the train.

But no one really knew, Dom said. The isolation he felt from his classmates didn’t transcend himself, as his classmates were more involved in campus activities and the parties they would attend that weekend. His housing insecurity did not become a topic of conservation. He was different than his classmates and that did not concern them, but it ate away at Dom during his days on campus and his nights at the shelter.

“When we think about homelessness, we have this perception of someone who is clearly homeless,” Dom said. “You know you can spot them from a mile away — the way they smell, the way they act, the way they talk. But I had always learned to pick up nice words along the way, read a lot of books, just to make myself sound smart and to navigate life easier. I’m Latinx, but I’m passing, so that’s always really helped me a lot, too.”

Dom became comfortable with passing as white and middle-income as he was growing up. He realized it made going through the trials of life as a Latinx foster kid a little bit easier.

And still, no one knew.

College wasn’t on the minds of Dom’s parents. His mother lost her battle with drug addiction when Dom was young, and this left him in the care of his father, who was in and out of jail for most of his upbringing. Dom was filtered in and out of the foster care system every time his father came and went. In 2016, the U.S. Department of Health and Services and the Administration for Children and Family Services reported that 437,465 people under 20 years old found themselves in the same system.

When his father was released, Dom would be sent back to him, and they would find homes in cars, parks and shelters, and they learned to adapt to their surroundings. But the in-and-out continued until Dom was old enough to separate from his father.

“I learned at a young age about poverty and about being homeless and to learn to adapt,” he said. “But I also learned that I didn’t want this to be forever and that there were inequalities in my life that were not unique to me or a certain group of people, whether it was because I am Latinx or whether it’s because I’m the son of immigrants or whether it was because of a broken criminal justice system and the way we prosecute drug use as a criminal issue, not a health issue.”

Deciding to go to college when it may have not been economically feasible was on Dom’s mind when he enrolled. When the bills piled up and he realized the shelter wasn’t where he could academically thrive, when he found himself on the edge of the train platform, he reached out to the dean of his college to see what his options were. In the office waiting for his appointment, he saw a little orange flier with the words “Homelessness has no place.” Initially, he passed it off as another ticket to another crummy shelter, but it sparked his interest and he called the number at the bottom. On the other end of the phone was Sister Judy, a little voice that Dom described as “the most remarkable, spunky, fiery person who’s become my guardian angel.” They talked briefly, and Sister Judy, the program coordinator of the Dax Program, said Dom would be a great fit for their organization.

Depaul USA, a national organization that combats homelessness by fitting those who are housing insecure with foster families, teaching people about job and housing security and providing job hunting strategies. In Chicago, Depaul USA established the Dax Program to bring awareness to homelessness on college campuses and helps students secure housing.

The U.S. Department of Housing and Urban Development estimates that 58,000 college and university students currently face homelessness. DePaul estimates that, in any given quarter, 50 DePaul students are homeless or housing insecure.

After speaking with Sister Judy, Dom met with the Dax Program Director Abe Morris to establish a connection and see how the program could assist him. Dom needed the help, and the program’s flier, Sister Judy and the Dax Program came at a time when all other avenues of assistance failed him.

When Dom and Abe met, they went out for lunch, and that was that. Housing secured. He was first housed on-campus in a dorm and then in the Dax house, located in Ukrainian Village. The house guarantees students with a room for as long as they need. This past March, Depaul USA closed on another Dax house near Midway Airport.

Dom works a few shifts a week to satisfy the house’s rule of working at least 10 hours a week. He and his roommates keep the place clean and as comfortable as any other house. They discuss politics, race, religion and Cardi B. They don’t discuss their lives before they became housing secure. They aren’t in denial of it — they have embraced it by participating in this organization. Dom says he acknowledges it by not acknowledging it, and this pushes him forward.

Dom sees college as a way out of what has troubled him throughout his past and into a way to serve his community. Going to a large, urban university means he can participate in local politics, which he does as a member of the board of directors in the Students for Sensible Drug Policy and as an apprentice of Jason Ortiz, the board vice president for the Minority Cannabis Business Association.

“I feel a moral obligation to just do everything that I can to not only learn as much as possible for me to help myself grow and overcome and prove to myself that I’m not just some poor kid from the streets who died, but I do belong and I am smart and I’m just as smart as any other kid in these classrooms,” Dom said. “But also [I have] a duty and, frankly, a purpose in fighting or something much larger than myself that gives me meaning. It gives me something to wake up to in the morning.”

In the U.S., the stability that the Dax Program provides is rare. No other program in Chicago houses homeless college students or students in threat of homelessness the way the Dax Program. Many colleges, including Loyola University and the University of Illinois at Chicago, offer assistance in no-to-low-cost housing and food pantries, but they lack the same sense of stability the Dax house offers. The students receive their own room, a key and a place for cooking, cleaning and conversing.

“Other institutions and programs have a sort of shelter of some kind that can be the best thing for a certain time, but never before has it been done so well because I have that thing, my own room kind of thing and that stability,” he said.

The stability helped Dom secure a job as a bartender in the South Loop, and soon he’ll be able to commit to organizing political and social movements around the city, one thing he couldn’t do when he was housing insecure.

“Learning has definitely been my refuge in adversity, and it’s helped me escape poverty,” Dom said. “It will always be my saving grace. It’s given me a good start in learning about social movements and learning about those who came before me to combat injustice. I’m trying to make the world a better place.”