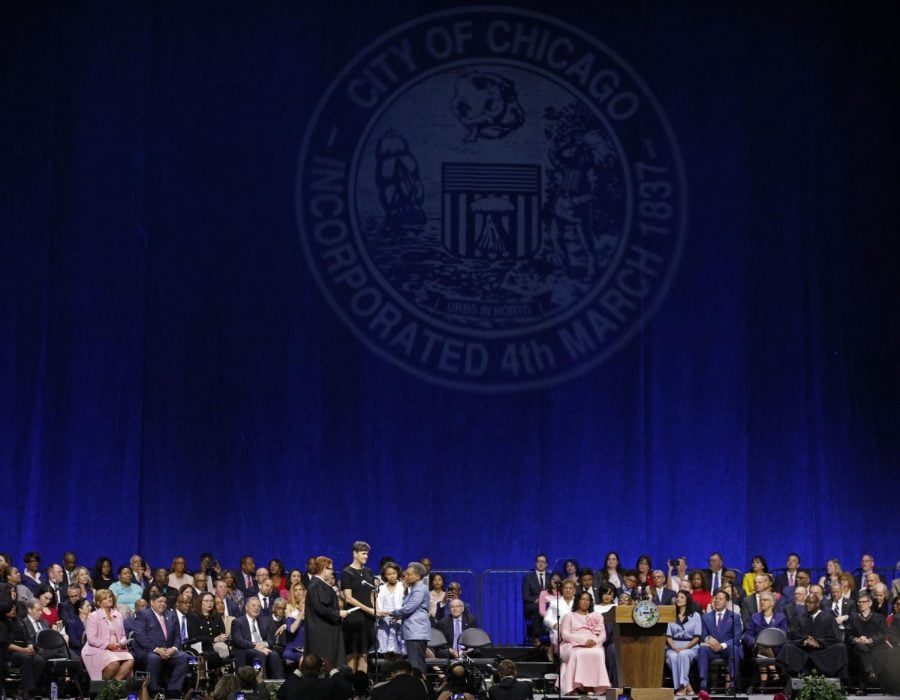 Lori Lightfoot, the first openly gay African-American woman to be elected mayor of Chicago, won a sweeping mandate of 73.7% of the vote. Lightfoot gained public support form public attorneys, the former Chicago Public Schools board president, and numerous co-runners who lost the first round. Lightfoot even found strong support in 7 of 17 predominantly white wards, a hopeful sign of racial easing in a city sorely beset by divides.

Even though she has found widespread electoral support with her vision, she may fail to bring tactical solutions to a city that desperately needs it. Lightfoot ran on a platform of total city overhaul: creating federal economic Opportunity Zones to bolster distressed communities; tax reworks; giving wider aid for mental health; and giving more of the budget to schools, environmental issues, housing and arts. Lightfoot hopes to tackle issues as colossal as city transportation, attempting to integrate ride-hailing apps into the plan.

Some of her policies are clever solutions. Federal economic opportunity zones would bring benefit to communities at very low cost to the city itself. But she suffers from two major problems: vagueness in policy and an electorate that may lose faith in a candidate not solving their own issues. Her focus is primarily on African-American communities, especially on the South and West Side. But she was elected with a strong mandate from all races and creeds. She is caught between a rock and a hard place: she must help all marginalized groups, but if she attempts to, she will most likely attempt to solve too much at once.

The mayor hopes to solve problems that are geared disproprotionately toward a small sector of the electorate and focus growth primarily on the South and West sides. Once the costs associated with her solutions become felt by neighborhoods which will not benefit, her popularity will begin to wane. Although voters realized that issues are disproportionately affecting these communities, the electorate fell in love with her progressive platitudes, not her tax hikes and business stratagem which are sure to follow.

Simply put, the electorate doesn’t have the stomach to swallow the results of the reforms Lightfoot needs to pass.

Indeed, though revolutionary in scope, her policies fall back on the same trite tactics with dubious effects: higher taxes on business and a greater commitment to a progressive vision, while being crushed under the weight of reality (and debt). In an effort to rightfully expand the scope of progressivism, Lightfoot risks being swallowed by the reality of the city’s problems. And her past, for some, brings more fears than reasurances.

“Lori’s past on the Chicago Police Disciplinary Task Force shows a woman who cares more about the politics of a situation than actual justice,” said DePaul Marketing Club President Adolfo Castrejon.

In an ostensible attempt to crack down on racialization in the police, she fired 72% of all officers who were brought under her purview of review. Because of law enforcement policies, Chicago patron Chance the Rapper endorsed candidate Toni Periwinkle, whom he believed to have a stronger history in genuine justice reform.

“[She has] fired a huge amount of policemen just because she wanted to build clout,” said Castrejon.

Clout, in this case, popularity at large, is an easy thing to farm among supporters when tensions about racial justice are at fever pitch. According to pundits, Lightfoot inflamed tensions in this matter in order to become well-known.

But what’s worse than anything else, Lightfoot says, is that Chicago has lost its allure. It is ignored by corporations; millennials hoping to start families have no choice but to leave. It is once again a city in decay. It is similar to the 1970s and ’80s, when Chicago transitioned from a city heavily reliant on industry and manufacturing to a city reliant on finance, healthcare and other services.

Now, Chicago needs to evolve yet again, from a general service economy without definitive focus. Specialization in tech is San Francisco’s draw; Finance for New York; Political organizations for D.C.; and entertainment for Los Angeles. But Chicago does not distinguish itself in the modern economy.

Rachael Mizuno, Next Generation Leader at the Chicago Council on Global Affairs, held an open-letter writing forum to Lightfoot just last week. Her organization hopes that Chicago can become a center-of-the-nation business hub with a strong international focus. But everyone has a different notion of what progress is; everyone expects Lightfoot to adhere to that path.

“We hope that Lightfoot can put Chicago back on the pedestal for both business and culture,” Mizuno said at the meeting. Such letter campaigns were common among the entire city: from community organizers on the South Side to mosques and churches to businesses and hedge funds. Divisions among the electorate’s goals are already showing.

Some have drawn parallels between the challenges Lightfoot faces and the challenges mid-’80s Mayor Harold Washington faced. Both were populist reformists, both were incredibly popular with minority voters and both vowed similar goals: to reduce population flight from Chicago, to grant more power to citizens, to modernize the city and to mend strong racial divisions.

The issues Washington faced were actually remarkably similar to Lightfoot’s. The city, struggling with the end of its industrial livelihood, was struggling to find footing in a modern economy. Hopefully Lightfoot can do the same for Chicago in the modern age.

Washington won the “Council Wars” against the recalcitrant alderman when federal courts declared the wards of Chicago to be illegally gerrymandered. Washington, successful in some policies, is remembered for sparking life back into the city.

Lightfoot’s initial concern in office may well be rebellious aldermen. Already, she is butting heads with colleagues such as Alderman Ray Lopez (15th), who claims that her solutions are too general to work in the different constituencies. Lightfoot’s goal was to remove the 50 aldermen’s supreme power over a variety of decisions, such as who gets sidewalk or liquor license permits. Some Aldermen have been accused of cronyism, the practice of only granting such permits to political allies and friends. Thus, Lightfoots breaking-in of the Aldermen is actually a needed step in moving the city forward, wherever that may be.

It has been alleged that aldermen unfairly utilize their jurisdiction to corruptly support leal followers. Lightfoot has since signed her first executive order, a decree that gives city departments — not the aldermen — the decision of administrative decisions. Such reform streamlines the process of governance but treads on Lightfoot’s principle of governance for the many. She is simply replacing aldermanic power with that of mayoral committee.

Michele Smith, leader of Chicago’s 43rd ward (Lincoln Park), supports Lightfoot’s reformist stance. “I believe it is necessary that aldermen comply with basic administrative and legal standards,” she said. “This ensures better government for everyone.”

Regardless of power struggles with the aldermen or making businesses pay their fair share, the mayor’s most pressing threat is the dire economic straits of the city. Last year, the city very nearly declared bankruptcy, and pensions continue to be a nightmare problem for politicians, unsolvable except by miracle.

With a budget shortfall of $252 million, a spike in pension contributions of $276 million, and a move away from borrowing debt to pay off debt, Lightfoot’s struggle against the weight of the situation may be determined before it even begins. One cannot bring business into the city, collect more tax revenue, balance a $500 million deficit without debt borrowing, and still make everyone happy.

“[Possible bankruptcy] of the city’s pension fund is terrifying,” said Caroline Fontazza, longtime city public water works manager. “There are hard workers who deserve to retire, but now there’s nothing in the budget for it? Lightfoot has a great record of helping public employees. I hope she can help us.”

Over the first few days in her new position, Mayor Lightfoot has truly made some radical decisions. She has removed the entire Chicago School Board, she passed the aforementioned executive decree centralizing authority and she took the fight to individual aldermen.

If she can keep this momentum up, tackling bankruptcy, business practices, demographics, racial issues, high taxes, an inflated housing market, and who knows what else, she may truly be all that she promised us. Perhaps someone with vision and power is needed to guide Chicago through its issues. If Lightfoot can overcome the seemingly insurmountable scale and scope of the city’s issues, she may very well guide the Third Coast into a bright new age.