Out on the loop: the best seat in the house 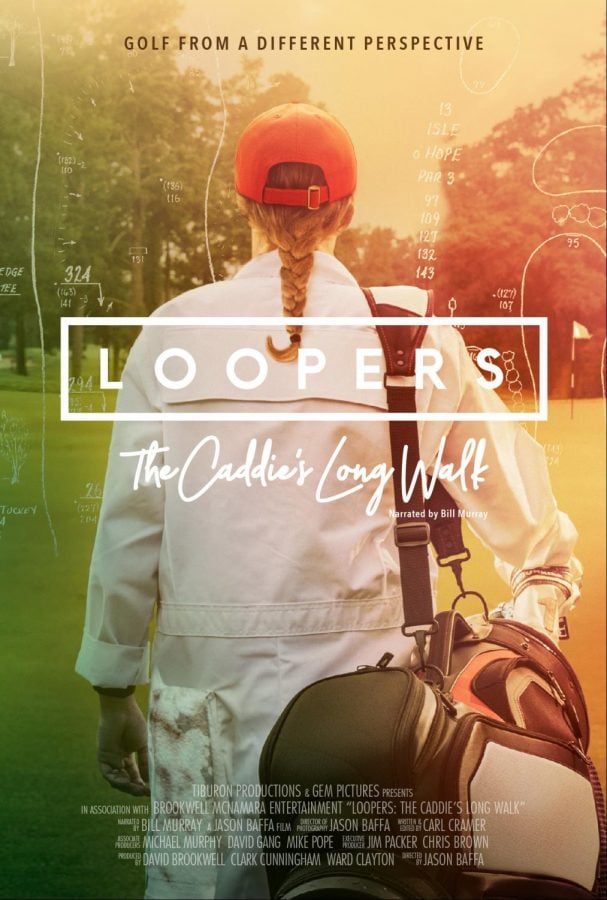 A cover poster for the upcoming documentary Loopers, a history of caddying in golf.

Golf is often considered to be a solo pursuit, and for most of us, it is. There is nobody around to pick up the slack when you forget your A-game back at the car. The simple, yet excruciating task of getting the ball in the hole with as few shots as possible falls on the golfer and the golfer alone.

But while golf may be a lonesome game, it’s the only common sport that allows the athlete to bring an assistant onto the field of play — a caddy. Often see in a jumpsuit or a bib carrying their players clubs, the story of the caddy is a fundamental part of the the history of golf. The caddy, or “looper,” as they are often called, has been at the center of many of the game’s greatest moments, but rarely do they find a moment in the limelight.

“Loopers: The Caddy’s Long Walk,” a new documentary set to release in select theatres on June 7, attempts to tell that story. Directed by Jason Baffa and narrated by the celebrated actor and golf ambassador Bill Murray, “Loopers” takes its viewers on a journey from the game’s disputed origins in Scotland to the high-profile caddy-player relationships in the modern game, reframing our perception of golf to that of a caddy.

“Caddies were an unruly bunch,” golf historian Roger McStavick said. “They were unkempt, frequently drunk, more curse words than any other words in a sentence. They were from the lower classes.”

The film does a good job of building up the cliche image of a caddy — a drunken fool or a teenager that’s supposed to “show up, keep up and shut up.” A tipped laborer for golfers too wealthy to carry their own clubs. Even if your only exposure to golf is catching 30 minutes of “Caddy Shack” or “Happy Gilmore” on cable, it’s an image we’ve all been acquainted with. What Baffa and his team do even better is show us why that view is so flawed.

Baffa and his team expertly avoid focusing too heavily on the professional game, and give a positive, amature face to the job. In the opening scene, we follow Teddy Julian, a middle-age man and third generation caddy at Ballybunion Golf Club in Ballybunion, Ireland. He doesn’t carry a bag for professionals, in fact, he’s probably a better golfer than most of the people he works for. But Julian prides himself on being an essential part of the experience for any golfer that crosses his path.

One of the great divides between American and European golf is the golf cart — you can probably guess which continent prefers the cart. In Europe, particularly Scotland and Ireland, your choices are to carry your own bag or hire a caddy. For pureist, golf is a game designed for walking. But even if you’re up to the task of lugging your own golf bag around 18 holes, it can be easy for an American golfer to get lost out in the dunes of a European links golf course.

“To acquire a local caddy at a foreign golf course is to have an ally in the battle against the elements, the golf course and life itself,” Bill Murray says in the film.

Links golf courses are built on dunes of sand, which, in the case of many of Scotland and Ireland’s most famous tracks, have been in place for hundreds of years. If you’re not use to the course, even the most highly skilled player can get chewed up and spit out without the right guidance.

The film bounces back and forth between exploring the caddy in the amature game and professional game. On the professional end, the message is simple: the legends you admire are nothing without their bag man.

Much of the discussion about professional caddies concerns the famed Augusta National Golf Club, the site of the annual Masters Tournament (a holy weekend for golf fanatics), where the local caddies, a group of poor, black kids from the neighborhoods surrounding Augusta National, became some of the most prized assets in golf.

When Fuzzy Zoeller won the 1979 Masters in his first ever appearance, he had a young man named Jeriah “Jerry” Beard on the bag.

“[Beard] told me where to hit it, where not to hit it — I was like a blind man with a seeing eye dog,” Zoeller said. “He led me around that golf course.”

No matter how big of a star you were in the game of golf, Augusta National golf club forced players competing in the Masters to use one of the club’s own caddies. For many of the games top players, they became integral to their success. It was those young, black caddies from poor neighborhoods that turned legends like Arnold Palmer, Jack Nicklaus and Ben Crenshaw into champions that would inspire generations of players to come.

“It shows front and center how much of a team game golf is now,” ESPN contributor and former PGA Tour caddie Michael Collins said. “The guys who think that caddies are there to show up, keep up and shut up — they don’t win. And they stopped winning a long time ago.”