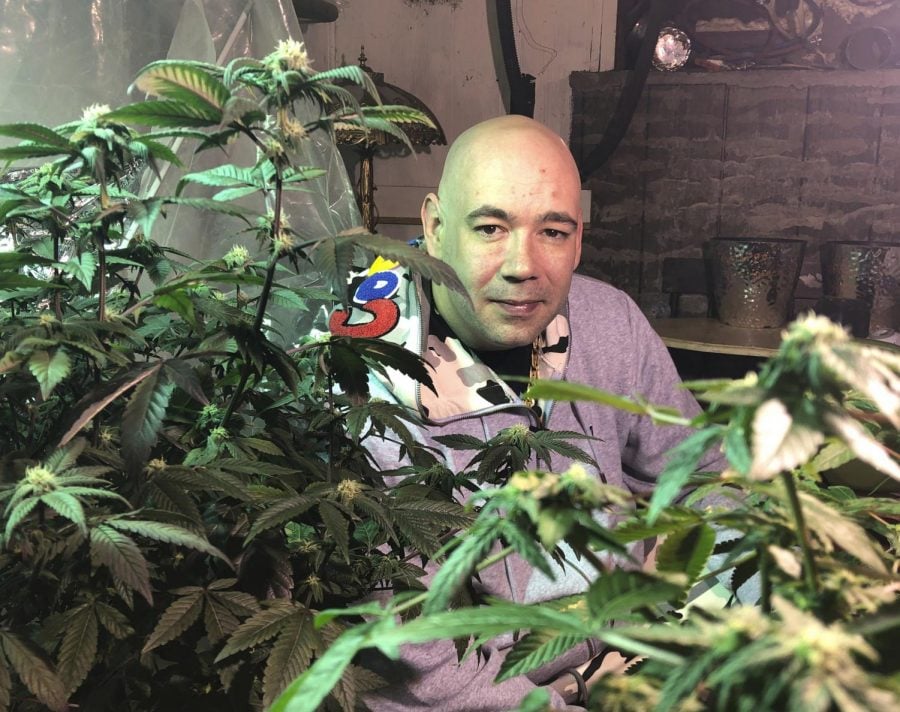 In this April 8, 2019 photo, Bernie Barriere poses for a photo as he tends to two marijuana plants he legally grows in a basement in Bennington, Vt. "Home grow" laws vary from state to state, with Vermont allowing adults to grow up to two mature plants. Neighboring New York does not allow home grow. "You get to pick and choose your own ingredients," Barriere said after watering two plants glinting under grow lights. "You get to be in control. You get to craft some amazing flower."

SPRINGFIELD, Ill. (AP) — Illinois lawmakers working to legalize recreational marijuana hit a snag that other states have wrestled with: whether to allow people to grow a few pot plants for personal use.

The 10 states that have legalized recreational marijuana have different “home grow” rules, with Michigan allowing individuals to grow as many as 12 plants and Washington state not allowing them to grow any.

The question in Illinois was settled Wednesday night when the Senate approved recreational use of marijuana after universal home cultivation of the plant was replaced by a provision allowing only medical-marijuana patients to grow their own.

The differences in home grow regulations reflect how states view the competing arguments about home cultivation: Opponents say it fuels the black market sale of the drug while proponents argue that if businesses can sell it, they should be able to grow it.

“We don’t say anywhere in this country that people aren’t allowed to have a small craft brew at their house if they want to, and I think the same rules should apply here,” said Kris Krane, president the Phoenix-based cannabis business 4Front Ventures.

Legalization legislation from two Chicago Democrats — state Sen. Heather Steans and state Rep. Kelly Cassidy — got off to a much better start this year than in the past because of the November election of Democratic Gov. J.B. Pritzker, who campaigned on legalizing recreational marijuana.

But pushback over policing homegrown pot forced Steans to jettison her original plan allowing cultivation for personal use before Wednesday’s Senate OK. Now, only the state’s 65,000 medical-marijuana patients would be allowed to grow at home. The measure needs House approval by Friday’s scheduled adjournment and Pritzker’s signature before Illinois would become the 11th state to allow recreational pot use.

Steve Stelter, who heads the Illinois Association of Chiefs of Police, said law enforcement would be hard-pressed to monitor compliance in people’s homes.

“We’re not going to walk up to a house and peek in the windows everywhere. How are we going to know?” asked Stelter, who heads the police force in the Chicago suburb of Westchester.

The home grow issue is often overshadowed by other aspects of legalization, such as who gets lucrative dispensary licenses and what should be done about people’s past pot-related convictions. But the issue resonates with users looking to save money and to take charge of what they put in their body.

In Vermont, Bernie Barriere is allowed to tend to two mature plants in a Bennington basement. He said he can grow higher quality and less expensive cannabis for his health and wellness than he can buy.

“You get to pick and choose your own ingredients,” Barriere said recently while watering the plants. “You get to be in control. You get to craft some amazing flower.”

There is little dispute that illicit markets have been an issue in states with legal pot, with much of the supply shipped to other states where it is still illegal to sell. People disagree, though, on the role of homegrown marijuana in illegal markets.

“They’re not contributing substantially to the illicit market. They may be yielding a few ounces per growth cycle, so that would be a few ounces every three to four months, and they may be sharing some of that yield with their friends,” said John Kagia, chief knowledge officer for the cannabis market research and data analysis firm New Frontier Data.

George Brauchler, district attorney for Denver’s southern and eastern suburbs, made that argument during a recent news conference announcing the seizure of more than 80,000 plants during raids of 247 area homes and eight businesses. He said Colorado is becoming “the Wild West of weed.”

Drug Enforcement Agency records show it was involved in more than 80 residential seizures during the first four months of this year in Colorado, with most of them involving hundreds of plants. The annual seizure numbers are significantly higher than before Colorado’s legalization.

State law allows up to 12 marijuana plants per residence for personal use.

In Illinois, Steans’ amendment would allow home grow only for patients eligible to use marijuana to relieve pain or other symptoms of debilitating illnesses, which they’re not allowed to do under the state’s six-year-old medical marijuana law. It would limit cultivation to five plants per household, regardless of the number of eligible patients living there.

She acknowledged that the change is a concession to law enforcement in order to win approval for the measure, but she noted that many lawmakers have concerns about product safety, as well as illegal sales.

“One of the reasons we’re going to tax-and-regulate is to make sure you’re not getting product that’s got issues,” Steans said. “By limiting that (home grow) significantly, you reduce the problems.”

The same home grow dynamics could play out in New York next month if legalization supporters can recapture momentum on what appears to be a stalled proposal there.

A legalization proposal this year from Gov. Andrew Cuomo would limit home cultivation to medical marijuana users and designated caregivers, who would be allowed up to four plants. Competing legislation from key lawmakers would allow adults to grow up to six plants per residence, a limit in line with legal states like California and Massachusetts.

Either proposal could help Britta Kuo, a medical marijuana user from Schenectady, New York, who regularly buys a $150 tincture with a high level of CBD, a marijuana and hemp derivative that doesn’t cause a high, to help alleviate the effects of her brain cancer and resulting epilepsy. She said it’s a high price for a five- to 10-day supply and she wants to home grow, as it’s important for her to have control over what she’s consuming.

“It’s way too expensive for me to go get something that’s essential for me to feel good throughout my cancer and my epilepsy,” Kuo said.