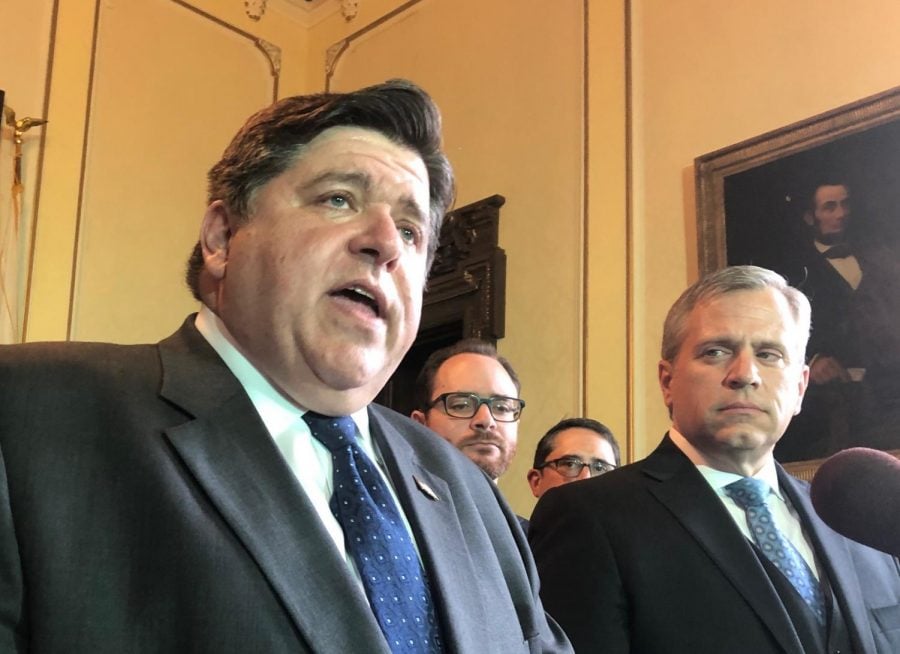 Democratic Gov. J.B. Pritzker, left, discusses the House action to put a constitutional amendment to implement Pritzker's graduated income tax on the November 2020 ballot in Springfield, Ill., Monday, May 27, 2019. Voters decide whether to eliminate Illinois' flat-rate tax system which critics claim is regressive. Rep. Robert Marwick, D-Chicago, the sponsor of the amendment which underwent nearly 3 ½ hours of debate on the House floor, looks on.

The Illinois House has sent Democratic Gov. J.B. Pritzker another victory by voting to legalize recreational marijuana use.

The 66-47 tally Friday would allow those 21 and older to buy marijuana at licensed dispensaries beginning next year. Residents could possess up to one ounce (30 grams) and non-residents could have 15 grams.

Pritzker called for legalization in his campaign for governor. He has pledged to sign the law.

Rep. Kelly Cassidy’s measure also includes opportunities for past convictions for possession of 30 grams or less to be cleared. The Chicago Democrat says “it is time to hi the ‘reset’ button on the War on Drugs.”

Private property owners could restrict use. Landlords could ban marijuana on their property. And employers would still be allowed to maintain “zero tolerance” policies toward marijuana use and the workplace.

Friday is not the last day of spring legislative session for the Illinois House. With major issues to tackle and a midnight deadline looming, House leaders have announced the chamber will be working at least through Sunday.

Lawmakers face a midnight deadline to approve a budget, a massive state construction plan, patch together a plan to legalize sports betting, perhaps combined with a large-scale expansion of casino gambling, and consider statutory protections for abortion.

Passage of legislation after May 31 requires three-fifths majority votes in each chamber for approval. But Democrats control both the House and Senate with supermajorities.