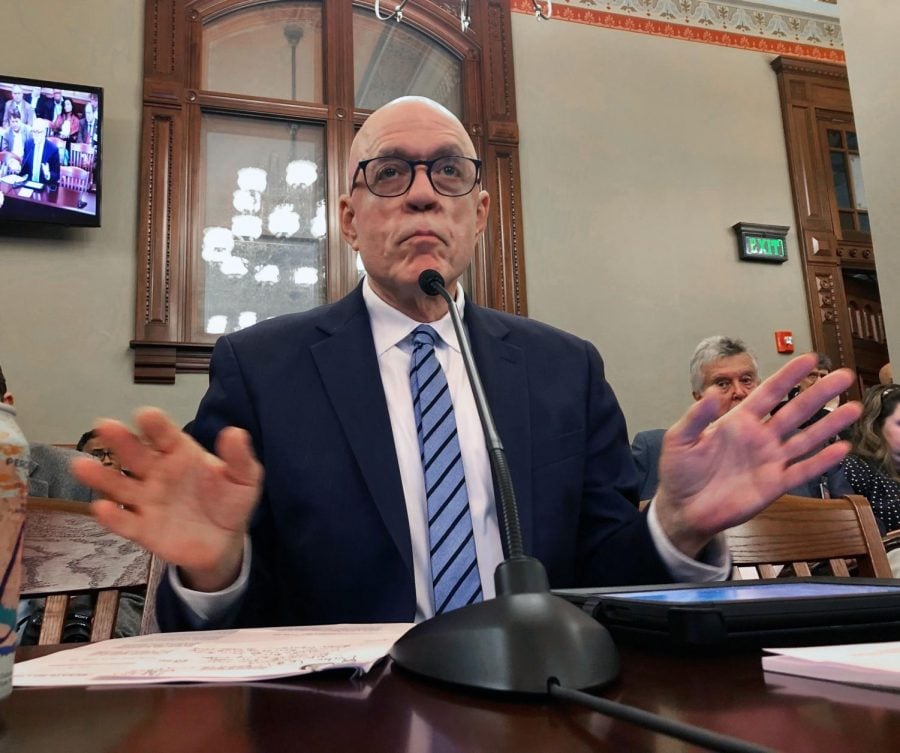 Illinois House Majority Leader Greg Harris, D-Chicago, outlines a $39.9 billion state budget plan to the Executive Committee, Saturday, June 1, 2019 in Springfield, Ill. Lawmakers missed the Friday, May 31, 2019 deadline to adjourn their spring session after a week of landmark votes including approving a constitutional amendment question asking voters whether to switch to a graduated income-tax structure that hits the wealthy harder and sending to the governor statutory language to protect abortion rights after several Republican-led states have imposed steep restrictions on the procedure.

SPRINGFIELD, Ill. (AP) — The Illinois House cranked out mountains of legislation Saturday in an overtime workday, producing a $39.9 billion budget, a $45 billion state construction program, and billions of dollars in new taxes and fees to fund it, from a doubled gasoline tax to a leviathan expansion of gambling.

Democrats, who control every facet of state government, led the way with cooperation from minority Republicans, who acknowledged the budget is balanced, were gratified to get business-building and job-creation incentives and recognized the need to pay for fixing roads, schools, prisons and other public works ignored for years.

“This state is uniquely situated in our country,” GOP Rep. Tim Butler of Springfield said during debate over doubling the gasoline tax to 38 cents a gallon. “We are a leader in transportation, but our infrastructure is crumbling. We have to re-invest, people.”

Lawmakers blew the Friday deadline for adjourning their spring session, in part because of the hours of debate consumed by historic votes. They approved asking voters to decide in next year’s election whether to change the state Constitution to allow replacing a flat-rate income tax with a graduated one based on income. And Democratic Gov. J.B. Pritzker says he will sign a law to make Illinois the 11th state to legalize marijuana for recreational use.

The Senate must return to Springfield Sunday to finish action on the infrastructure-improvement legislation and to consider the gambling package. Here’s a rundown at final-days action:

House action Saturday nearly concludes work on a $39.9 billion spending plan for the budget year that begins July 1, a 2% increase over the current year. Republicans agree it’s balanced and it provides a $375 million increase to public education to fund the school-aid formula revamped two years ago, a 5% bump.

The plan includes increases for higher education, fully funds the required $9 billion pension contribution and allows borrowing $1.2 billion to pay down a lingering, $6.7 billion pile of overdue bills to save money on interest payments.

And it increases by $100 million funding for the Department of Children and Family Services. The agency is reeling from criticism over its inability to save three children in its care who have died this year.

It calls for a variety of new and increased taxes, such as doubling the gas tax to 38 cents per gallon and increasing vehicle registration fees by 50% to $150, lower than what Pritzker proposed. It increases the per-pack cigarette tax by $1 to $2.98.

It also cuts out potentially contentious taxes, such as a real-estate transfer tax increase, a $1-a-ride fee for ride-sharing services and a 7% tax on cable, satellite, and streaming video services. But it now counts on hundreds of millions of dollars in tax revenue from legalized sports betting and casino expansion.

A proposal to legalize sports betting emerged this spring after the U.S. Supreme Court OK’d it outside of Nevada. But the Illinois legislation languished until last week when Rep. Robert Rita, a Democrat from the Chicago suburb of Blue Island, tacked onto it a long-discussed expansion of existing casino gambling.

The House OK’d the package last night. It would legalize sports betting and allow for adding casinos in Chicago and its suburbs to the north and south, Rockford, Danville, and southern Illinois. It would expand gambling slots at the state’s 10 existing casinos and add them horse racing racks.

A preliminary estimate puts first-year licensing and tax revenue at more than $700 million. It would be the largest contributor to the construction program ‘s so-called vertical projects — buildings such as schools, prison, and sewage-treatment plants — as opposed to roads.

The Senate has yet to consider the gambling array.

The Legislature voted to send a constitutional amendmentto the November 2020 ballot asking voters whether they want to switch from a flat-rate income tax to one based on income. If approved, the new scaled approach would take effect in January 2021.

In separate action, Pritzker was sent legislation establishing the rates should the new system be enacted. They top out at 7.99% for the state’s wealthiest residents. Pritzker contends that 97% of taxpayers will pay no more than they do now because those earning less than $250,000 would pay, at most, the current 4.95% rate that applies to the flat tax.

Pritzker will get legislation to allow residents to buy and possess up to one ounce (30 grams) of marijuana for personal use. Pritzker is expected to sign the measure to make Illinois the 11th state, along with the District of Columbia, to allow recreational use.

Supporters say the new law also will remedy to past injustices to minorities who were disproportionately affected by the war on drugs. The plan allows scrubbing of criminal records for anyone convicted of possessing 30 grams of marijuana or less and offers incentives to minority investors who want to enter what will likely be a burgeoning new marijuana industry.

After at least a half-dozen Republican-controlled states have adopted steep restrictions on abortion , Illinois Democrats have answered with legislation to provide statutory protections for the procedure. The House adopted the legislation which rescinds prohibitions on some late-term abortions and 45-year-old restrictions such as criminal charges against doctors who perform abortions, none of which has been enforced because of court orders.