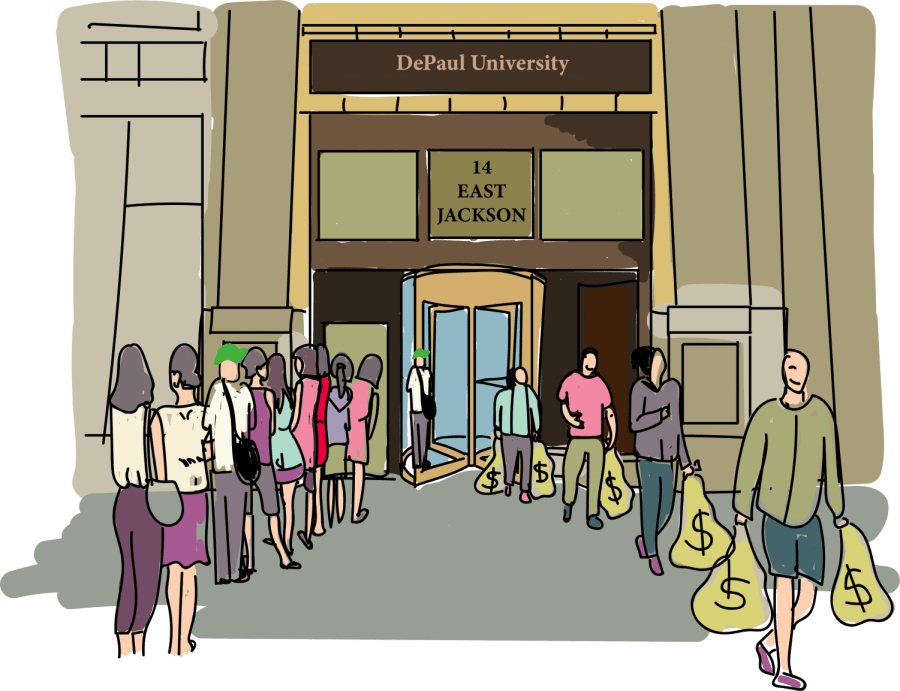 June 3 marks the beginning of Week 10. DePaul students are turning in the last of their work for the quarter and the heat of finals can only be outdone by the allure of the summer months filled with sunshine, just at arms’ reach. Teachers, too, are wrapping up their work for the academic calendar, possibly preparing for summer classes or maybe even an upcoming vacation. But for some instructors, today carries more weight than just marking the winding down of the school year. For some, it’s the last day to decide if they will begin to wind down their careers and take the buyout that DePaul is offering them.

On March 8, all faculty and staff received an email from the university’s president, A. Gabriel Esteban, laying out the Early Retirement Incentive Program (ERIP).

“DePaul University is offering long-serving faculty and staff an incentivized early retirement program once again,” the email said. “The ERIP provides the flexibility to prioritize and invest in academic programs and initiatives, enabling us to deliver on the promise of our mission going forward. This is a completely voluntary program.”

The incentive for faculty to accept is that they will be paid double their 2018 gross wage this coming July. The incentive for DePaul staff — which includes anyone in support, professional or management capacities — is a payout for full 2019 vacation accrual. Both faculty and staff would also be paid full retiree medical benefits all at once if the buyout is taken. A total of two years of wages will be paid.

To be eligible for the program, faculty must be tenured, at least 62 years old and have 10 years of cumulative full-time service, according to Human Resources. The same criteria goes for staff, with the exception that instead of being tenured, they must be full-time.

Having committed three decades to DePaul, Bruce Evensen, professor and Journalism Graduate Program director, fit the bill for the offer. When he received a personalized packet in mid-March detailing how the plan would work for him, he realized it might be right for him. He began to weigh his options as deeply as he could, given the time constraint, and ultimately decided to take the proposition.

“It was a difficult decision to leave full-time employment at DePaul University after 30 years,” Evensen said. “The Early Retirement Program gave qualifying faculty and staff 45 days to gather information and make a decision. It was a big decision for many of us. You don’t leave something that has been a source of pride and joy across three decades without a great deal of soul-searching.”

The first university-wide ERIP was offered in Spring 2014. In his letter, Esteban explained that the ERIP was one of the recommendations brought forward from the Strategic Resource Allocation Committee “as a positive action to help the university further its Catholic, Vincentian mission and achieve our budget goals.” The SRAC is made up of nine members appointed by the president each year, and chaired by the executive vice president, who right now is Jeffrey Bethke. In 2018, Bethke was a recipient of the Chicago chapter of Financial Executives Internationals’ CFO of the year. He was lauded by the award-givers for his brokering of the partnerships that helped produce Wintrust Arena, a process that The DePaulia investigated for possible nepotism and was criticized by others for its use of TIF dollars.

A press release posted by the school on March 8, the same day Esteban’s email was sent out, reports that the SRAC unanimously recommended a budget of $583 million to the Board of Trustees, who approved it.

“Under the 2019-20 budget, DePaul will continue to invest in employees,” the announcement said.

Vice President of Human Resources Stephanie Smith declined to comment on how the buyouts will be paid for.

Smith said that because the number of participants won’t be finalized until June 10, it isn’t yet known how much money the university will save or which departments will be most affected.

The offer was extended to all faculty and staff, with the exception of those in the School for New Learning (SNL), which is currently restructuring and offering buyouts as well.

In his letter, Esteban wrote that in March and April, Human Resources would hold information sessions to clear up confusion surrounding the details of health benefits, the retirement plan offered to tax-exempt organizations and other financial considerations.

Evensen was pleased with how HR facilitated the ordeal.

“You can’t exaggerate how amazing DePaul’s Human Resources people have been during this process,” he said. “They’ve answered every question with consummate professionalism.  Retirement planning was new to many of us. We had to consider what retirement would mean to healthcare and other living expenses that DePaul has taken care of for so many years.”

Smith didn’t address inquiries regarding by whom the retiring faculty/staff would be replaced. However, Evensen is optimistic that his department will be in good hands.

“Happily, we’re in a place right now with so many highly qualified people taking on so many tasks supported by an unbelievable group of adjunct colleagues and staff that enables the journalism program to conduct a wide search and bring in the very best applicant,” Evensen said.

The human resource overview of the program states that “this voluntary incentive program will position the university to continue to focus on its mission of making an extraordinary education accessible to its students.”

Smith was not able to address who the faculty/staff would be replaced by, because the deadline for choosing to participate hadn’t occurred yet. According to a representative from the Office of Human Resources, individual departments will have to wait until all early retirees are finalized before they can then decide on if or how any potential positions vacated will be filled.

A final revocation deadline is set for June 10. After that, all participating faculty and staff will be effectively retired on June 30. Smith said that because the ERIP is a voluntary program, she cannot say how this will affect which educators will want to come to the university.