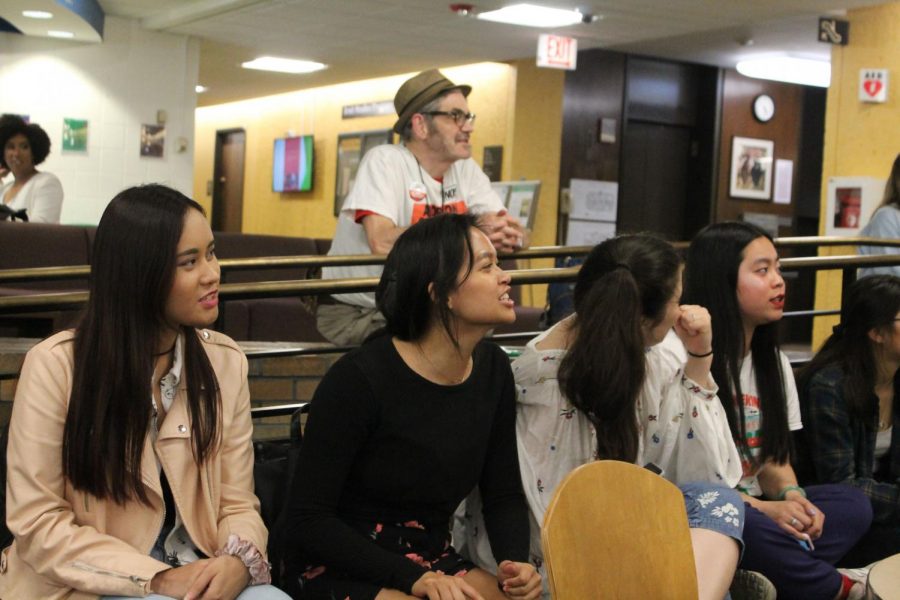 Students shout in agreement with many of the speakers on Wednesday that were talking about how reproductive justice is a human right and how many women are being hurt and damaged from the recent abortion bans.

DePaul student organizations took to the Schmitt Academic Center (SAC) pit on Wednesday, May 29 to show their support for reproductive rights. The event was in response to the recent and national abortion debate sparked by controversial and restrictive abortion laws in Alabama, Georgia, Louisiana and 6 other states. The laws began a national conversation on reproductive rights, sexual justice and Roe v. Wade, the landmark 1978 Supreme Court ruling that made abortion legal nationally.

The event was organized by Women’s March DePaul, DePaul Socialists, Advocates for Sexual Assault Prevention and Students for Reproductive Justice. Riley Reed, president of Women’s March DePaul, opened up the event by criticizing the abortion ban and other abortion and reproductive restrictions in other states. She also criticized DePaul’s lack of resources for contraceptives and other information and options for reproductive health on campus.

“We would hope to inform people on things they didn’t know before and give them resources of places to reach out to and find access to different things,” Reed said. “A lot of organizations that we have listed on our pamphlet, like Chicago Abortion Fund, not only provides funds for abortions to people that can afford them. It speaks to reproductive justice and just makes it more accessible for people. We also want people to know what DePaul stands for. They have not helped students at all in terms of reproductive justice and access to different reproductive needs.”

Some students attended the rally in opposition to the organizers and supporters. Alexander Duerst, a freshman environmental studies major, wanted to open up the discourse to both sides of the abortion debate.

“DePaul is not Planned Parenthood,” Duerst said. “They should not be offering free birth control. I feel that it’s great if someone hands out condoms. Condoms is where it should start […] The focus should be on education here. You’re in a city. There are so many resources available to you.”

The organizers of the rally provided resources for women and trans reproductive outlets that provide both the health care and information that students and community members might need. In terms of on-campus resources, Reed ended the rally with the reassurance that the DePaul Women’s Center provides resources and help for students in need. She reinforced the point that reproductive justice is aligned with healthcare and human rights, and DePaul should allow access to different health care options in regard to sexual health.