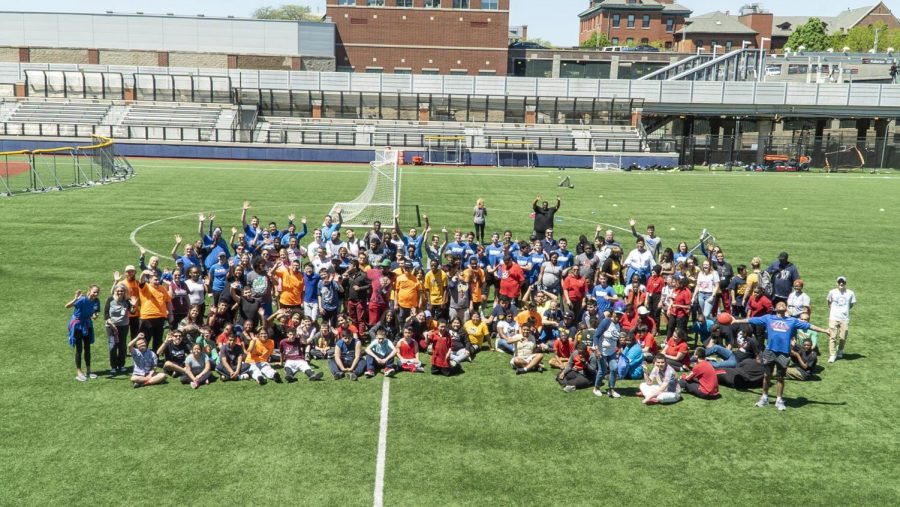 DePaul partnered with special olympics Chicago to host a sporting event known as "All-Sports day" at Wish Field on May 23.

For the second year in a row, DePaul’s athletic department partnered with Special Olympics Chicago (SOC) to host a sporting event with both Special Olympic athletes and DePaul athletes, known as “All-Sports Day,” at Wish Field on May 23. Repeated satisfaction by student athletes and staff for the event has encouraged organizers like Maggie Strus to increase turnout and frequency of the event next year.

Strus, assistant director of NCAA Compliance, had done volunteer work with the SOC since she was a child. Last year, alongside men’s soccer head coach Mark Plotkin, she was responsible for helping organize the first “All-Sports Day.”  She believes that the partnership between DePaul and the SOC and is beneficial to DePaul’s students and their athletes as it’s to the Special Olympic athletes.

“Volunteering for Special Olympics Chicago made me happy overall as a person,” Strus said. “I thought that the student athletes will be able to benefit from the interactions as well. It’s not something readily available to other people. And with the athletic department being so diverse, where people are from, different age groups and different life experiences that a lot of people would not have been exposed to something like this.”

Junior athlete of the women’s track team Rutendo Chimbaku was an example of this goal from the athletic department. From Zimbabwe, she expressed that she sought to volunteer to have a better grasp of the Special Olympic athletes, due to some views she saw as unfavorable from Zimbabwe.

“I come from Zimbabwe and the culture there is not very receptive to children with special needs,” she said. “Because I was never exposed to it, I saw it as a chance to expand my knowledge and see them do different sporting events. Because of the stigma back home, I wanted to see how these are kids who just want to play sports like what other people get the chance to do. It helped me realize that sports unite people. It doesn’t matter what it’s that you have going on.”

As a learning experience, not only was the diversity of the department highlighted, but Marie Zidek, DePaul head volleyball coach, stressed the importance for DePaul athletes to be aware of privilege and the lack of opportunities for others.

“We get gear, we get training,” Zidek said. “It’s important for our student-athletes to see that everyone can play sports, and everyone has a right in this country to fitness, wellness, movement and fun. Sometimes the Special Olympics groups, those athletes are underserved. It’s important for us to get out there and make sure we provide opportunities for the underserved population in our country. One of the major messages we tell our players is life is not just about you. It’s about what you can do to the person next to you to lift them up. In that regard, we had a chance to play sports with people who don’t necessarily always get the opportunity.”

“All-Sports Day” brought in 120 high school Special Olympians from Sullivan, Al Raby and Northside Learning Center because of the partnership between the athletic department and SOC. A total of 79 student athletes and staff turned out to volunteer for the event. Strus intends to involve more students from the academic side of the university and to encourage more involvement from Alpha Sigma Alpha.

“We have a lot of the student managers that work in the athletic departments are in sororities and fraternities,” she said. “I’ve reached to a few of them to try and learn what the philanthropy of what a lot of the organizations are. Alpha Sigma Alpha was able to come on board pretty last-minute, but their willingness to want to do it next year is what’s going to carry it through.”

Strus is confident and trusts the volunteers from DePaul’s student body in carrying out larger and more frequent “All-Sports Day” events, crediting the trust to the Vincentian values instilled by the university.

“I think a lot of the student-athletes here at DePaul are world class people and respectful people,” Strus said. “The commonality of the day and event itself is sports and that’s obviously something one thing our student athletes know the best. Their ability to gain an understanding of the people around them and the through process it takes to realize your environment is what is instilled in a lot of them. There was never a worry on how things will be handled.”

Originally held in the gymnasium last spring with middle school Special Olympic athletes and described by Strus as slightly cramped, the event at Wish Field took advantage of the turf and bases on the baseball field. Four activities were held for the high schoolers to rotate, including kickball, soccer, relay races and shot-put throws with bean bags.

“You hand them the bean bag and you cheer them on so they throw it as far as they can, encouraging them and making sure everyone was having a good time,” Chimbaku said. “We had kids throwing them over the fence. Everyone was jumping up and down. I recommend turning out for it. It’s a good time and you’re hanging out and meeting different people.”