Mexican officials try to stave off tariffs at White House 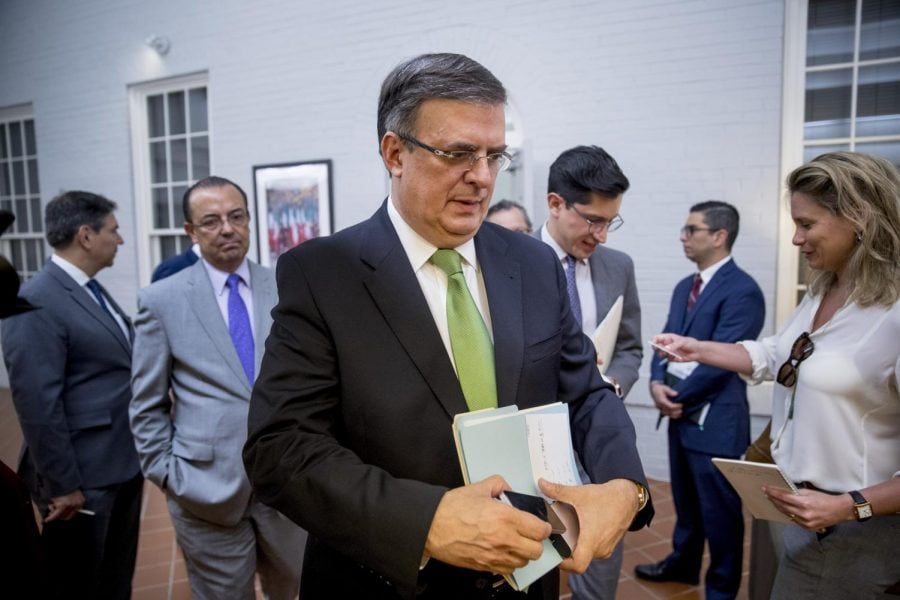 WASHINGTON (AP) — Mexican and U.S. officials met late into the day Tuesday at the White House trying to stave off President Donald Trump’s threatened tariffs on all Mexican goods flowing into the United States.

The first tariffs — 5% taxes on imports from Mexico — are to go into effect next Monday, and Trump has said that is “more likely” than not to occur despite stiff and vocal opposition from many fellow Republicans in Congress.

However, there were also hopeful comments earlier Wednesday, including from White House trade adviser Peter Navarro, who said on CNN that there were commitments Mexico could make to avoid the tariffs, which he said “may not have to go into effect precisely because we have the Mexicans’ attention.”

The tariffs carry enormous economic consequences for both countries, and politically they underscore a major ideological split between Trump and his party. Trump has increasingly relied on the import taxes as a bludgeon to try to force other nations to bend to his will, dismissing warnings, including from Republicans, about the likely impacts on American manufacturers and consumers .

Trump’s goal in this case is to persuade Mexican leaders to do more to keep would-be migrants from other Central American countries from traveling across Mexico to the American border.

The U.S. Border Patrol’s apprehensions of migrants at the border hit the highest level in more than a decade in May: 132,887 apprehensions, including a record 84,542 adults and children together, 36,838 single adults and 11,507 children traveling alone.

Most are from Guatemala, Honduras and El Salvador, countries wracked by gangs, violence and poverty. Many of the travelers are expected to eventually request asylum.

At one point Wednesday, White House officials downplayed expectations for the day’s meeting. But Mexican Foreign Minister Marcelo Ebrard, who was to meet with Vice President Mike Pence, Secretary of State Mike Pompeo and others, said Tuesday he thought tariffs could be avoided.

So did Republican Chuck Grassley of Iowa, chairman of the Senate Finance Committee, who said Wednesday the Mexicans had “a long list of things they’re going to offer to us, and it will preclude tariffs going into effect.”

Some U.S. lawmakers have been in talks with Mexican as well as Trump officials, hoping Mexico’s proposals could at least persuade the president to delay the first tariffs. Some Republicans were privately saying that Monday was simply too soon to start them.

Administration officials have said Mexico can prevent the tariffs by securing its southern border with Guatemala, cracking down on criminal smuggling organizations and entering into a “safe third country agreement” that would make it difficult for those who enter Mexico from other countries to claim asylum in the U.S.

The U.S., however, has not proposed any concrete benchmarks or metrics to assess whether the U.S. ally is sufficiently stemming the migrant flow from Central America. And it is unclear whether even those steps would be enough to satisfy Trump on illegal immigration, a signature issue of his presidency and one that he sees as crucial to his 2020 re-election campaign.

While some have suggested the president, who is currently traveling in Europe, is not serious about going through with his threat, he insisted in a tweet Tuesday that he was not “bluffing.”

Meanwhile, Republicans in Congress have been threatening a rare confrontation with Trump, warning the White House Tuesday that they are ready to stand up to the president to try to block his tariffs, which they worry would spike U.S. consumer costs, harm the economy and imperil a major pending U.S.-Mexico-Canada trade deal .

Senate Majority Leader Mitch McConnell said Tuesday with understatement, “There is not much support in my conference for tariffs, that’s for sure.”

“Deep concern and resistance,” is how Sen. Ted Cruz of Texas characterized the mood.

House Speaker Nancy Pelosi, a California Democrat, warned on Wednesday that the proposed tariffs, which could eventually rise to 25 percent, would be “punishing” for both the U.S. and Mexico.

Analysts were not optimistic that the initial phase of tariffs could be avoided.

“Trump has got his new tool and he wants to use it and he will use it, not just because he can. He will use it because it’s part of his negotiation tactics,” said Duncan Wood, director of the Mexico Institute at the Wilson Center think tank in Washington.

“Mexico will offer to do a lot more on migration, but they will also say that they will retaliate against tariffs and a lot of people are going to lose a lot of money,” he said.

Tony Wayne, a former U.S. ambassador to Mexico, said the two sides could have a good meeting and reach a deal, but still not satisfy the “wild card” president.

“The tweets have said ‘stop everybody’ and ‘stop drugs.’ That would be an impossible task to do in the near term,” he said.

The economic stakes are enormous. The 25-year-old North American Free Trade Agreement made trade with Mexico largely duty free. As a result, manufacturers have built up complicated supply chains that straddle the border. Americans bought $378 billion worth of Mexican imports last year, led by cars and auto parts. Mexico is America’s No. 2 export market behind Canada.

The back-and-forth could also imperil the NAFTA revamp, which Trump pressured Mexico and Canada to agree to last year. The U.S.-Mexico-Canada Agreement has been signed by all three countries but must be approved by their legislatures.

Trump, speaking to reporters in Ireland Wednesday, said he thinks Mexican officials “want to make a deal” and said he would know more after the meeting.

“Mexico can stop it. They have to stop it. Otherwise we just won’t be able to do business,” he said. “It’s a very simple thing.”