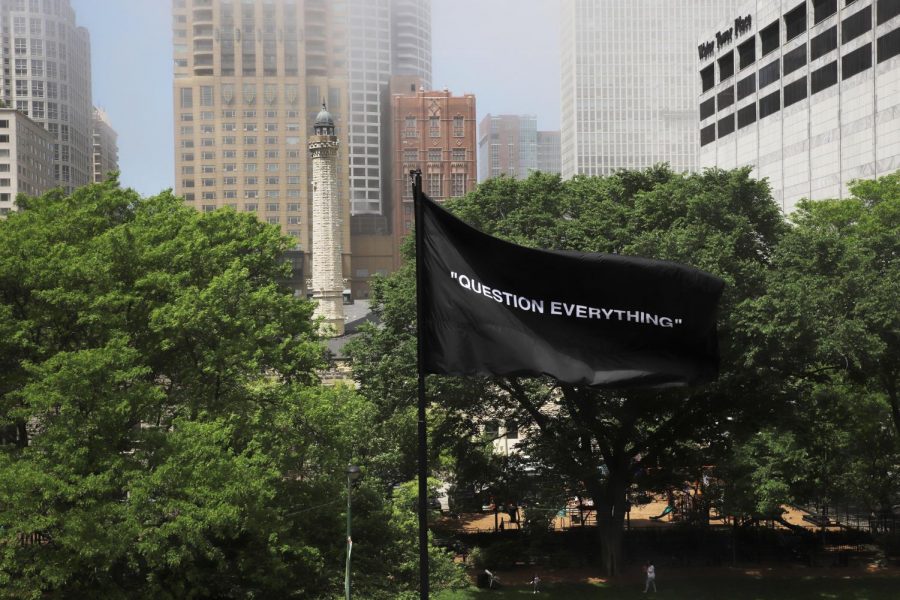 Next to the street in front of the Museum of Contemporary Art waves a black flag inscribed with the words, “Question Everything.”

A mile and a half south of City Hall, where Mayor Lori Lightfoot, the City Council and aldermen from the city’s various wards make decisions, “CITY HALL” is emblazoned in bold letters on the front windows of the Museum of Contemporary Art. Next to the street in front of it waves a black flag inscribed with the words, “Question Everything.” These monikers symbolize the open exchange of ideas and conversation, ultimately leading to the most innovative outcome.

This is all part of Virgil Abloh’s debut exhibition “Figures of Speech,” a thoughtful look at the wide variety of work he’s created over the course of his career, which encourages redefining one’s general understanding of common language and imagery.

Abloh is a dynamic artist, hard to pin down to any one medium — a creator in the greatest sense of the word. Succeeding in the fields of streetwear, high fashion, music, graphic design and architecture, Abloh has done the near unimaginable.

Originally from the western suburb of Rockford, he spent much of his childhood with his family on Chicago’s South Side. There, he began printing T-shirts and refining his sensibility as a designer. He eventually earned a master’s degree in architecture from the Illinois Institute of Technology, and by that time had crossed paths with then-emerging artist Kanye West and became the creative director for Donda, West’s creative firm in charge of merchandising, album covers and concert design.

After branching out on his own in 2013 with his high-end streetwear line “Off-White,” he continued to perform as a DJ across the globe and at festivals like Lollapalooza and Coachella.  More recently, he was named artistic director of menswear for Louis Vuitton.

“Figures of Speech” is broken into seven sections, each highlighting a different milestone in Abloh’s artistic journey thus far. From his early work in streetwear and music to his more somber look at fashion through the lens of the black cultural experience, he invites the public into each step of his creative process.

Dedicated to the youth of Chicago, Abloh aims to provide some sort of “cheat codes” to the young creative minds following in his footsteps. By doing seemingly impossible things as a young black man from the city, his work represents the deconstruction of barriers to success in often inaccessible fields.

Through his work, Abloh reaffirms his position as an innovative break from convention regarding both who and what are welcome in creative spaces.

Virgil Abloh’s “Figures of Speech” will be on display at the Museum of Contemporary Art until Sept. 22.