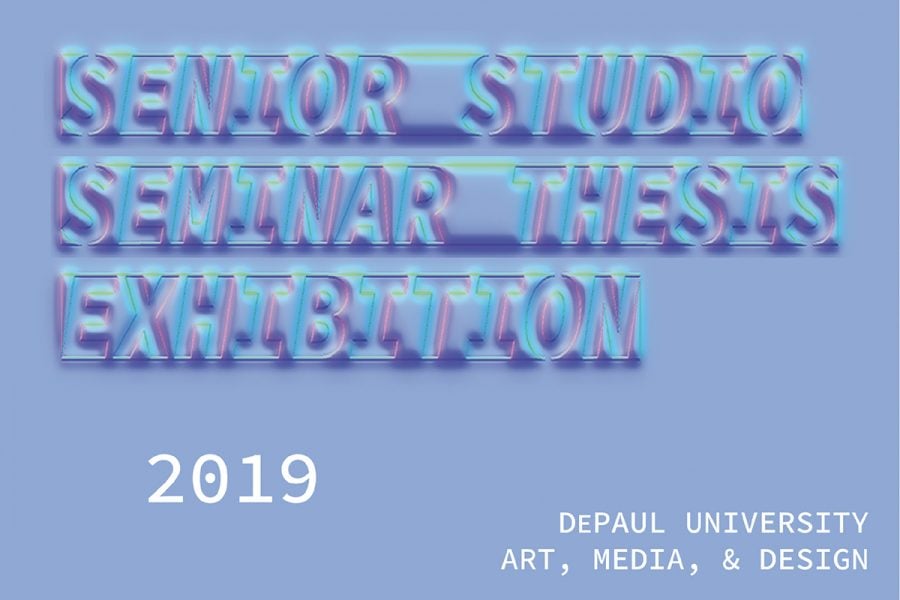 For the past 10 weeks, 15 especially creative DePaul students have been focused on one thing — their studio exhibition debut. As part of the Senior Studio Seminar, graduating Art, Media and Design students will display their work in an exhibition at the DePaul Art Museum over commencement weekend, marking their official entrance into the professional art world.

These artists began planning their final pieces around the middle of winter quarter, preparing for the realization of their concepts in the spring. This is the most advanced art class offered at DePaul, created by Art, Media and Design professor Bibiana Suarez created in 1994. In preparation, students craft a proposal for their thesis and construct timetables and budgets for their final projects.

“[Students] learn all the ways as an artist we have to plan and work to accomplish a goal with a particular project,” Suarez said.

As a young artist, this class marks the final step into beginning careers in art after graduation.

“It really is the test of if you can actually do this,” said Kacey Arnold, a graduating senior exhibiting her work in the show. “Can you actually handle the pressure, working on your own and not having someone over your shoulder making sure you’re doing things and doing them right?”

Many students infused their artwork with outside experiences and knowledge gained from their other classes at DePaul. Throughout the final quarter, Suarez assigns that each artist keep a journal every week. They track their progress as their concept is realized demonstrating in writing their own artistic process for their studio debut.

Importantly, said Suarez, it shows that “it’s a lot of planning and hard work, it’s not only skills and talent.”

Arnold started off as an anthropology major before switching to art and moving anthropology to her minor. Because of those experiences,  her final piece is “an abstraction of black female stereotypes, juxtaposing and adding complexity to that,” — what she deemed “a culmination of my anthropological brain and my art brain coming together.”

Ceargio Bagenda, another artist exhibiting his work, was inspired by his family’s immigration from Indonesia in 1999. Early on, he knew that he wanted to focus on immigration and settlement in his final piece and what resulted is a combination of art forms and styles to represent that.

“In Indonesian culture, there’s a lot of low-relief sculpture included in the artwork as well as traditional fabric and textile design art, so I wanted to incorporate some pictures of home into my design,” he said. “I decided to mix that with abstract modernism Western art to create the dialogue of the mixing of Western and Eastern cultures.”

Meanwhile, Hannah Mathis spent most of the beginning of the quarter experimenting with different concepts before she settled on her final product. Using charcoal and a small amount of paint, Mathis infused her interest in biology into her art and ended up abstracting the impressions of mushrooms and spores on three sheets of canvas.

“I feel like we’re all really well-rounded and we have a lot of knowledge in other subjects,” Mathis said. “we all have all of these other things that we pull into our art.”

After graduation, Arnold and Bagenda are joining a residency through the Chicago Artists Coalition that connects them with mentors and other graduates to learn how to maintain a professional practice post-graduation.

“I feel liberated graduating but I feel secure enough that my faculty has taught me well enough to pursue my own careers,” Bagenda said. “I’m really excited to make my stamp in the art world now.”

The Senior Studio Seminar Exhibition is on display until Sunday, June 16.