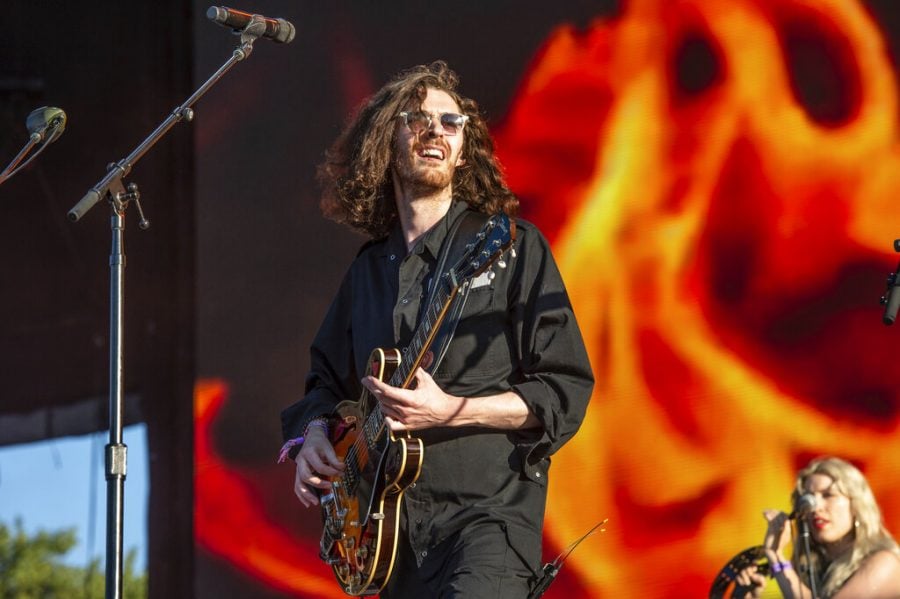 Hozier performs on day one of Lollapalooza in Grant Park on Thursday, Aug. 1, 2019, in Chicago.

The first day of Lollapalooza 2019 couldn’t have been more perfect—large but contained crowds, minimal issues with the artists’ performances and not a cloud in the sky. In fact, for a festival which is notorious for poor (though predictable) Midwestern weather, a better Day One is hard to imagine. Here were some of the day’s highlights.

One of the first sets of the day was YBN Cordae, a rapper from Suitland, Maryland and whose real name is Cordae Dunston. Two hours before his set started, people started to gather by the Bud Light stage. Unlike that of the T-Mobile stage, where most early crowds planned to stake out the grounds for later shows like Hozier and The Strokes, most people waiting by Bud Light said that they were there for Dunston’s show.

And, boy, did he deliver.

At 1 p.m., when his set began, his crowd reached halfway across the allotted space for the stage and was the most energetic of any show’s crowd before him, singing along to every word and dancing despite his earlier set time. Because Dunston performed while the weather still lingered in the mid-70’s, the audience happily bunched up together near the front of the stage, making moshing practically inevitable and a good time even more so.

During his set, he thanked his “La-La” crowd multiple times for attending, and made calls for rapper A$AP Rocky and notorious drug dealer El Chapo to be released. Near the end of his set, he hopped off the stage, and, surrounded by Lollapalooza staff, waded through the crowd.

Stella got her start as an actress on the hit show “Nashville,” where she starred alongside her sister Maisy as Maddie and Daphne Conrad, respectively. Her performance Thursday certainly tapped into those country roots. Her band seamlessly blended ethereal accompaniments with her country/indie-pop vocals as she switched between her own songs and renditions of other artists’ songs.

Among the covers she performed was Rihanna’s “Umbrella,” which, despite the slower pace she chose to take, still had the crowd singing along to the iconic refrain. She also performed some of her own music, like “Fortress,” from her first EP.

Stella’s crowd was a happy mix of just-arrived festival-goers who bopped around at the front and attendees who had been there since the gates opened, taking her more relaxed set as an opportunity to find a spot in the grass and listen while splayed out on the lawn.

If performers were social media, Zucker would undeniably be Tumblr; his soft rock instrumentation and post-teenage angst-ridden lyrics just scream it.

He opened his set by yelling out to the already-huge crowd at the American Eagle stage that he hadn’t known what to expect when he was asked to play Lollapalooza, but that he was ecstatic to see such a big group of fans that were excited to be there.

After playing some of his more well- known songs, he performed an unreleased song titled “Somebody Loves You.” His performance received the most boyband-like response of any concert of the day, and throughout his songs, high-pitched shrieks of excitement rose out of the crowd.

Fitz and the Tantrums

Before Michael Fitzpatrick and Noelle Scaggs of Fitz and the Tantrums took the stage, an electro-orchestral ballad blasted over the loudspeakers, drawing in the audience’s attention in—but not quite enough.

When the band took the stage and asked the crowd to sing along, it took a long time for their directives to be taken into action. Like, three songs. The crowd finally became engaged with the show when the group’s baritone saxophonist (also flautist, keyboardist, percussionist and guitarist), James King, ripped into his solo in one of the group’s defining songs, “Out of My League.”

From there, the crowd came alive and sang along as the group began playing more of their well-known tunes and fewer of their new songs.

Among the most fun, non-headlining sets of the day was Daigle’s. From the moment her band stepped onto the stage in pink, blue and green pastels, the crowd was on its feet, ready to enjoy her music.

Donning shimmering face jewels like any other Lolla-goer, Daigle drew inspiration from Carribbean, country and deep South soul music as she sang, with a voice most comparable to Adele, a mix of both her own songs, like “Still Rolling Stones” and other classics, including Aretha Franklin’s “Freedom” and Stevie Wonder’s “Sir Duke.”

A soulful and technically impressive solo by one of her backup singers had the crowd cheering and clapping long after the solo had actually ended, and the band — which was made up of two guitarists, drums, keyboard, trumpet, saxophone/flute and trombone — received just as much applause as the singer, who gleefully acknowledged every instrumentalist as they soloed throughout the set.

When Hozier walked out onto the T-Mobile stage and began singing, images of raging flames burst out behind him on the big screens. He finished the first song and addressed the crowd, acknowledging how excited he was to be in Chicago as the “majority of his influences come from here.” He added that Chicagoans should feel proud of their city’s history of protest.

After the flames subsided, historical and present day images and videos of protest took over the screens as Hozier serenaded the audience with his own protest song, “Nina Cried Power.”

He closed his set with the song that made him a name in the industry, “Take Me to Church,” and you could hear the crowd singing along from as far away as the Lake Shore stage across the lawn. His set featured a full band and a violinist.

The Strokes delivered a set that nearly perfectly matched the music they were playing. To stand in the jam-packed audience was to feel as if you’d been transported into the sound waves of the song itself, swaying along to the slower songs and jumping up and down to the faster ones.

With red and blue lights darting all around the T-Mobile grounds, the crowd was on its feet the whole time, singing along to the band that some said was the soundtrack to their high school and college years.

The crowd for the Chainsmokers, who started gaining traction with their 2015 single “Selfie” and solidified their name in the pop -realm with 2016 single “Closer,” was absolutely massive. Beginning at the front of the Bud Light stage and ending in the middle of Jackson St., it was nearly impossible to see the stage without sitting on the shoulders of a tall friend, which many audience members chose to do.

For “Closer,” the group brought Isaac Slade, lead singer in the band “The Fray,” on stage to fill in Halsey’s part.