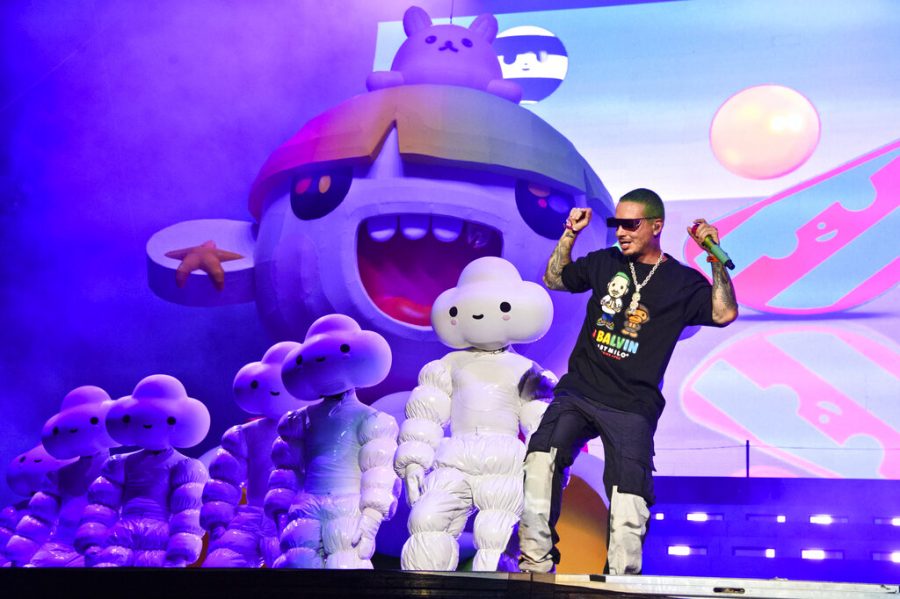 J Balvin performs on day three of Lollapalooza in Grant Park on Saturday, Aug. 3, 2019, in Chicago.

The day three Lollapalooza lineup may not have seemed all that exciting at first glance, but with the big names starting later in the day, lesser-known artists were given an opportunity to break through. Here were some of the day’s highlights.

Aaron Aye walked onto the Bud Light Dive Bar stage a complete unknown to many, but after a lively show that woke the crowd up from its early afternoon slump, he surely left it with more fans in tow.

Performing only original works, Aye managed to bring a tired crowd resting in the shade back into that heat to dance onstage with him— and no one seemed to mind a bit. In between rapping and singing, he glided across the stage, switching between various freestyle hip-hop moves and Michael Jackson’s classic moonwalk, who he later said in an interview was a huge inspiration to him.

The DePaulia was given the opportunity to interview Aye after his show. Look for our feature on him later this week.

In what was possibly the only blues-inspired performance of the weekend, Gary Clark Jr. delivered a show that kept a younger audience engaged with a style of music that some of their parents likely played in the car growing up in lieu of 96.3 Kiss FM (much to their chagrin).

By singing songs that the crowd could relate to — like “This Land,” which explores his relationship with being American and black — and blending hip-hop, blues and a little reggae, Clark managed to keep an old genre young.

Most of the crowd watched from the shade, but not because they were disinterested— it just was that kind of show. He closed it out with The Beatles’ “Come Together,” for which the whole crowd sang along.

Lil Wayne’s hype-man, DJ P. Lewis, shouted to the crowd at 6:45 p.m. on the dot: “Are you ready for the best rapper alive?” With a lead-on like that, the crowd had its hopes up high, and Lil Wayne made sure not disappoint by playing some of his biggest hits, including “A Milli” and “Bedrock.” He even played his remix of “Old Town Road,” which several artists chose to do in their own renditions, including Lil Skies and CRIZZLY.

As a Lolla artist with one of the longest standing careers, Lil Wane made sure to thank his crowd after almost every song, adding that he “ain’t [expletive] without” his fans.

The crowd reached back over the steps which led out of the festival’s south campus, and there were as many interesting blow-ups — teddy bears, lightsabers and a single llama — popping out of the sea of people as there were fans on their friends’ shoulders.

Tenacious D is Jack Black’s band, and their performance at the Bud Light stage was so Jack Black that it was almost unbelievable. Almost.

The band stars Black and longtime friend Kyle Gass, and to stand in the crowd and take in their performance was like having an absolutely crazy dream, waking up and writing it down instantly because you know it’ll be a good story.

Their background set was a castle with penis spires and a vagina entrance. Black rolled his R’s. Gass left the stage in a gimmick-like fight while Black fake-cried on stage. There was a man dressed like Nacho Libre and a pickle dressed like a man in the crowd.

I really don’t know what else I can say other than if you’ve seen any of Black’s discography, it was that — but real life.

The crowd for CRIZZLY, who performed at the Titos stage right after Tenacious D and before J Balvin, was not that big, but the show that frontman Christopher Lee Marshall put on Saturday night was just big enough to keep the energy from Tenacious D going until J Balvin took the stage 45 minutes later.

For those who can’t take the sweaty, intoxicated bodies writhing around at Perry’s but love electronic dance music and dancing in general, Marshall’s show was the place to be. A pit formed for moshing, but there was plenty of room on the outskirts to dance around with a group of friends without fearing losing them.

Marshall remixed top dance hits like “Whip My Hair,” “My Neck, My Back” and, yes, “Old Town Road.”

If you’d seen a Twenty One Pilots show before, this set was boring. If you hadn’t, it was probably still boring.

The group put on a very predictable concert: They sang their top hits, like “Blurryface” and “Stressed Out,” asked the crowd to sing along and invited them to turn on their cell phone flashlights to sway to the ballads.

There were no surprise artists, special tricks or flashy riffs. Perhaps if this had been a more intimate show for the band’s biggest fans, it would’ve been more successful. But for a Lollapalooza audience of thousands—not so much.

J Balvin made history Saturday as the first Latin artist to headline Lollapalooza, and he was ready for it. “I am so grateful to be right here,” he said. “This is our time, this is our moment. This is our time to make our dreams come true.” His crowd, which filled the whole Bud Light lawn and a little beyond, cheered loudly, with many fans sitting on the shoulders of friends and brandishing Latin flags.

Performing in front of a brightly colored set and a team of back-up dancers dressed like clouds, he started his set with “Reggaeton,” and its repetitive chorus invited non-spanish speakers to join in singing the refrain, even if they didn’t catch every line in the verses. Hips swayed back and forth all night long as the crowd of all ages enjoyed the welcome change from a typical Lollapalooza headlining act.