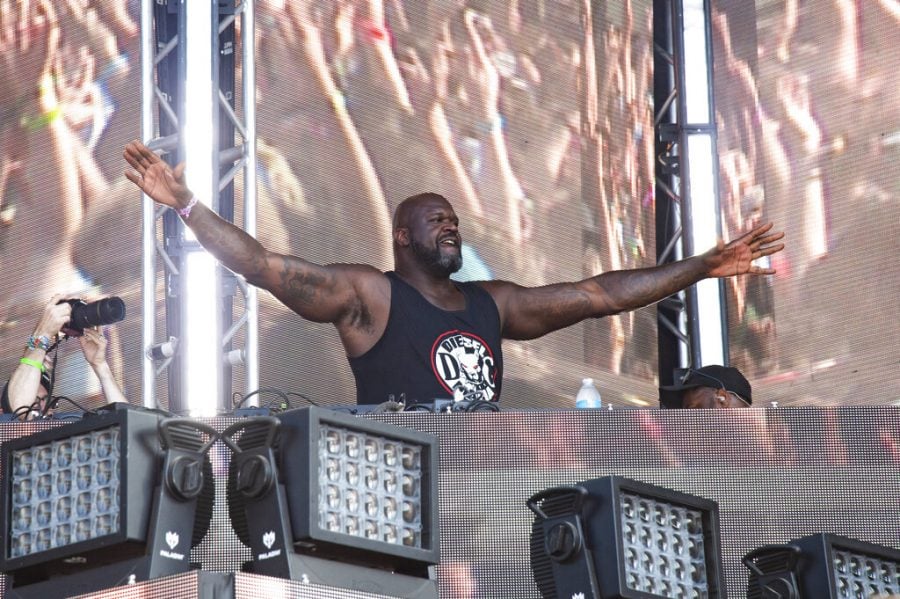 Shaquille O'Neal performs on day four of Lollapalooza in Grant Park on Sunday, Aug. 4, 2019, in Chicago.

And just like that, Lollapalooza 2019 is over. Here are some of the fourth day’s highlights.

When Virginia-born artist Just Loud took the Toyota Music Den stage, a small crowd of 30-to-40-somethings gathered around the stage. But when he broke into the first falsetto notes of his set the crowd only got bigger as he took on covers like “Creep” and originals like “You Got the Moves.”

With funk-inspired riffs and even funkier energy, the bright yellow tracksuit Just Loud donned while on stage perfectly set the mood. Crowd members caught on to the catchy tunes with repetitive refrains and sang along. Just Loud encouraged it, inviting them to sing the punchiest phrases into the microphone a few times.

During one of his original songs, titled “Soul Train,” he jumped into the crowd and started a soul train of his own with the audience of roughly 40 people­­—which for the Music Den’s space, was a lot.

JOJI, whose real name is George Miller, walked on stage Sunday in a fashion reminiscent of the SoundCloud rapper from your high school taking the stage at the annual talent show—but this crowd was much more excited than that.

Though it took him a while to get into the set, Miller had the crowd on its feet and engaged the whole time, giving off an almost nerdy vibe that shouted, “I can’t believe I’m here either.”

Filling the gaps in his set with humor, he shouted out to the crowd asking who among them has “demons” with which they deal. The whole crowd screamed. “That’s a lot of [expletive] illness out there,” he said. “Watch out for all that.”

The very minute DJ Diesel — aka Shaquille O’Neal, aka Shaq — began his set, people from all over the festival grounds began running toward Perry’s stage with their phones high above their heads, hoping to get a shot of the NBA legend (and now, DJ legend) up onstage.

His stage presence was like no other artist’s, given that his 7’1” height made it easy for the crowd to see him from the very back of the packed lawn. When the first beat dropped, fire and smoke shot out of the front of the stage into the air, and the crowd jumped even higher—but that wasn’t enough for Shaq. “I better see a [expletive] mosh pit,” he shouted to the rhythm of the songs. He added that if the mosh pit was worthy, he might join in.

The gravy train came to a screeching halt at Lollapalooza on Sunday when Yung Gravy, a rapper from Minnesota, brought a bit of break-the-rules fun to the festival. The crowd for Yung Gravy could hardly fit within the BMI stage limits—so much so that several people were climbing light poles in order to get a better look.

Gravy had to pause his set more than once because several people at the front of the overflowing group were being crushed by the raucous crowd. “I know that it’s negative that people are getting hurt, but it also means y’all are going crazy,” he said regarding the several crowd removals.

The crowd sang along as he closed the set with “Mr. Clean,” the song which uses sampling from the 1950s hit “Mr. Sandman” and landed him a name in the business, and he dove into the crowd—despite knowing full well it was against the rules.

The DePaulia had the opportunity to interview Yung Gravy before his set. Look for our feature on him later this week.

What Kacey Musgraves delivered Sunday evening was a palate cleanser of sorts, offering those who had been there all day an entirely new taste of music to take in. Some fans had been waiting all day for Musgraves, but the majority of the crowd showed up and spread out across the lawn, resting their feet from dancing around all day and their ears from the loud bass drops that made them dance in the first place.

Her acoustic twang with a still-driving beat kept the crowd engaged and singing along as she played some of her top hits like “Slow Burn” and “Space Cowboy.”

After a few songs, she took a moment to address the issue of gun control with the crowd, asking the audience to shout, “somebody [expletive] do something” with her and to hold their representatives accountable.

The crowd for Ariana Grande’s long-awaited set began building the moment the gates opened Sunday morning—and didn’t stop until the show had ended. She opened her show sitting at a long table with several backup dancers, posing like DaVinci’s painting of the Last Supper and garbed in modernized, Renaissance-like outfits.

She sang all her hits, but moved through them at a pace that was almost hard to keep up with and bantered with the crowd minimally, making the performance feel more like a recorded one than a live one.