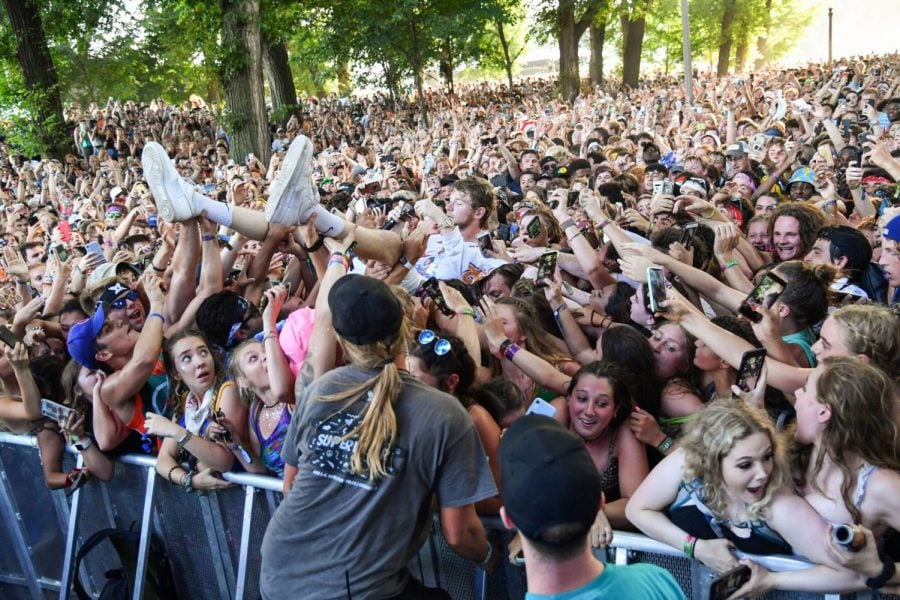 The gravy train came to a screeching halt at Lollapalooza on Sunday when Yung Gravy, a rapper from Minnesota whose real name is Matthew Hauri, brought a bit of break-the-rules fun to the festival. The crowd for Yung Gravy could hardly fit within the BMI stage limits—so much so that several people were climbing lamp posts in order to get a better look.

At one point, Hauri brought an inflatable alien to the stage, explaining that when the Area 51 raid occurred, he had sex and a child with an alien. He addressed the blow-up as his son, named “XJ9-74!”, and threw it into the crowd, telling them to take good care of him. When the blow-up popped, Hauri lamented that the crowd had punctured his son’s lung (but that, as an alien, he was resilient). It only got wilder from there.

Hauri had to pause his set more than once because several people at the front of the overflowing group were being crushed by the raucous crowd. “I know that it’s negative that people are getting hurt, but it also means y’all are going crazy,” he said regarding the several crowd removals.

The crowd sang along as he closed the set with “Mr. Clean,” the song which uses sampling from the 1950s hit “Mr. Sandman” and landed him a name in the business, and he dove into the crowd—despite knowing full well it was against the rules.

The DePaulia had the opportunity to interview Hauri before his set. Here’s what he had to say.

You’re from the Midwest, right, Rochester?

So did you ever come to Lolla?

Nope. A lot of friends would come; I almost went. I went to SoundSet. SoundSet was like the Minnesota festival. I was here yesterday. We went to a few sets yesterday. Watched Gary Clark Junior and those guys and wanted to see  Tenacious D really bad but we had to leave. Yeah. So that was dope. And like all the backstage shit has been sick. Firefly was the other festival that was as legit as this one.

Yeah, totally. So tell me a little bit about your background and everything. How did you get into music — I guess specifically rap — and how did you get from college, you know, just messing around with stuff, to Lollapalooza?

I was always a big huge rap fan growing up and was really into soul music. When I was in high school, I would just get home from school and go on YouTube and like find a bunch of music. And then, I mean when I was in college I had all these — I was trying really hard at all these different jobs, trying shit out. And I was like, I don’t really like this nine-to-five shit and all that.

I worked in a startup accelerator and I was like the marketing guy, so I was helping all of these cool, new inventions come off the ground because they didn’t have good marketing and I would help them rebrand or whatever. And I was like, “Yo, these people are putting all this money into starting a business, buying some patents and shit.” I was like, I could just do this on Soundcloud and just make it work myself. Did that, and I was already rapping with my friends and shit, just not recording it. And then, I love the style of samples and trap beats, and nobody was doing that— so I started doing that.

How do you pick your samples?

I use all my favorite types of songs. Shit that I’ve listened to. I mean I would listen to like— I was really into like 70s, 60s, 80s like funk and soul and all that. I would just find songs that I love and I’d to send them out to my few producers that knew of SoundCloud and be like, “Yo, can you flip this in a song?” Over time it evolved into being in a studio, like, “Yo, let’s chalk this part of the sample, let’s do this, let’s make this type of beat, bang this bar— whatever. And then, now, because I’m on a label and shit, with all the legal shit, we like to make our own compositions.

How did you pick the name Yung Gravy?

Smooth, it’s smooth. Oh yeah, I mean, I was just like rapping with some friends and the name kind of came about. We were free-styling — we were at summer camp where we’d just smoke weed after the kids went to bed and rap about whatever — and I said, “Come through smooth; call me Yung Gravy,” in a freestyle and it stuck from there. Before that I was Mr. Butter, and then gravy.

Your music has that funny kind of vibe. How did you get into that?

[My friends and I] were just f—ing around. That’s how I would always rap, then when I was at legit studios, that was just what would come out of my mouth. And I’d be like, I don’t want to change it because it’s fun and made me happy, so I was like, let’s do this. I feel like a lot of these artists are trying now to do the “funny rap” shit, going into a song, like, “Yo I need to make a joke about like Area 51.” I feel like they try to make a joke and then make a song out of it. But I would go really hard at making a dope beat and creating all these flows. I would freestyle gibberish on a song to get a whole top line and make it sound good, and then, the lyrics are kind of just what comes to my mind. It’s not like a joke, it’s just like the punch lines just work. I don’t wanna say the same shit as everybody else.

I read that your identity was a secret at first. Why?

Well, I was rapping about f—ing moms and like f—ing my dentist and all this shit. I don’t know, I had a female boss—all this shit was just like, it could be weird if Maggie finds out that I am rapping about this shit. I was working a good job that I liked; they were gonna give me a job after school to work at a startup accelerator as the head guy in Madison, so I was like, f— it, I don’t want to lose that. So then until I really could see that it was like big potential, I would just hide my face.

I had a show—they put me in Madison to perform when I was on probation so I couldn’t make it; I was in Montana—so then I paid my friend to go perform for me with a mask on. He bailed last minute, so I was like, “Yo, bring a pot of gravy on the stage and just play my music. And then the venue got mad. So I never actually did that type of shit, but yeah, I was like f— it. This was what it was going to come down to.

Do you feel like the stuff that you come up with is just in and out of your head? Or is there a process?

It’s usually like, “boom, boom, boom,” but I’ll just drop a shitload of ideas, and then the ones I like, I keep.

So your music is very confident, I would say—you’ve got some pretty bold lines. Do you feel like that comes from being that confident yourself or did you have to come into that?

You know, it’s funny, because I mean I was always confident but then I obviously exaggerate in the music and then. I thought that by doing that, it would just be kind of funny, but everyone takes it seriously and everyone’s like, “Oh my God, he’s the coolest dude ever, he did all this shit.” All of a sudden it’s like now that that brand is out there, that type of shit that I rap about starts happening to me all the time. It’s like M.I.L.F.s are hitting me up and shit— it’s weird! I was rapping about it –it’s like fake it ’til you make it, but I wasn’t really faking it – and it just starts happening.

Did you expect for [your career] to turn into all this?

My goal was — dude, I love rap and I love some of these artists. I was super obsessed with Currency, Freddy Gibbs and all these rappers that all I wanted to do was get big enough to where I could meet them and maybe do a song with them. And then probably about a year ago, I surpassed them numbers-wise. I was talking to both of them, and I was like, “This is ridiculous.” But it’s turned into so much fun.

What, as of now, do you think is the biggest dream you have for your career?

I’d love to do something crazy like bring disco back. So right there if I could get, f—ing, the whole Saturday Night Fever soundtrack and every artist on that— get Maxine Nightingale, get like the Bee Gees on an album— and to bring disco back but make it some bangers and have that become the new way by like 2022, that’s the goal.

Shout-out to DePaul— I partied there one time and it was good. I like y’all.